The Many Faces of Sacamano

First, I want to state emphatically that this post does not represent a return to the over-the-top karmic retribution discussions that characterized the Oilogosphere during the first three rounds. It is my stated opinion that the Oilers are now immune to any sort of gaffs on the part of their fans. We've done our part, friends; it's all in their hands now.

Having said all that, I'm still devastated that I was forced to shave my playoff beard -- especially given that 'Canes supah-fan d-lee was spotted on TSN sporting massive growth and a sign reading "My Beard Believes!" Alas, for several reasons it had to be done. I'm more than willing to do my part for the team; but it seems to me that anal probes are well beyond the call of duty, and I'm going through security at eight airports in the next two weeks (Edmonton, Calgary, Chicago, Sheffield, Heathrow, Sheremetovo-1, Sheremetovo-2, Irkutsk). Goddamned hippies don't fare well in airports these days, especially when their passport/visa photos are sans beard.

However, given that I was the one who handed out the pitchforks when Grabia shaved his beard, and given that I previously noted that removing a Playoff Beard should be done in stages, I thought I better man up and document it--ensuring my public humiliation for generations. Afterall, if I could recognize d-lee in a quick flash on TSN after only ever seeing one photo of him on the intarweb . . . .
See how giving I am? Consider this Part II of Beard Talk. 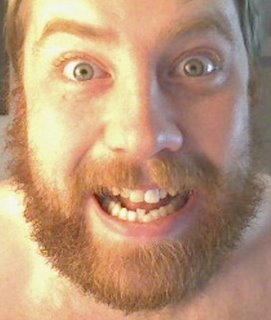 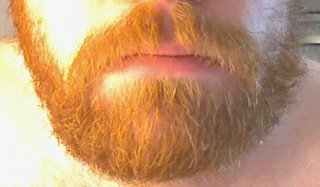 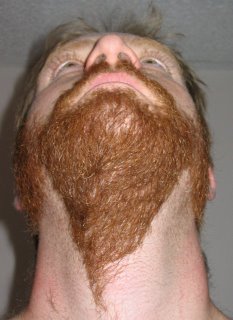 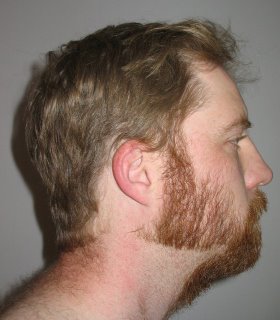 I woke up really late and was in a huge rush to get to an interview, so it isn't exactly symmetrical; but I still like the overall effect. I'd like to try this one again sometime when I have more time. Let's call it: Billy Goat Gruff with a Sidecar. 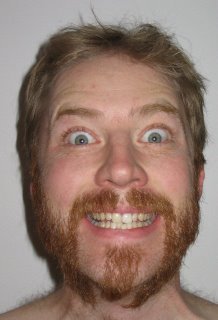 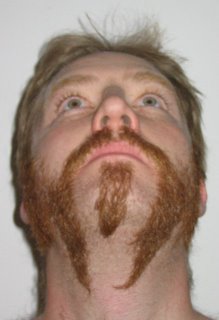 Beard Removal Stage 3:
Again, the symmetry is off; but I love this one. Man I look tough. Look tough? Man, I was tough when I was wearing this thing. I'm going to call this one: The Devil's Trident. 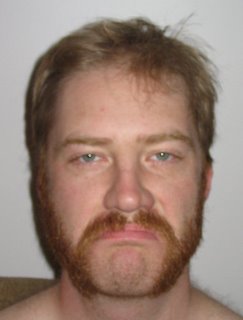 Beard Removal Stage 4: A rather pedestrian set of Friendly Mutton Chops. I like this one when I feel that I need to remind people that I ain't always the sweet mellow dude everyone thinks I am. Friendly, indeed. 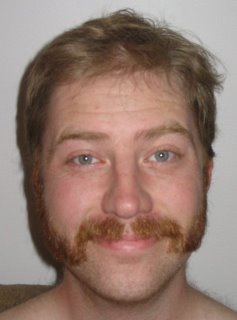 Beard Removal Stage 5: This one is kind of a Franz-Josef, only a little more parallel. I like this look too. It makes me feel like a jolly German accordion player in an Oktoberfest Oom-Pah band. And really, who doesn't want to feel like one of those guys once in a while? 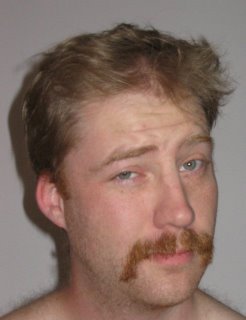 Beard Removal Stage 6: Sacamano Suave. This one's a lady killer. It has the same magnetic powers of a Stage 4 Beard -- except that you really have to pick your nightclub a lot more selectively. 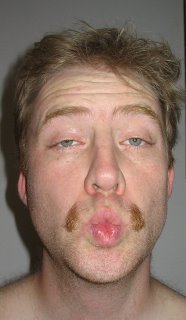 Beard Removal Stage 7: Mrs. Sacamano calls this one, "You're such an idiot, I can't believe you are making me take all of these photos, don't you have an interview to get to this morning?" I prefer, the Manchu Pucker, but whatever.

And, finally, the end result. See ladies, that's the beauty of a playoff beard -- it always comes off at the end of the season, and your man is just as hunky as ever. 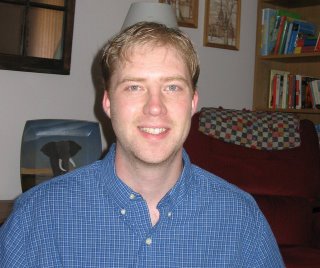 
I'm gonna guess that the hilarious, self-deprecating documentation will cushion the terrible karma blow here, but if anything bad happens to the Oilers there is definitely going to be a Siberian re-enactment of The Most Dangerous Game.


I think the fact that you kept the neck-beard buys you some extra karma that will transfer to the finals.


Sweet Mother of Christ, my ever-lovin' Oilers are in the Stanley Cup Final. Just think about it: back in March every single one of us would have been happy to just see them ease out of the 1st round gracefully (give me a break - none of you, not a one, expected them to even get to the semis in your wildest dreams). And now this. Where in Mary's did this all come from? The last time this happened I still had hair. The next time it happens I could be using a walker...so I'm bound and determined to enjoy every damned minute of the wait between the two series.

Long layoffs and travel (just look at a map of NHL cities for Chrissakes!) have never, ever had a bearing on Oiler performance. So don't fret about the longish break. If a team ever needed a long break before the final battles it was our sick and thrashed ice soldiers.

Concerned about lucky beards, repetitive routines, emerging talismans and the order you put on your socks in the morning? Same thing. Don't worry about it. Wear a Flames jersey the next time you watch the game and it still won't matter a whit (OK, just to be safe though, I'll be wearing my '87 plain home logo t-shirt which has an 11-3 record during the post-season thus far).

Oilers playoffs impacting my professional life? Check.
Raising some troubling 'Jekyl & Hyde' questions from my wife and family? 'Fraid so.
Damaging my health (and especially) my liver? Yup. And I wouldn't have it any other way. Pathetic but true.

Wings? Sharks? Ducks? 'Canes?
Doesn't really matter who the club lines up against at this point. The only team that can beat Edmonchuk over 7 games is Edmonchuk.

The Oilers-'Canes match-upshould provide some great, fast shinny entertainment and there's some good Carolina/Edmonton connections. Weight was a stand-up loyal captain during the franchise's leanest years and I always liked the guy. Well, I always liked all of our el capitans, even back in the WHA.

Oilers in six, my faithful friends. It's been an agonizingly long wait and we have at least a 50% chance of sweet, sweet exctasy two weeks to come.

Ryan Smyth is the Second Coming of hockey, if not Jesus Christ himself.


Sac, James is going to be very, very disappointed in you. You had the chance, yet chose not to create a french fork.


A magnificent act of documentation. If only it had been over seven days.


You think when the US military (or whoever it was) started sinking millions of dollars into this "internet", they realized the purposes to which it would someday be put?

This is one of the dumbest posts I've ever read and it's saved only by it's undeniable brilliance.


Those Caniac hacks lifted our usage of the term "beard mojo." Oh, it is so on.


I can't help but notice that that guy spells it "Sabers" as well-no doubt a shot at us.


Wow, am I going to have gigglish nightmares tonight. Great stuff.

From woodshack maniac in the first photo to buttoned-down Normal Man in the last.

I'm sure the wife is very happy.

Stage 3 is also known, technically, as the James Hetfield Stage.

Dude.... You realize that you don't have to actually travel to Irkutsk to fortify the armies. It's just a board game.


True. You just shuffle a few over from Alaska.


Dude.... You realize that you don't have to actually travel to Irkutsk to fortify the armies. It's just a board game.

True. You just shuffle a few over from Alaska.

No way, man, you're thinking of Yakutsk. Irkutsk is the key to Central Asia.

You're both thinking of Kamchatka, which can be invaded from Alaska


From hobo to trailer trash to dull suburbanite in 60 seconds. You ought to work in Hollywood.


Haha, Colby, you caught that as well! Stage 3 IS the James Hetfield stage!


Sometimes you make me proud but sometimes ...


I would've stopped at... Manchu Pucker... but I know how the wifey thing works.