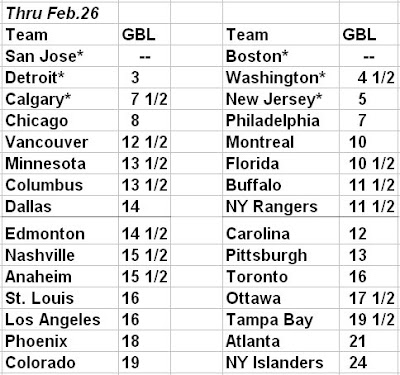 **So Colorado and Phoenix are now done (anyone care to Photoshop an Avs logo with a fork sticking out of it?). Puck Daddy stole my thunder with a comment in yesterday's Headlines, which is all the more appropriate and hilarious given last night's games:

It's OK to laugh at Adam Foote for being stuck on a losing team after the shenanigans he pulled at the deadline last season, right?

Yes, yes it is. I'd love to hear Ken Hitchcock and/or Scott Howson comment on Foote's take about being ~eliminated from the playoffs with a quarter of the season to go (italics mine): "This isn't fun. But it reveals character. It really does."

**Has Andy Murray shed his reputation as a guy who gets quit on, or whose message really wears out? I hope so; between games he always seemed like a pretty good guy. 7 Fridays ago, the Blues were in 15th place: 4-1/2 games out of 8th, and 2-1/2 games out of 14th. Since losing to the Flames on Jan.13, they are 11-3-5 (2-5 in OT/SO). And there doesn't appear to be much luck to it; just sound play at EV and on both special teams, backed up by excellent goaltending.

**Dept. of Happy Endings? Since I posted that stomach-churning graph of Kipper's performance since the lockout, his EV SV% is 0.931! Which is doubly good since the Flames aren't carrying the shots battle with as much regularity since then. (Kent noted this somewhere, but now that he's the King of All Media, I don't know where to find it readily.)

**Coming back to earth would probably be overstating it a bit (especially given that they've won their last 2 games 12-1), but the Bruins have settled down a bit. We'll see what happens in the last quarter and with the trade deadline, but I suspect come playoff time that -- regardless of the fact that they're the #1 seed -- they'll be clumped in with the Caps and Devils as, roughly, "clear favourites in Round 1, but then anyone can win".

There is really only one thing that I care about re: the Flames right now, what with them being essentially welded to the 3-seed already. It's whether Daymond Langkow's hand is OK.

Like every Flames fan, I've really liked Bourque this season, but I think he's replaceable (not readily replaceable, but the team can mostly make up his contributions internally). Giordano's injury is pretty upsetting -- who he is is not replaceable -- but again, I hope his contributions are replaceable. His outshooting numbers are stupendous, but my sense is that they are in part an artifact of the Flames' depth forwards outplaying the opposition's depth forwards (a common theme of the season). Also, a reasonable facsimile of either of these players is probably available via trade if need be, and they wouldn't cost the sun and the moon.

Langkow, on the other hand, is irreplaceable as far as I'm concerned. There just aren't that many NHL centres who can do what he does, and what few of them are available and affordable (contract-wise) would not come cheap in trade. I sincerely hope that his hand injury isn't serious, and further, that he gets as much time as he needs to let it heal.

David Van der Gulik makes his NHL debut for the Flames tonight. This is great news. He's a plus player on a bad AHL team (again), and apparently plays a checking/PK role to a large extent. I think there's a real possibility that he shows well enough to not only prove he belongs in the big leagues, but also to edge Eric Nystrom out for a 4th-line role once some new and healthy bodies are back in the mix. Nystrom doesn't tick you off with anything he does, but he's a borderline NHLer who will never be more of a player than he is now. Mr. VdG is a 0.5 pt/gm player in the AHL at age 26 who plays a good two-way game; there's plenty of reason to think he's a better option than the 26-year-old, 0.15pt/gm Nystrom.


Which is doubly good since the Flames aren't carrying the shots battle with as much regularity since then. (Kent noted this somewhere, but now that he's the King of All Media, I don't know where to find it readily.)

heh. I believe I noted it in my recent "State of the Union" address at my SBN place.

re: Gio's outshooting numbers. It'll be really interesting to see how Vandermeer's corsi figures look for the latter part of the season since he'll essentially be playing in Giordano's shoes. The difference between the two might give us an idea of Gio's contribution to outshooting I think.


Even though I love the guy, I might still be guilty of underestimating his value (i.e. giving context too much of the credit for his quality underlying numbers).

A quick boo at Johnson's site, which shows how much ES time Gio has played with every other Flame, shows that it's pretty spread out. Or rather, it corresponds with the ES TOI of the forwards in general. So he's certainly not playing w/ 3-line and vs. 3-line exclusively, by any means.

The only real clue bolstering the position I took in the post is that he has not played with Regehr at all, i.e. his time against the *best* forwards has been minimized. But other than that, there's really no evidence that he's a passenger when it comes to Corsi etc.


This is the link I was referencing, though the site seems to be down at the moment.


Okay. Not sure how to ask this without sounding like a whiny little twerp. Matt, I think you're doing a great job, I love BoA, it's still on my one-stop shopping list for all my hockey blogdom, you, Andy, and Sacamano have nothing but my endless respect as hockey writers!

Are you planning to bring in a "full-time" Oilers writer again? Again, your work is great, but the actual Battle in Battle of Alberta lent the site a certain je ne sais quoi that all the superb, well-researched and well-thought-out Matt posts in the world can't make up for.

God, I hope that was obsequious enough. :P


Good show btw Matt having Ron acknowledge your move to Edmonton on CBC.

Lord Bob, you could always apply for the job once you drop your blogger profile linking to a URL firefox designates as an attack site...


Anonymous, that's a bug in a) Blogger, and b) Firefox.

It's a bug in Firefox because, being the login page for my blog, it is perfectly safe. :P