Baseball/graphical standings, for the first time this season: 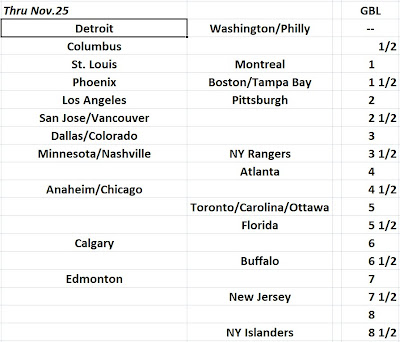 The east is balls once again. The Central is absolutely vicious. And the NW... is more like the East than the Central, it would appear, though two of the three most smashing victories the Flames have achieved this season have been against the Central.

Anyway, has anyone noticed that there are a lot of parallels between the Flames right now and the Flames of three seasons ago? In late November & early December, things were grim. The Flames were losing, and going through that odd scenario where every time you thought they were losing the "right way" and about to break through, they would snap it not by actually winning, but by losing convincingly and depressingly.

At rock bottom, or thereabouts, I looked at their chances, and determined that (a) they were real but not great, and (b) the key was to stop losing so much (blinding insight, I know). Regulation losing streaks are season-killers. Shootout and OT losses feel bad, and are a missed opportunity, but you only lose a fraction of the ground on the pack.

The 07/08 Flames, after stopping the bleeding per the above with a W and a couple of OTLs, headed out on the road for some afternoon delight that saved their season. They still had some rough patches, but ended up playing their best playoff series since the lockout, and quite possibly would have upset the Sharks with some better goaltending.

Right now, the Flames need a few more bounces and a few more saves, and a dozen-or-so-game stretch with only a couple of regulation Ls. The pack is well within reach.

My motto's always been when it's right it's right, why wait until the middle of a cold dark night...

Another instance of Colin Campbell becoming involved with Florida games?

Well. That certainly got a little out of control. For all your hosting needs, I do not recommend Canadian Web Hosting. If you're tired of this Colin Campbell business, I recommend Mike Winters' fine cartoon below.

This all exploded so quickly that I didn't really have time to follow up on something that I wanted to follow up on with respect to the original post. While I was getting around to that, Dean Warren went on the Fan 590 today and was interviewed by Greg Brady. During the course of that conversation, he said, in part:

I'd called a penalty late in a game against Florida. Stephen Walkom was the director of officiating at the time and he called me the next day. He said "Mr. Campbell doesn't think it's a penalty." And I said, "Well, the guy ran him down from behind, the player got hit, went head first into the boards...I don't know how you can't call it a penalty...as a matter of fact, I kind of wondered 'Should I be giving a game misconduct as well as a penalty.?'"

I do know at the time, Stephen Walkom said 'Look, if I gotta listen to Colin Campbell anymore, I'm gonna slit my own wrists.' So, it kind of gives you an indication that Mr. Campbell was certainly ruling or making decisions on games involving Florida and his son's team.

The initial reaction to what Warren said has been guarded, in terms of people accepting what he's saying as true. That's understable given that the NHL has made its position clear - Colin Campbell does not get involved in this sort of stuff. Greg Wyshynski said that Warren's "...opinions and his recollections have to be taken within [the context of the dispute over his firing]. Elliotte Friedman, on Twitter, commented: "I don't believe it. Here's why I have trouble with Dean Warren claims: 1) in his own hearing vs NHL, judge did not believe Warren's testimony...and [t]oo many referees who are at odds with NHL/Campbell say there is no fire to favouritism issue."

Curiously, there was a comment that got slammed in the deluge of my website that pointed out a mistake I'd made in compiling a list of Dean Warren's games and what would appear to be a third instance of Campbell intervening in games involving his son. Strangely enough, if you read it with Warren's comment above in mind, the circumstances surrounding this instance fit perfectly with what Warren said.

This issue arose out of the email exchange referenced below, which the alternate chair prefaced with the following passage: "The first contact which occurred after Mr. Warren’s election to the OA executive was on October 23, 2006. The names of players, coaches, club officials and teams have been redacted. In the first email Mr. Walkom reports to Mr. Campbell and Mr. Murphy about the coaching he gave to Mr. Warren:"

Just a few updates: spoke with [general manager] from [club] and general manager from [another club]. some concerns, different guys and different situations………. Spoke with Warren about the hit in [city] he felt he left his feet….told him all guys leave their feet but this player glided and took care in hitting the player legally…he understood and further was instructed to see the whole play and that players look for calls which is what happened on this play….in regard to [player] both officials have been spoken with and that open ice hits are generally allowed on one on one battles and for him to have two over called is the exception and not good….

As "Qris", who writes "Pass it to Bulis" points out, when I did my piece of dot-connecting, I missed something:

It looks like there's another one. The first emails you posted regarding the incident in October have more details... while the dates have been hashed out, the correspondence is said in the ruling to have taken place on October 23: "The first contact which occurred after Mr. Warren’s election to the OA executive was on October 23, 2006."

This is big, because the email from Campbell says, "This guy is in serious trouble. He will be in trouble as soon as [coach or general manager] sees him tonight…they will think you are shoving it up their ass." That means it's referring to a game THAT NIGHT in which Dean Warren officiated. That would be this one, a game taking place in Florida. You omitted it in your schedule for Dean Warren.

This is pretty sexy because of this boxscore of the previous game, two days previously, between Atlanta and Florida.

As far as the timeline goes, we know the game that Campbell is referring to is the Oct. 23rd game, which means we know he's probably upset about a penalty in the previous game.

While Walkom's email says it's a "few updates," indicating it's not all on the same subject, the part mentioning Warren states: "Spoke with Warren about the hit in [city] he felt he left his feet….told him all guys leave their feet but this player glided and took care in hitting the player legally…he understood and further was instructed to see the whole play and that players look for calls which is what happened on this play"

Because he "felt he left his feet," the call was clearly one in which leaving one's feet would be a factor, yes? Thus, it's likely a boarding or roughing call. There were two such calls in the Oct. 21 game. One was a boarding call on Martin Gelinas.

The other was a roughing call on Gregory Campbell.

The only way I can think of to confirm this would be to find old video of the game. While what we have isn't definitive evidence, the call Campbell was upset about definitely happened during the Oct. 21st game between the Panthers and Thrashers, which leaves 14 possibilities. It was definitely one in which leaving your feet would be a factor. That likely only leaves two: the call on Gelinas and the call on Gregory Campbell.

Colby Cosh, in a comment that he emailed to me after he was unable to post it due to the firebombing of my website, pointed out the following:

Judging from the newspaper accounts of that 10/21/2006 game, the Gelinas call was the controversial one. Campbell's roughing penalty isn't mentioned, but Gelinas and Jacques Martin were livid about the late boarding penalty. From the Miami Herald:

The call, which coach Jacques Martin and Gelinas questioned, put Florida down a skater in the most crucial part of the game. ..."It's a tough call; we were battling hard," said Gelinas, his voice uncharacteristically rising as he spoke.

"I was coming at full speed, and [Vishnevski's] fumbling the puck. That's [tough] for the referee to understand that. Am I supposed to put the brake on and let him control the puck and move on? I don't know. I think it was borderline and it was a big game for us. It's unfortunate."

Said Martin: "That was an unfortunate call at the end. It really took away a chance for us. I think it was a questionable call, a judgment call. Marty just finished a check."

I think it's pretty safe to assume that the game that Campbell and Walkom are discussing is the game that occurred on October 21, 2006. All of the pieces fit and, again, it's not like there's a huge list of games from which to choose.

Which brings us up to yesterday. TSN obtained a statement from Bill Daly in which he said, in part:

Because of the potential for a conflict of interest, or more importantly a perceived conflict of interest, the League has implemented various structural protections that prohibit Colie from having any oversight or disciplinary authority relating to any game in which his son, Gregory, plays. Its always fair to question and criticize League decisions as being wrong, but not on the basis that they aren't justly and fairly arrived at."

"In the execution of those rigorous and challenging duties over 12 seasons, Colin has been thorough, thoughtful, professional and scrupulous; his integrity has been impeccable, and he has no role whatsoever in matters pertaining to games in which his son plays.

On the basis of this, don't know that there's anything up for dispute other than the contents of that conversation between Walkom and Campbell, something on which we have one side of the story. Everything other detail seems to be independently confirmed. In the 1:23 pm email, Campbell sends a profane message to Walkom, telling him to talk to Warren about the upcoming game. The schedule fits with the games mentioned. The incident mentioned in the schedule fits with the games. Walkom tells Campbell that he phoned Warren.

In short, there is no reason to think anything but that Walkom had phoned Warren at Campbell's direction, immediately in advance of Warren officiating a game involving Campbell's son. You don't even need Warren's story for this - it fits with the timeline set out in the emails and the decision. Warren's suggestion that he was told that Campbell didn't think that the incident in the first Florida game was a penalty has at least a ring of truth, given that Campbell says as much in his email. Did Walkom say: "Look, if I gotta listen to Colin Campbell anymore, I'm gonna slit my own wrists"? I don't know. At present, we have Warren saying that he did and nothing else to corroborate it.

To bring it back to the NHL itself, quite apart from the question of whether or not Walkom said what he is said to have said (and it would be interesting to know what, exactly, Gregory Campbell did to get that roughing penalty), this would seem to be what Bill Daly means when he says "...he has no role whatsoever in matters pertaining to games in which his son plays" and "...the League has implemented various structural protections that prohibit Colie from having any oversight or disciplinary authority relating to any game in which his son, Gregory, plays."

That's one way of putting it, I suppose.

The Edmonton Oilers are a grim spectacle 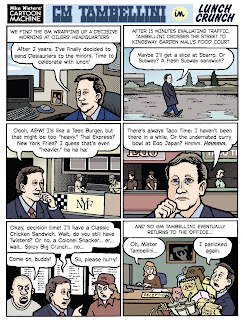