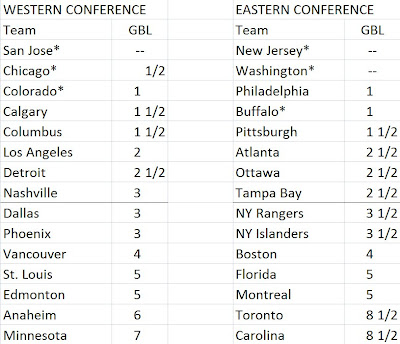 I'm not actually down on Dion Phaneuf. He can do things that few other players can do, and by my eye he makes incremental progress in his all-around game and decision-making.

Occasionally I have this dream where he gets dumped by his girlfriend, and is so goddamned mad and frustrated that he goes on an absolute tear: the kind where he becomes the player Pierre McGuire always thought he'd be, and possibly becomes hated by other NW fans for real sins, rather than imagined or trivial ones. But whatever. He's frustrating sometimes, but it's not often that I slap my forehead and say I can't believe we're paying this guy six-point-five mil a year until 2014.

But the facts are facts, and here are the two important ones:

ONE. The Flames need another difference maker at forward. And not just this season, but going forward as well, so it needs to be someone in his prime or just about.

TWO. Phaneuf's role, his wage, and the team's needs no longer align. Here's something I wrote in July 2008 that gets at my point:

I have written before that, while there is no magic formula when it comes to signing free agents, there are pitfalls to be avoided. They include [...] paying for offense from more than one defenseman, which is why I'm pretty skeptical about the Brian Campbell signing by the Hawks. On the one hand, their PP was pretty lousy last year (24th), and they don't presently have a clear #1 point man who can shoot, distribute, etc., so maybe he was a smart acquisition, in the same manner as he was an excellent acquisition by the Sharks last season. On the other hand, Seabrook and/or Barker are supposed to be growing into that role, and they already have a "do-it-all" d-man in Keith. The Campbell contract only makes sense if he provides a huge marginal advantage over the alternatives, and I'm not at all sure that he does. (And this is setting aside the too-long term, and the fact that he looked very ordinary in the playoffs.)

I think the backup G position is important. You want that guy to be solid when your #1 needs a break, and if there's an injury, well, god help you if you're unprepared. But that doesn't mean you go out and sign the best available goalie next July to be your backup, because on balance, you can't afford to devote those resources to that position.

To a lesser extent, this is the situation in Calgary on D. When Darryl Sutter signed Jay Bouwmeester on June 30 to a five-year, $33.4M deal with a NTC, he made the decision that JB would be heading up the blueline for the next 5 years. He can't afford to pay Dion Phaneuf to play the "Jay Bouwmeester" role, because he now has Jay Bouwmeester filling that role.

(Yes, yes, Pronger and Niedermayer won a Cup together... I believe those Ducks also proved that being the toughest, fightingest, penalty-takingest team was the winning formula, which is why the Maple Leafs are leading the Eastern Conference and are prohibitive favourites to win the Stanley.)

I think Darryl Sutter needs to shop Phaneuf for an elite young forward. There might be a few good reasons, but the important one is, It's what's best for the team.


This was brought up in the off-season, but Robert and I had a brief back-and-forth in the comment of the game last night and (again) came to the conclusion that the Flames have to re-allocate some dollars up front.

Phaneuf is the most obvious guy to move. He'll get the best return, despite the hefty pricetag.


From an outsider perspective: This probably wouldn't be an issue if Jokinen was any good.

Maybe you would still need a forward, but it seems like the biggest misappropriation of $ on the Flames is Jokinan. (which is probably something you guys already know).

More selfishly I'd hate to see Phaneuf traded. I enjoy disliking the Flames, and it would be harder to do if they somehow traded my least favorite player in the league (and most overrated!) to another team


This probably wouldn't be an issue if Jokinen was any good.

It would certainly be less of one! If he was one of the top 50 forwards in the league, they could be working on a contract extension right now.

But the way I look at it, Phaneuf + Jokinen = $12M. Even using $2M-$3M to pay a cheaper player to sub in for #3 on the roster, the $$ left over can pay for anyone you want (or Best Player Available). Kovalchuk? Spezza? Jeff Carter? No idea, but the point is, ability to pay wouldn't be a road block.


If you're looking for $3M defensmen, I'm sure the Avs would gladly part with Brett Clark! =)

That said, I don't know what I'd do if my least favorite player were traded to my favorite team.

Probably lots of beer and lots of booing.


I'm not sure if I agree with you (even though if forced I would much rather trade Phaneuf than JBow).

However, the real problem (Jokinen) is off the books as of next year anyway, so why jump the gun?

If you play it right you have an elite level defenceman on the ice for 50 minutes or so of 60 minutes. If you ask me that gives you a pretty good chance of winning on any given night.

They haven't played together at EV in any meaningful way all season. It isn't helping, at least not against a team that out-guns the Flames as badly up front as the Hawks.

Top ten forwards on each team when they're healthy. I can't say that's a comparison that warms my heart.

I suppose, as Kyle says, you can wait for Joker's contract to clear, but that means this season is pretty much another one of one round and out. If I thought they could move Sarich and accomplish the same ends that would obviously be preferable, but I don't see that being in the cards. With that in mind, I have no problem with moving Phaneuf, and said as much in the summer. Whether you can actually get the sort of player that would help, like a Kovalchuk, is another matter, of course.


Send him to Toronto. You can have Stajan, Blake, Beauchemin, Grabovski....take your pick...even Komisarek. Maybe those guys would play better in a Sutter-run system....you know....where you DON'T give the puck away and DON'T take stupid penalties....


It isn't helping, at least not against a team that out-guns the Flames as badly up front as the Hawks.

Robert, its not that I don't think what you're saying isn't true, but there isn't any comparison group here.

It's hard to prove if it's helping the team to have an all star calibre defenceman on the ice for almost the entire game, but I would bet if the Flames had Cammy and Lombo instead of Jokinen we wouldn't be having this conversation.

And while I also think that it's possible the Flames could lose out the first round (as is always possible, even with great teams), IF that does happen I would rather keep both guys because I think we have a better chance to win a cup with two great defenceman rather than one.

To me, this debate is being portrayed the same as if the Flames had two number 1 goalies, which I think is a waste. One will always be underutilized. However, I believe both defenceman can be utilized efficiently.

Just my opinion though.