As usual, I have no inside information or particular insight, but it looks to me like three things happened these past 10 days which, cumulatively, have thrown a monkey wrench into Darryl Sutter's medium-range plan for the Flames roster.
Sutter has long been aware that Phaneuf will be due a big raise, but these events have certainly made Phaneuf more expensive. They have also introduced an element of risk (and of urgency) to contract negotiations with Phaneuf, where it probably wasn't a concern previously.

Certainly now, there's no way to get Phaneuf signed to a contract any longer than one year for less than $4M/yr. If they want to sign him to a long-term deal that eats up 2 or 3 of his UFA years (like Whitney's), the price is surely going to be in the $5M range. And that's today: if his form rounds out in the early part of this season (i.e. he takes that next step we've all been waiting for since at least the beginning of last season), the price goes up some more. 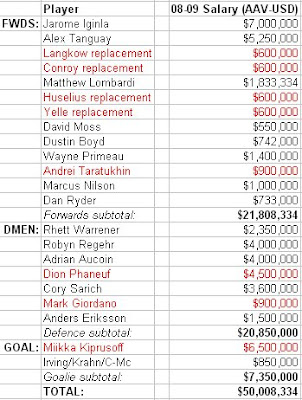 Take a look to your left, won't you? With a few estimates (and players not under contract in red), this is what the payroll for the 2008/09 Calgary Flames looks like in the event that (a) both Phaneuf and Kiprusoff are re-signed shortly, and (b) Langkow, Huselius, Conroy, and Yelle are replaced with "Brad Isbister" x4.

Yes, that total is $50M. I think the cap next season is going to be about $53M, so in other words in the event that you can sign Langkow (or his equivalent) to a $3.6Mx3yr contract -- which you probably can't -- you've hit it.

The best-case scenario here (or perhaps least disruptive is a better description) is roughly that Warrener leaves for prospects/picks, and Phaneuf & Kipper get squeezed even more than what I've shown. Then, instead of having $3M to replace the 4 forwards with upgrades from Brad Isbister, you have maybe $5.5M.

If Moss, Boyd, and Taratukhin all impress and perform this season, maybe that ain't so scary. But it still looks to me like the most likely eventuality is that Kipper is not re-signed (let's hope Irving has a hell of a year in the AHL).

The scenario that is still pretty remote, but much more likely than it was two weeks ago, is Phaneuf being dealt away in the manner of Havlat or Tanguay. This doesn't excite me at all, but when the numbers are right in front of you and the nearly unavoidable alternative is starting a goaltender in 2008 who is a career AHLer (Krahn/C-Mac), or a 2nd-year pro (Irving), or some proven mediocrity (say, Raycroft), it's a lot easier to swallow.


So you say Calgary is going to spend to the max? I don't think they can do it even with there over priced understaffed watering hole.
What do I know... the fortunes of some of the key owners may suffer from the Gore effect.
Another thing Calgary's logo is not Green friendly.


So you say Calgary is going to spend to the max?

Well, yes. As far as I can tell they have both the means and the motive.


I realize the situations are slightly different, but who's to say Phaneuf doesn't take the same alleged discount Regehr just did?


Well you could sign 'em, trade 'em at the deadline or roll the dice on a RFA offer sheet and then take the draft choices. I think the Flames want Dion around, and if Aucoin can play 75% of his games without injury, he could get dealt if the Flames can do something late in the year. Then fill in with rentals for a cup run this year.


Phaneuf will slide this year, and will end up being a 2.5 million player in the league for his career. He didnt improve last year at all, and looked awful in the playoffs. Trade him while he has some upside and spend the money on Kipper. Without Kipper, the flames will go back to missin the playoffs. And as for Raycroft in Calgary, thats funny. Cause in Finland, Kipper is rumoured to be wantin to go to Toronto to play in a real hockey market...


I've been saying (not on my blog) for a while that if I have to trade one of Iginla, Regehr, Kipper or Phanuef, I will trade Dion because:

a) He's the most valuable. Young, still relatively cheap, in his prime. This might have changed with the cheap Reggie/Iggy signings, but I think it still holds weight, (especially in light of the no movement clauses in aforementioned contracts)

b) He's not going to mature at the same time as those other guys. Sure, he may be a Norris winner in 5 years, but that'll be the end lifecycle of this edition of the team. I'd rather go for a lesser guy in his prime now and get a Cup out of it than have a poor team with a great player in the future.

But we shall see what happens because I've seen Sutter pull miracles before, and with Dion there seems to be a very close relationship.

But shouldn't the Falmes dump Aucoin and use the 4 large to distribute to other key players?


Phaneuf will slide this year, and will end up being a 2.5 million player in the league for his career.

I was wondering, does your crystal ball tell you when the Leafs will win the cup again? Or make the post-season for that matter?


Apparently, Satan and Jesus are also rumoured to be interested in moving to Toronto. Apparently, they can patch up their differences for a chance to play for the Legendary Leafs.


Phaneuf will slide this year, and will end up being a 2.5 million player in the league for his career. He didnt improve last year at all, and looked awful in the playoffs. Trade him while he has some upside and spend the money on Kipper. Without Kipper, the flames will go back to missin the playoffs. And as for Raycroft in Calgary, thats funny. Cause in Finland, Kipper is rumoured to be wantin to go to Toronto to play in a real hockey market...


What are the chances that Keenan can make Dion a top-tier defenceman?

He's been out of the playoffs for a while but he's turned a few ordinary players into better players. I'm talking Jokinen, Näslund, Samsonov, Rolston, Van Ryn etc.

I'm thinking Dion could be in line for 25+ minutes and maybe even top 60 points if Keenan digs Dion.


teams evolve. players come, players go. will they keep tanguay around for his full contract if it means losing young guys like phaneuf? no. salaries can be cleared. they can always find ways to make space and if they can't, they can make trades. that's the nhl. why panic?


you can take souray out of the picture, he signed for oilers.