"Some people just don't get it."

SI.com's Allan Muir's take on the top starting goalies in the NHL is not at all the most interesting thing he's written lately. I've been intending to post a Last Word on Pronger for awhile, and Muir's piece from last week seems like as good an excuse as any, because he gets as close to the heart of the matter as a pro pundit has:

"I knew I'd be Public Enemy No. 1," he told the Journal. "But I'm pissed off by all the rumors and innuendo surrounding my leaving."

He's pissed off? Before he started blasting the fans, he needed to spend some time in front of a six-foot-six mirror.

All right, on one hand, you can see where he's coming from. The talk, particularly about his wife, hasn't been flattering. But what did he expect?

What did he expect, indeed. More from Muir:

Pronger can't have it both ways. He can't blame the fans for making an issue of his personal life. He was the one who introduced his family into the discussion in the first place.

If family was the issue behind his trade request -- and no one is suggesting otherwise -- why even bring them into it?

Sure. Considering how accommodating (and prompt) the Oilers were with his request, surely they could have cooperated with Pronger to construct a semi-plausible professional reasons back story.

Alternatively, he could have been more direct: said flat-out (in person!) that he and his family didn't like Edmonton, could not be happy there, and that he had made the hard decision to request a trade as a result. Instead, he went the way he did (i.e. via Mexico), presumably calculated to minimize the damage to his reputation, and the hurt to his family and the people of Edmonton. How's that working out, by the way?

Sidebar-type-dealy: a player's leverage when he requests a trade is the implied threat of non-performance. Implied only, of course, because this is the 2nd paragraph of the Standard Player Contract between the Player and the Club (my emphasis):

The Player agrees to give his services and to play hockey in all NHL Games, All Star Games, International Hockey Games, and Exhibition Games to the best of his ability under the direction and control of the Club in accordance with the provisions hereof.

The only permissible explicit threat of non-performance is the threat to retire; any other is a contract violation. Chris Pronger lacks a certain humility about what he's managed, which I suppose is not surprising from a guy who basically hasn't acted like a man throughout this whole process.

Pronger's implied threat of non-performance was effective, and he suffered no hardship, because there were numerous other teams that were interested in his services at the salary he earns. Other players are less fortunate; Gary Roberts asked for a trade for reasons that may be more or less valid than Pronger's, to no avail. If Roberts was to do what he wished regarding his family, he'd have to quit his job and forsake two million dollars that can never be recovered.

I'll leave the rest to Muir. I'm not much for the fan-populism stuff, but I think he nails it:

Apparently it never crossed his mind to apologize to those in Edmonton -- including TV reporter Christie Chorley -- whose names were unfairly dragged into this whole mess by his evasiveness.

The Journal interview was an opportunity missed, but not an opportunity lost. There will be other interviews, other chances to set things right. Pronger should make the most of them.

And it should be a good lesson to other players who might find themselves in this position one day. You're the one in the public eye. If you're going to make a tough call, you need to be the one to take the heat.

And don't be upset at the fans for caring so much. If they didn't, you'd be out of a job. 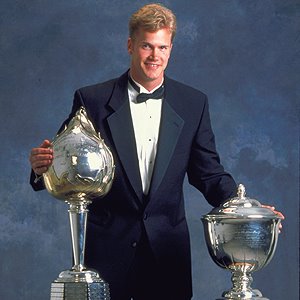 
Muir quite often comes off as a bit of a tool but that was a good article - his take was what my problem with Pronger was all along.

All he had to do was come out and say - I've asked for a trade because of this or that. He needn't even have been specific about the reasons I think - but the whole hiding in Mexico thing and then whining later about the rumours just was kind of cheesy.

You can't have it both ways I think.


This thing seems to be the one area (besides anything canucks-sucking related) where Flames fans and Oilers fans agree heartily.


I'm hoping Pronger receives a harsh welcome in Calgary everytime he plays there.

Hell, it'd be nice if he receives a harsh welcome everywhere he plays.


I am enjoying how this story completely contradicts Belinda Stronach's comments about how women get harassed so much about personal matters.

If Belinda, Domi, and Pronger don't want rumours, and crazy stories coming out about them, then why don't they just stop avoiding the questions and be honest about what happened?


Man,when a Flames fan thinks it's a good take on Pronger-gate, you know it's good.

Might be the BEST article on any NHL issue I've ever seen on SI.com, ESPN.com, etc.

Muir did a bang-up job saying what a lot of people think: this situation wouldn't be the gong-show that it was/is if he had handled it better.

What an Ass FCP is.

I hope he will be treated accordingly by the fans that he disrespected, which is the point of Muir's article.


Anonymous is probably right w.r.t. the Oil, or at least you would think so by how quickly they dealt him and how philosophical their comments were. It's certainly possible that Pronger was 100% standup with the Oil. ("K-Lo, I need a trade or my marriage is going to disintegrate. As long as I'm here I'll try my absolute best, but you gotta know that the family stuff might bother my play despite my best efforts. Please help me.").

But judging by how he handled the public part, who the hell knows.


For what it's worth (not much I know), this Flames fan will be happily booing Christie Prongley this season. And probably for years to come.


l don't agree that he probably handled it well with the Oilers. If that were the case and he was completely upfront with Kevin Lowe, than why did Lowe call up the local sports radio station right after they did an interview with Al Strachan where he insisted Pronger was on the move to refute the claims, only to have the Pronger camp go public the next day with the request (if I'm remembering right). And for that matter why did the Pronger camp go public with the trade request a day before an entry draft where St. Louis had the first pick. I think he was hoping to force the Oilers into trading him quickly, and preferrably back to his in-laws' house.

If Pronger and the Oilers were on the same page the whole time, I don't think that they would have made Lowe look like he was either lying to the media or out of the loop; which is exactly how it ended up looking.


I guess you can imagine a scenario wherein Lowe knows the player will have to be traded, but wants to squash the Strachan rumour for a month or so to sell some season tickets and maximize his chances of getting more-than-fair value back for Pronger and presenting the fans with a sudden and less traumatic fait accompli. In this world-line Lowe is unable, through sheer bad luck, to reach Pronger in Mexico to hush him up--and he gets tossed under the bus by accident. I don't believe that's how it happened, unless Lowe is a galaxy-class thespian, but it's worth considering.


jesse - the team attempted to deny the fact (not rumour). Pronger did not have to let this happen on Lowe's timetable. That's why he went public. I said "while still advancing his own agenda to be moved." Lowe was setting it up to be dragged out. Pronger's side countered by going public.

Lowe set himself up to be proven to be a liar by lying about the situation.


Anon - I guess we've got different ideas of what "as much time as possible to make the best of a terrible development" is. This all happened, what, 5 days after game 7? If we are assuming that Pronger asked to be traded at the player-GM meetings after the season (and I don't think he did, I think he just said that he would probably ask after checking with his family), that makes Lowe's "timetable" no more than 4 days. I wouldn't call that enough time to swing a major trade. Pronger was trying to force the Oilers into making a move, and he didn't care at all if the Oilers got fair value back.


Pronger I always thought was an exceptional defenceman(alibet with an extraordinarily tiny head).

On the other hand, I seriously doubt if Bobby Orr, Wayne Gretzky, Mark Messier or any other of the ture greats would have ALLOWED their teams to lose in that game 7 final game last spring.

In short, something deep inside my hockey brain tells me Pronger, for all his hockey skills, character wise is merely another Mike Comrie clone = a whining selfish shit.

PS: check out how the Ducks fans are nervously talking about Lupul's progress in Edmonton LOL


jessee robbins - The trade took more than 4 days so obviously you have an exaggerated view of the timing constraints. I think the Oilers had all summer and could still be shopping him today - as unpleasant as that would have been. It is Lowe's responsibility to make sure that he gets fair value - not Pronger's. A job which I think Lowe did admirably. There is no protocol to follow in a case like this. Anyone, including Lowe, to expect a superstar with the clout Pronger has to sit quietly by, while management takes it own sweet time to make him happy has a naive view of negotiations. Pronger does not have to play by Lowe's rules. Pronger knows that he has requested a trade, but here's the GM on talk radio saying it's not true. Is he really trying to trade me at all or just screwing with my life? Is he lying to me and my agent or "just" the public? Yes Pronger acted selfishly, but Lowe was the one that lied in public. Pronger shut that tactic down immediately. Better not to trust an NHL GM at his word. He is Anaheim's problem now. Business is business.


Speaking as a Ducks fan, and as someone who's been attacked by a 35 pound monkey, I was sorry to see Lupul go but much MUCH happier to see Pronger arrive.