Keep Your Stick on the Ice!

Ouch. Full credit to the Canes tonight. Their D is incredibly aggressive, and the Oilers just couldn't get anything going towards the net -- although I'm still confused about why they don't just fire everything at Ward, who continues to give up huge rebounds on almost every shot. Samsonov was dynamite, and he didn't get nearly enough ice-time.

In their own zone the Oil managed to stay out of trouble for the most part; but it was pretty damn scrambly and Jussi made a few saves that will show up on TSN. Pronger was . . . shakey. Did I just write that? Pronger? Shakey? Whaaaat? By my count he had three brutal giveaways, including the one that led to Carolina's second goal. And Hemsky? Ahhhh, Hemsky. He is just so close to being a great player, but remains the most frustrating player I've cheered for in decades. My "Shoot the Damn Puck" Meter exploded in the second period. Kudos to the crowd, who -- recognizing that this might be the last time they see the team -- continued to chant "Let's Go Oilers" well after the game had ended.

It is a tough row to hoe now, friends. If there is a team that can do it, I think it is this edition; but they are going to have to find a way to solve that pressure D and to get something going on the powerplay. I have no answers.

Well, that's it ladies and gentlemen, I am outta here. And with more of a whimper than a bang, unfortunately.

I only have a few things left to say: 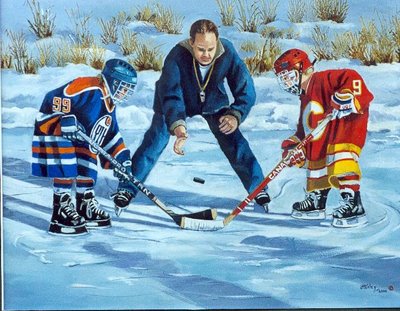 Sorry about the game though.


sacamano - thanks for the great ride - have a great summer and hope to at least see your comments on these threads next year from Jolly Olde. Better find an heir - without the BofA the Oilogosphere will be a far less fun place.

they're not done yet but its a tough hoe to row


I don't know much about that town, but I bet that guy sleeping on his back in that photo (the guy with the massive schlong) gets a lot of girls.

Enjoyed your site very much and your comments too. Look forward to whatever this turns into and be safe you.


Thanks very much Sac. I don't know if you visited my site much, but I sure enjoyed yours. Hate to see you have to leave Alberta for England. Good luck, and Go Oilers!


I was wondering when you were going to use that picture, Hugh. Perfect. Best of luck in the Old World.


Geez, sac...not only do you entertain me all winter, then you give me a big link on the front page as you leave the country. I hope you come back next year for more BoA goodness. Have fun at the ends of the Earth! Thanks for the ride, it's been a blast!


sacamano -- have a great summer.

I've enjoyed the hell out of this blog.


Have a safe trip, and enjoy England... say hi to the Queen maybe she has some mojo for the Oilers Dead Play.... jeebus I have never seen it quite this bad...


congrats downtown. My wife still hasn't forgiven me for the time my second child was born and I wanted to name her Pedro in honor of Pedro Astacio who had just secured my first roto baseball win and a nice downpayment on our deck.


Sac, you have set the bar pretty high. Great work.

Can't wait for the day when my "Battle of England" web searches yield a suitable match.

Thanks for the great reads! Is a blog on footie in the works?


Sheffield? You'll love it, at least I did.

I've only been here a week (what the heck took me so long to discover the 'blogosphere'?), but I've enjoyed your blog every day of it.

Give us updates on Theo. On second thought, don't.


Damn, it's hard to not feel like it's a big wake, and more for losing Sac than the Oilers loss. You and Matt put together the best hockey blog out there, and probably inspired a dozen more (I'm sure Covered in Oil would have languished without the spillover traffic).

Thanks again and good luck. Don't be a stranger.


Thank you for the ride, you and the Oilers made it worth while - hey the flames too.
Take care in Siberia.
I personally understand that blogging
the NHL from Europe it's kind of straining but hope to see you back. As Mike said, don't get lost in the blogosphere.
Go Oilers! No quitting, this is the year to come back 1-3 down.


Well, you've picked one of the premier hockey cities in England- the Steelers apparently have a relatively consistent fanbase, and a decent team, I think. Ironically, this blog has helped me follow the NHL through my year in exile in Birmingham. Thanks, and may someone do the same for you. Good luck, and should you ever want to grab a beer while watching sub-AA hockey, I'm there.


No. This isn't happening. No.


This blog has been an excellent read every single day since it opened, the Oilogosphere just won't be the same without you Sacamano.