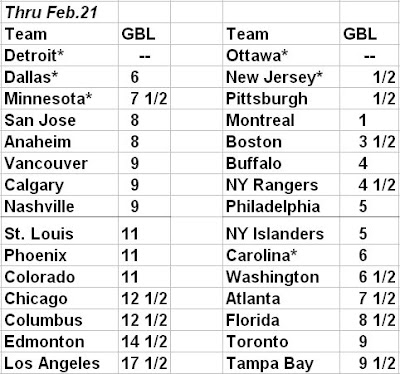 Just an awful Thursday night for the Blues (and to a lesser extent, the Coyotes and Avs). They had been creeping back into playoff contention (4-0-1 in their previous 5), but then lose to the Kings big, and Vancouver beats Nashville -- in extra time, natch -- effectively doubling the gap between them and 8th. Good for the Flames, though! I believe this is the biggest cushion they've had on a playoff spot this season.

Carolina continues to sit a game out in 10th based on their record, and it looks very much like 2 of the 4 teams fighting for the EC title (and well ahead of 5th) will play each other in Round 1; one of those teams shown as 5th-9th will get a presumably easier first round matchup as the 6-seed.

The solution to this unfairness is simple: . Actually, there's only one solution that's certain to be fair: make the conference schedule completely balanced, and seed 1-8 based on record only.

Any rule change you could make to "punish" this year's Hurricanes would certainly create more injustice than it eliminates. It's very uncommon (isn't it?) for an entire 5-team division to stink; the more common scenarios we've seen are (1) a couple of good teams running up a wicked record at the expense of several lousy teams in their division, and (2) a division where all the teams are good. Most rule changes that would hurt this year's SE winner also hurt the division winner in Scenario 2, and helps the runner-up in Scenario 1. Why would you want to do that?

And speaking of competitive integrity -- which (I hope it goes without saying) the NHL should be in favour of -- I see Jean LeFebvre is the latest in a long line of guys with the opposite pet peeve to me:

* Abolish the shootouts. Or since there’s no chance in Helsinki of that happening, then make it all or nothing. Shootout proponents say the tie-breaking method is great because it’s so exciting. Hey, a rake fight at centre ice between the captains would be exciting if a standings point was on the line but that doesn’t mean it’s a good idea. Anyway, if you must have shootouts, then make them a winner-takes-all affair – two points for the winner; none for the loser. Now THAT’S excitement.

* Straighten up the standings and statistics. For the statistically minded, one of the worst repercussions of the shootout-overtime rules is the so-called loser point...

+1 for the rake-fight idea, -5 for the "no loser points" argument. Here's my take: the things that an NHL team needs to do well to qualify for the playoffs should be substantially similar, if not identical, to the things they need to do well to succeed in the playoffs. Shouldn't the 8 playoff teams in each conference be the eight who are most likely to win the Stanley Cup?

I regularly hear basketball and baseball invoked by people making this argument (when they lose in OT, they lose!), but the fact that they're still playing the same game to break the tie in extra time is a major, major difference. Maybe you noticed -- the rules for extra time in those sports are identical to the rules for regulation time! Kinda like playoff hockey!

Without the "loser point" last season, Detroit would have been seeded 4th and Anaheim 6th. Was there much doubt that these were the two best teams in the conference? Yes, it makes a mess of the standings and the idea of .500 being average, but right now the OT/SO results are only making a marginal difference regarding qualifying and seeding in the playoffs. Dropping the loser point would make a hash of the whole thing.

When they institute the Shootout in the Stanley Cup Playoffs, then by all means make regular season shootouts all-or-nothing. Until then, it makes only barely more sense to break ties in an all-or-nothing manner with the shootout than with Jean's rake-fight, or a puck control relay, or a one-lap race.


I don't see the problem with the disparity between divisions. If there are to be divisions, there might as well be some sort of incentive to win a division, Else, we should get rid of them altogether.

A possible compromise would go down from three divisions per conference, then down to two. There still might be disparities, but at least there would be far less likelihood that one of the division leaders won't make the playoffs by the basis of points alone. If the NHL moves to 32 teams, then there would be 8 teams/division, which would be a more fair schedule.

However, this whole discussion is laughable if one considers the make-up of the league in the 1980s. The Campbell Conference consisted of Edmonton and Calgary with three other sorry franchises in the Smythe, while the Norris was a complete joke for a decade. Meanwhile, a team in the Patrick Division had an immense fight in the playoffs between NYR, NYI, Philly and Washington, and the reward was to battle either Montreal or Boston in the semis. I don't remember anyone complaining about that lack of parity in the league.

The fact is, the Southeast Division champs have done fairly well in recent post-seasons, and if once in a while there is a bit of a weakness in the division, so be it.

If a team complains about not making the playoffs, then they should have done better against teams in their own division.


Would the rake fight be to the death? Or to the Pain?


5 Things I would do if I was commish for a day:

1) Change how points are awarded by giving 3 points for a regulation win, 2 points for an OT/SO win, 1 point for any extra-time loss, and 0 points for all regulation losses. Every game worth the same.

3) Contract to 28 teams. Things are diluted enough as it is. Dump Miami and Phoenix, or Nashville and Carolina, or whichever two teams make the most sense, right out of the f'n league.

5) In the name of integrity, declare the Pronger-to-Anaheim trade as "unbalanced" and force Brian Burke to hand over the rights of Ryan Getzlaf to the Edmonton Oilers as compensation. When he inevitably bitches about it, follow up by penalizing him the Oilers first round draft pick for this year for negative statements against the league office, and immediately award that pick back to the Oilers. When he complains further, immediately suspend Chris Pronger through the end of the 2009-2010 season.


Truth is, the secret agenda behind the all-or-nothing proposal is forcing the people who barely tolerate shootouts and the fence-sitters to take a stand.

I have a sneaking suspicion that the "loser point" made it easier for people who would have otherwise argued harder against the introduction of the shootout to just let things slide.

My faint hope is that someone will come up with something that maintains the competitive integrity that you mentioned but also restores the mathematical integrity.


There was a piece about the loser point in the NY Times. I thought this point by Skip Sauer was interesting.

In soccer, both teams are punished for a tie -- teams that tie share two points, whereas a winner gets three, and when the winner is determined is irrelevant -- thus inducing more aggressive offensive strategies. (I believe the move to introduce this originated in Europe; correct me if I am wrong.) In the NHL, both teams benefit from playing it safe late in a tight game, since there is one extra point awarded in games that go to overtime, and the loser retains the point from the tie that existed at the end of regulation. That's soft. I had not thought of this before, but it is yet another instance of Edward Gramlich's ironical observation that the socialist economies of Europe have more brutal and more capitalist systems of sport than the supposedly more laissez-faire America.


I have a sneaking suspicion that the "loser point" made it easier for people who would have otherwise argued harder against the introduction of the shootout to just let things slide.

My faint hope is that someone will come up with something that maintains the competitive integrity that you mentioned but also restores the mathematical integrity.


Suspicion confirmed; I'm one of those people. With the loser pt, I feel like the entertainment value of the shootout (and the fact that every team's fan base gets to celebrate about 6-7 more "wins") kind of counterweighs the competitive integrity issues.

Also, I don't have a real problem with the fact that .500 is meaningless. However, making all games 2 points would definitely nudge me off the fence into the NAY camp.