Looking for a favourite to come out of the West? 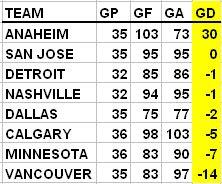 In anticipation of the playoffs, I was zipping through some data on how the eight (presumed!) Western Conference playoff team performed against each other only. The table at right is simply Goals For & Against in games played against the other 7 teams (shootout goals are excluded, but the totals include OT goals, EN goals, 5-on-3s, etc). The Goal Differential for the 8 teams adds up to 0, as you'd expect; I don't think you'd expect how it breaks down.


Ouch. I'm pretty much all-against Anaheim, all of the time, and for obvious Chris Pronger-related reasons. This only helps.

As an aside, any thoughts on which team Buffalo should want to play? I'd bet on Montreal being the best pick for an upset, despite the Leafs record against the Sabres this season (it's all about the goalies in the playofss).

Never did I think game 82 for the Oilers would be meaningful in such a fashion.


Good work, Matt, stealing a bit of my thunder.

Of course it all resets at playoffs, but it is noteworthy that Anaheim plays the playoff teams just about as well or better than the teams missing the playoffs.

Unlike, say, everyone else.


Can you do these numbers by quarter seasons? Is there any team that has jumped or tanked during the last quarter?


These are quarter-season numbers, effectively. I mean, you could go 20-21-20-21 or something like that, but I think the point holds, regardless of where the extra two games go.