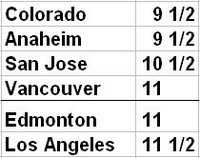 I'll be updating this more often over the course of the final weeks of the season (unless two teams drop well out of it promptly). Pending Calgary's remaining road games this week (Thursday @STL, Friday @CBJ, Sunday afternoon @DAL), I'm leaving them off of these little snapshots -- they're presently 8 games back of the Wings.

Obviously last night was not what I was hoping to see from the Flames, in terms of the result or the performance (notable exception: Kipper, who was fantastic). I might have jinxed Phaneuf last week; the winner was a SHG that popped over his stick at the blueline. Equally frustrating, though, was the tying goal on the PP. Hey, penalties happen, but Cale Hulse was sitting in the box for tripping Derek Boogaard (56GP, 2G, 146PIM).

That's a stupid penalty, chief. The only penalty Derek Boogaard should ever draw is Instigator, and that had better be when the game result is no longer in question. These are mistakes that a 10-year NHL veteran should not make (The Warrener isn't perfect, but it'll sure be nice to get him back in the lineup).

Also, I should say that while the commercial-free aspect of the PPV broadcasts is kind of fun, Jim Peplinski is probably the worst colour commentator in hockey. There was plenty of lowlights, but going on about how happy the Flames must be to have an experienced depth D-man like Hulse, during the aforementioned PP mere seconds before the goal, was probably the lowest.

Hearing him speak at a dinner, during dessert after a couple of beers, is fairly enjoyable -- he's got some excellent stories. Turns out, it doesn't translate to the booth. Don't quit your day job, Pepper!

Other frustrations: all minor compared to the above, except for Huselius fanning on a couple of setups from Iginla that were even sweeter than the winner on Sunday.

Bonus stat: the Flames' average attendance is 19,289, a.k.a. 100.0% of capacity. These sellout crowds, 34 in the regular season so far, witness less goal-scoring than any other crowd in the league. Go ahead and talk about what The League needs to do to market The Product, and it may make some difference at the margins, but I note again, there is absolutely no substitute for winning.