My earliest distinct memory of the Battle of Alberta was as a 12-year old kid unable to sleep with excitement because my team had just won the 1986 Smythe Division Championship in a Game 7. I remember lying in my bed absolutely vibrating with adrenaline. Yes, yes, it is true. Like Matt, I grew up in Calgary, and so during nightly street-hockey games I was either Lanny McDonald or Pepper as a scorer and Reggie Lemelin or Mike Vernon in net. The story of my adult awakening as an Oilers Fan is a tale as old as time, so I won't rehash it here.

My point is, maybe I've mellowed in my old age. I know I should be hoping that Kassian just steps on the Flames' throats and McDavid embarrasses the hell out of the D-Corp, but, I dunno. . . . if we are going to wait 31 years, we might as well hope for an entertaining series culminating in the kind of Game 7 that keeps a wide-eyed kid awake for hours.
Let's do this thing. 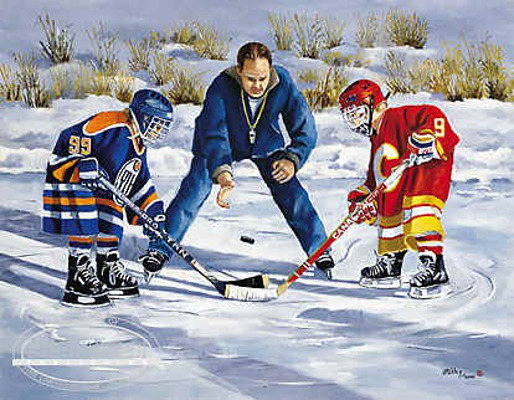 
Sacamano's Key to the Game:

What kind of whistles do the Refs bring to the game? Like all players whose primary strength is the kind of speed and skill that needs a bit of little daylight to execute, both McDavid and Gaudreau struggled a bit in their first playoffs as the refs pocketed their whistles and they lost a bit of time and space. McDavid, at least, seems to have figured this out and is now able to play within the structure of a more physical game. It remains to be seen if Johnny Hockey can do the same.


I think you should do away with the McDavid-Gudrho (or whatever his name is) false equivalency. One guy tied a single series record of a guy you have to Google to see if he’s still alive, and the other scored less points than 14 players in the first round. This is far to fair of treatment for the Johnny the imp of Calgary. I say burning effigies of him is the bare minimum of kindness. My partner is knitting one now just so I can ritually desecrate it.


I first started reading this blog as a 20 year old back in 2005, after lurking on HFBoards trying to get some insight into what the Oilers were going to do about their 3-headed goalie situation.

Little did I know how much the Oilogosphere and all these ridiculous posts would shape the way I watch, understand, and love the game. It's great to have you back.


Ha ha. Ahhh, yes, the HFBoards really were a gold mine of goodness.


Man its great to have you guys back. Anyone wake Grabia up yet?