There's a buzz on the street, 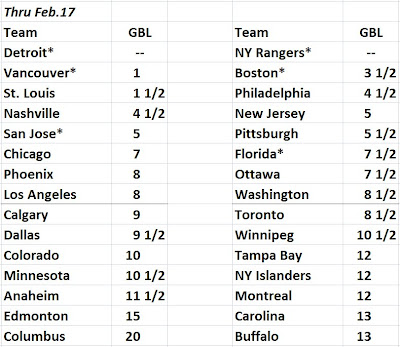 **The Flames are doing it with mirrors right now, or if you prefer, some shockingly wonderful results from a handful of guys in their mid-30s, but I'm not that pessimistic.

For one, teams really do get better and worse just kind of organically. We (and here I basically mean bloggers) tend to pretty arrogantly think that the relationship between the independent variables and the dependent variable is a tighter formula than it actually is.

Add known good players, have young guys predictably improve, get better and move up the standings; take the opposite actions, and observe the opposite results.

Reality, though, is that teams get better and worse, often times in mid-season, for reasons we don't understand. And I'm not talking about Wow, what happened to the Wild! situations, where the underlying numbers told the tale the whole time -- I'm talking about genuine improvements and drop-offs.

One of the teams currently battling for 7th & 8th positions in the West on merit could easily be one of the four best teams come playoff time. I don't like the chances of the February 1st Coyotes against the February 1st Red Wings in a 7-game series, but it could look different on April 15th.

But the second and more heartening thing is the schedule. Do you realize that after tonight, the Flames next 14 games are ten home games, plus road games vs PHX, ANA, MIN, and EDM? No Wings, no Preds, no Blackhawks, and no Canucks. If the lads can scrape through that with their heads above water (say 8-5-1), then suddenly it's March 20th and they're right in it. Which leads then to the third thing, which is Glencross, Moss, and Backlund back from injury -- and suddenly depth is a strength instead of a (glaring) weakness.

However it goes (obviously they could lose 5-0 tonight in LA and look like they deserved to lose 15-0), it's fun. The fight for a playoff spot is a lot more enjoyable than the most common alternative.