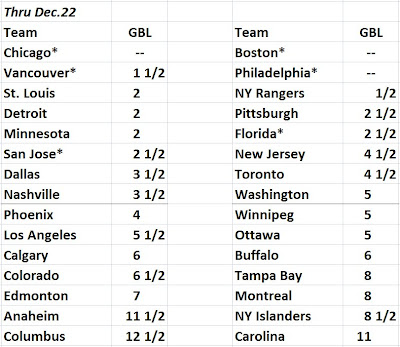 So having seen most of these teams a couple of times (on top of everything else we know, or think we know, about them), it looks a lot like there are five WC locks to make the playoffs: Canucks, Red Wings, Blackhawks, Blues, and Sharks.

I'm not about to put money down against the Preds, but they sure haven't looked like much against the Flames this season. Full respect to Daymond Langkow's Coyotes, and I think they have a fine chance, but it'll hardly be a smooth sail for them. And though I'm probably projecting the sins of last year's Stars on to this year's squad, it's still hard to love them much; a -7 differential, and -- c'mon -- 11 goals from Eric Nystrom.

On the Wild, I'm not sure I'd use Zona's inflammatory language, but they have not looked very good at all most times I've watched them. Part of that recently is them missing their best player (Koivu), but I didn't think much of them in their 3-0 win over the Flames last month either. Colorado, on the other hand, has actually looked not-too-bad, even though I've only watched them in losses to the Flames.

What it all adds up to is eight teams (I'll include the Oilers for karmic reasons) competing for three playoff spots. The Kings have the pedigree and the underlying numbers, so you probably have to like them for one of those spots, but really, the hockey gods could smile (or frown) on anyone.

A propos of nothing -- really -- I'm enjoying being a Flames fan this season. It's too bad we're likely going to miss the playoffs for the 3rd straight season, and I'm not a big Feaster booster, and GAAAH have those losses to the Canucks been painful, but yeah. I'm having fun.

I'm a bit older, and our family has more things going on in the evenings, so I miss more games these days, and I certainly don't live & die with the team quite like I used to. This helps, I think! But really:
Merry Christmas, and Go Flames.