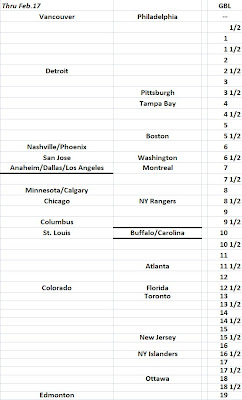 **The Flames' standing continues to improve by this measure, even though they still haven't made it back into the top 8 at any point. They're closer to 4th place today than they were to 8th place on January 24th.

The bad news, such as it is, is that the schedule gets tougher when the calendar flips. It's not that bad opponent-wise, but they play 8 road games in March, and six of them are in back-to-backs -- and the Flames haven't played back-to-back on the road since before Christmas.

Fortunately, if they start to struggle, they have an ace-in-the-hole: the general manager can just head into the dressing room and ask the players to crank up the effort and intensity!

**I don't have much comment on today's trades, except that I'm becoming less and less impressed with Brian Burke all the time. It's not so much that I think he made a lot of bad moves the past week or so (he might well have made more good than bad), just that it's increasingly clear that he does not have a real overarching plan that informs his decisions day in and day out. These days I see him kind of like a long-time gambler at the track; he knows things about horses and horse racing that a casual fan or less experienced enthusiast doesn't even know there are to know, but has accumulated superstitions from ten thousand wins and losses too. In the end that gambler has to follow his gut -- there's no way to process all the information sensibly, and the results could be worse -- but there's sure no explaining his method to an onlooker.

**I haven't loved Justin Bourne's stuff at Puck Daddy since he started, but man do I think he nailed "Why dealing players for picks is painful":

...if you ask me, when you're shivering in the cold, it makes a lot more sense to purchase a home with the foundation poured and the frame built than going out and buying a lot.

**I didn't get around to posting this until late, and tonight's out-of-town scoreboard was nice for a change! Minnesota and Anaheim are tied for 8th, 1/2 game up on the Flames. And the Hawks & BJs are T-11th, 1 game behind.

**As I recall the last Heritage Classic, Montreal won, and then the Alberta team's season went in the toilet. Let's not have history repeat itself, please. Go Flames. 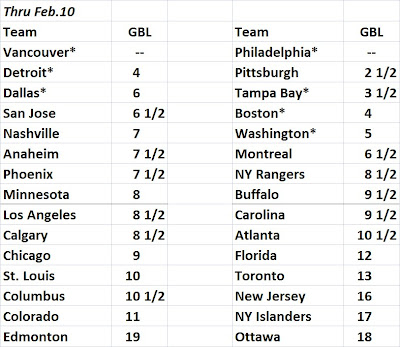 With a win tonight over the Ducks, the Flames would move into a playoff spot even factoring in games-in-hand. I wouldn't have guessed it, though I was sure cheering for it. And I remain pretty pessimistic (in the superstitious sense), for now... I was sure they were going to lose to Chicago on Monday -- sure. I was pretty sure they were going to lose to Ottawa on Wednesday, especially after they went down 2-1. And right now I'm thinking Jeez, you could sure lose a ton of ground with back-to-back losses here, couldn't you!

They already miss Tanguay, and my God do they miss Daymond Langkow this season, but if the hockey gods are willing, they're certainly good enough to get into the playoffs and have some fun.

**I wouldn't bet a nickel of my own money on Dallas making the playoffs. Steinberg and Kent talked yesterday about the possibility of the bounces turning vicious on the Stars, but it's already happening. They're 1-5-1 in their last 7 (the W was vs. the Oilers, in a game where they were outshot 35-21, by the Oilers), and their cushion is pretty much gone. They host the 11th-place Blackhawks tonight, who they only lead by 3 games. If they lose, that's down to 2.

I'm deeply disappointed and irritated that Taylor Hall looks like the real deal, and they have a lot of popcorn in the pot, but it can hardly be understated just how big a gap there is between where they are and where they hope to go.

**Haven't caught much Eastern Conference chatter lately -- are the Thrashers still in a slump, or are they just the same bad team that started the season 7-9-3 and then had one great month?

**Beating the Ducks would be the right result against the right opponent, and would be a hell of a relief before tomorrow evening's almost-certain L (I also wouldn't bet a nickel on holding off the Canucks PP again). Go Flames.

League at a Glance - All Star Break 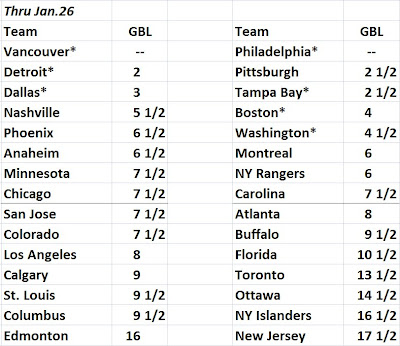 The Flames are this close to being right in the middle of the pack, with as good a chance as anyone for a 5-seed. But they aren't there.

**This Lowetide blurb from last week deserves a Word, or Amen:

The Memorial Cup, The CHL top prospects game and most of the Canadian NHL games are the only items Sportsnet has in their hockey arsenal at this point in time. Rogers must pay far less money, because the talent pool heavily favors tsn and whenever there's a raid it's SN talent headed to tsn not the other way around.

I'm okay with, don't care really. But I do wish Sportsnet at least tried to make their between period experts and their play by play men world class. The fact is that many of the American pbp guys are better than the current bunch who man the mics for RSN and that's a crying shame. No disrespect, these men worked hard to get where they are today and credit where due they made it. I do wish Rogers would at least respond to the challenge, though. Maybe upgrade here and there.

I'm not really OK with it. Yes, it pales next to the serious issues of the world, but the squads and the network want us watching 100+ hours a year of local team coverage, right? And not to put too fine a point on it, but the present on-air personnel makes me measurably less likely to do so.