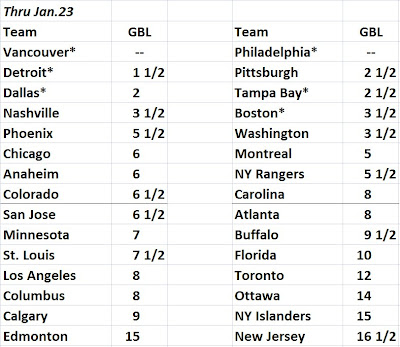 
I think the only reason to "hope for failure" is that it will act as an agent for change. Granted, the November/December dry-spell already rid of us of Sutter, so maybe that's all the org needs to stop repeating the same mistakes of the past couple of years.


As an Oilers fan, I can honestly say that watching a team through a tanking season is one of the most shameful things I have ever endured for my fandom. This year has been much better, as we do have some excellent rookies to make it worth part of the price of admission. But without those players this year, it would be enough for many to call it quits on supporting the team.

I can't even begin to think about how bad it would be to watch a team tank if I had a draft record like the flames do... Might have to start following basketball or curling or something.


"..the November/December dry-spell already rid of us of Sutter..."

That's it. There's NO chance that Feaster or Newguy gets hired on the strength of his plan to do exactly what Darryl did. "..stay the course, I like the direction we're headed...", yeahdon'tthinkso.

Is there anything that could happen to convince everyone that Darryl was right all along? I suppose conference finals or better, in which case, wooo! Fuckin' playoffs!!!!!


There is very little chance that the org still believes that they’re just a couple complementary pieces away from greatness.

What this had to do with tanking I dont know.

There is very little chance that the org is happy with their “age profile”, or looking at trading away what little youth they have.

Those advocating a tank job advocated trading youth? Doesn't seem to mesh. That the org isn't happy with it's aging profile? Ok, so trade some of those aging players away. It makes you worse. It helps you tank. That whole statement reads as an argument to tank it, not to not tank it.

The benefit to finishing 26th rather than 21st is pretty difficult to quantify, let alone get excited about.

There's the lottery, but on the surface it seems to be about a 4 space difference to me. If 30 drafts 1st and 1st drafts 30, then finishing 26th nets you a top 5 pick and finishing 21st doesnt. You can pretend that there isn't a big dropoff in NHL drafts if you wish, but Tank It advocates dont have to pretend along with you.

They need people to keep buying tickets. This is irrelevant if you’re a fan in Maryland or wherever, but there’s a segment of the fan base, including season ticket holders, whose support of a rebuild amounts to, “OK! See you when it’s done then!” If there’s no great evidence that in order to be great you must first be shitty – and there isn’t – then why put your fans through that?

That's what makes season ticket wait lists to wonderful. The club has a reserve of money if people want to be fair weather. Not really an issue with the Flames and their 5 year wait list for tickets.

There is very little evidence that this team can go from meh to great without a talent addition. Stajan is going to get better? The club also has no cap space. Barring miracle trades, it will continue to not have cap space. Free agency is therefore not an option. The choices left are therefore trade and free agency. Feasters record on trades is terrible. Drafting out of the top 5 is a crap shoot. The 'safest' way to add talent for this team was a top 5 pick.

It isn't an issue now though, as they would have to be truly terrible to get into the top 5 now and unless they call up the Heat that isnt happening. Out of all the reasons giving though as reasons to not tank, Karma was your best, IMO.