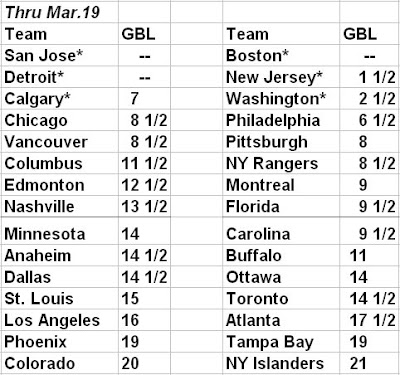 **It's happening -- the Oilers are on their way to qualifying for the playoffs. You still only get 2 points for an 8-1 Win, not 4 or 5, but it looks awfully promising for the the greasers. 4 of the next 5 on the road (two back-to-backs if you count tonight), then 6 straight at home before the finale in Calgary. Oil fans might want to hold back for the moment on purchasing that 10-pack of car flags -- the opposition over these final 12 is pretty strong, and/or gunning for the same spot as them -- but odds are.

**Know what I did earlier this week? Took the #8 bus. Regrettably, the chatter was somewhere between subdued and non-existent.

**Yes, I'm now in Edmonton. I've been living (and dining!) chez Sacamano, and it's been great. I like the city, with the obvious caveat that there are too many Oiler fans around for my liking.

**The Canucks have, unexpectedly, made this NW race look interesting. Barring a serious Flames slump, I think this 6-game roadie the Canucks are about to start will take care of the remaining drama, but the landscape has definitely changed. The Hawks don't look so tough any more; it's getting to the point where the BJs might be a tougher matchup. The Wild have been scathed by their March From Hell, but the worst is over and they're still in decent position: BIG GAMES against the Oil these next two Sundays. And even the Ducks' position looks suddenly favourable (in the context of squeezing in); two games each remain against the Oil, Avs, and Coyotes, which sounds to me like a Recipe For 8th. Maybe we'll finally get that Battle of California.

**Blues @ Flames, 7PM MT, RSN West. Calgary has played some nice games against St. Louise over the past couple of seasons, and even the mediocre ones have come up as Ws in the end. They're a good bet to outplay the Blues 5v5 tonight. But as Kent has been pointing out lately, the Flames PP/PK have been struggling, and both are relatively strong points for Blues.

By that time you have already missed the proper window (4:00-5:00) and are stuck with the unfortunate demographic who have, you know, jobs, families, shirts with sleeves . . .

Those suits don't know jack about the Oilers.


Barring a serious Flames slump, I think this 6-game roadie the Canucks are about to start will take care of the remaining drama, but the landscape has definitely changed.

I don't know. You have to go back pretty far to see a road trip that the Canucks really screwed things up. That would be of course November 29 to December 13th, going 2-3-1. Of course, Luongo was injured Nov 22nd, and that also was a period where 7-8 regulars were injured (including the back-up) and cycling through the line-up. It was actually during the home games from Dec 26th to Jan 31st that they crapped the bed. And they do have a winning away record. (I realize I should look up the stats for those dates to see if they were being outshot or out-goaltended.)

Besides, Van finishes with 4 of 6 at home, while Cal is the opposite. If Van tread water over the next 6...the pitter patter of their footsteps might still be there after.

And Calgary should be grateful, given that Vancouver's role this week has been to butter up Calgary visitors on B2B. Let me find a tip jar.


St. Lou played well for about 30 mins last night. Halfway through the 2nd, the wheels fell off and Van had there way with them.
Flames are gonna have to come up with a strong effort to win tonight, cause its the season on the line for the Blues.


Mirtle: Was it the Wild playing that bad, or is New Jersey just that good? I am not a Devils fan per se, but a New Jersey/Detroit Cup final has "allure" in that it would be a battle of the two premier franchises of the Bettman era of the NHL (post-1994 lockout).

Edmonton can basically bury Minnesota with a regulation time win on Sunday at XCel Energy Center (big if there, since I think the last time the Oilers did win there, Doug Weight was still with the team....this may or may not be a joke).

And don't look now, but by my count, Vancouver's only 3 points back of the Flames with a game in hand. We have a race in the Northwest, which did not seem possible even a couple weeks ago.