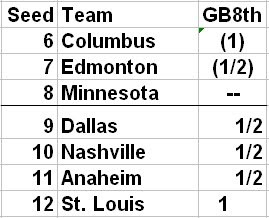 At left is the playoff bubble after this afternoon's games. Kings are out (13th, 2.5 back) -- losing 3 straight (and 5 of 6) when you're already on the unhappy side of the line is just a killer. Let the picking over of LA's roster begin!

As of right now there are four NW teams in the top 8, three Central teams, and just the Sharks from the Pacific. This is probably untenable; pretty soon the interconference play, and even most of the interdivision play, will be over.

Whatever; big, big ups to the Predators and the Blues for staying alive.

**Daymond Langkow's brokenERRRR, "bruised" hand will apparently cause him to miss the Flames' 7-game roadie that starts Tuesday. Bad news that it's that serious; good news that they're not jacking around with the healing process. In related news, I'll be shocked if they do better than 3-3-1 on that trip.

**With their loss to the Pens this afternoon, the Stars have managed to lose 5 straight games -- all at home. I think the solution is to dismiss Sean Avery from the team; that dude is a cancer.

**And yes: in case you missed it (like I did) or didn't hear about it elsewhere, Dellow and I got a shout-out from Ron Maclean last night in the 1st intermission of MIN-EDM. Thanks for the kind words, Ron.

You can see the video by going here; then under 'Choose A Category' towards the right, click on 'Hockey Night in Canada', then 'Coast to Coast'. The clip in question is marked Coast to Coast: Feb 28.

Maclean had a discussion with Hrudey and Milbury about Tyler's post wondering why Pisani and Moreau got so much TOI late in the loss to the BJs (particularly the final 6-on-5) while Penner and Cogliano were welded to the bench. It was a bit dissatisfying (the discussion, that is), so I hope to have a chance to post on it in a bit more depth. "I'm so appreciative of good wishes from Ron MacLean that now I'm going to tell him how to do his job" -- that kind of thing.

**Calgary 4 (Moss, Lombardi, Aucoin, and Iginla with the SO winner), Tampa Bay 3 (whatever). Go Flames.

On your next job hunt, make sure to include Ron Maclean as a character reference.


Surreal to see both you guys mentioned on CBC. Congrats to both you and Tyler. You guys deserve the attention, naturally.

Props to Ron for the mention as well.