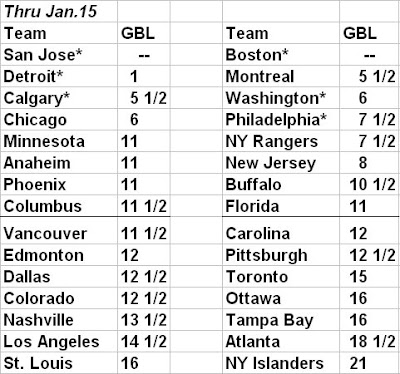 **Very Bad Week Dept. ("Sorry for the Jinx" Division): Vancouver, Los Angeles. When I took a long look at the WC playoff bubble last Friday, I didn't even include Vancouver. Since then they've managed to lose 4 consecutive (home!) games, and now they're on the wrong end of the 8th place tiebreaker. It's hard to get an exact bead on them... I think it's fair to say that while they're clearly a tier below the Hawks & Flames, with a sound Luongo they should qualify for the playoffs without must-wins in Games 81 & 82. Forget the caught-in-the-moment fears about chemistry, and whether Sundin can still play: he can. He'll make a positive difference for them going forward.

As for LA, I still think they're good enough to hang close-ish: I really, really doubt they fall into Tavares territory. But OTOH, the one massive factor I somehow overlooked in last week's post is their sked from here on. Somehow, with 39 games left, they have 12 home games and 27 road games. Absurd -- I've never heard of such a heavily weighted H/R schedule in any sport.

Also: Pittsburgh!?! I knew that they were on the wrong side of the playoff bubble, but jeez -- they're losing touch with the middle of the pack. 4-1/2 games out of 6th? How did this happen?

**Follow up to yesterday, you really, really, really have to check this out: Adjusted EV Career Plus/Minus, 1968-2008. Adjustments made for team quality etc., and 'overpass' does a terrific job at laying out how he went about it, and the limitations that remain.

There are some nice hockey players who are a bit forgotten on account of never winning a Stanley while wearing a letter. But if there's one thing to take away from it: Mark Howe needs to be in the HHOF, like, yesterday.

**I'll ask out loud: are we really waiting for David Moss to bank his 25-goal season and inch up close to July 1 before signing him to another contract? Surely now is the time to get him under wraps if there's to be reasonable hope that he outperforms his next contract as massively as he's outperforming this one. (Last night -- road game vs. the best team in the league, in case you forgot -- he and GlenX outshot the Sharks at evens 15-3. 24-3 if you count attempts missed and blocked. In barely 8 minutes of EV ice time.) His upside would be far higher if he was 21, but there's nothing in the underlying numbers right now that would suggest that he's simply on a hot streak, or riding in the sidecar of superior linemates. And to my eye (and I'm not sure how anyone could see it differently), he is G-D hard on the puck.

**And finally, two interesting links to tide you over until Lowetide is on prospect watch full-time:
Go Flames.