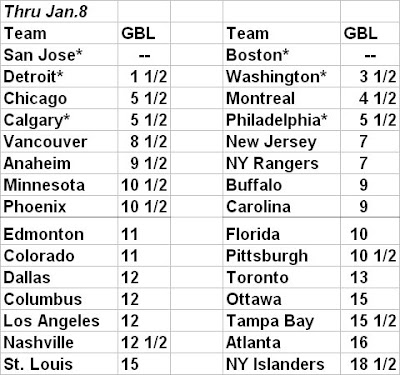 **As usual, what's interesting about the Standings at this point in the season is the gaps & clumps. The Hawks and Flames have almost assured themselves of playoff spots (this site's math says they are at 98% and 96%). I browsed through the archives a bit, and the biggest fall from ~ this time of year -- in terms of being solidly in a spot and eventually missing -- was the Canucks and Kings in Jan'06, who were 4 and 3.5 games ahead of 9th. (There are bigger falls, like the Blues and Isles last year, but those were teams around the bubble who fell down the elevator shaft.)

And attention Leafs fans: all hope is not lost, although hoping for Tavares works too. In 05/06, the Islanders were 4 games out at about this point, and made it into the playoffs. I forget who they edged out...

A mere 2 games separating 7th from 14th in the WC is also pretty interesting. It's incredibly hard -- impossible, really -- to mentally assemble all the various factors that might contribute to any one of those teams getting ahead of the pack or falling out of it. So I thought I would put together a very rudimentary, not-rigourous look at what the Statzis call "arrows".

My premises here, which of course you are free to reject but have some decent (though varying) basis within the hockeysphere the past couple years, are as follows:
Also note: the table header is slightly wrong, as the PP/PK shot numbers are for the whole season. The EV shot info and percentages (1st 6 columns) are for the past two months.

I have pinked the leaders in each category and blued the trailers. The difference to note here is that being the best in the 'percentage' categories (cols 4/5/6) is not a up arrow, it's probably a down arrow if anything. An extreme example: Say the Blue Jays and the Yankees are tied for 1st in the AL East on May 15 (with the Red Sox being well back). If the Jays have a lot of guys hitting the ball well, that's obviously a good thing and a positive arrow. But if they have 3 guys hitting .400, that's not a sign that they're poised to pull away from the Yankees; it's a sign that they're likely to fall back, because that level of success simply is not going to continue.

Anyway, the percentage columns are just there for illustration. What I've done next is just a really simple grading of those 9 teams in 3 categories: EV shot differential, PP shot creation, and PK shot prevention. +1 if the team is clearly above average, 0 if it's ~ neutral, and -1 if they're clearly below average. A couple random bonus points thrown in if a team is especially good or egregiously bad. Then doubled the value of the EV grade (so that its weight is equal to total special teams), and added them up. 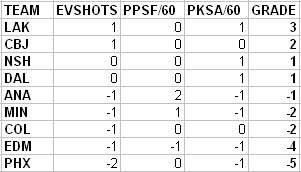 So fr'instance, the Kings have been a good outshooting team at evens, ~average at PP shot creation, and outstanding at preventing shots on the PK. (Sidebar: they may well be pretty shot-happy at the offensive end -- taking lots of low percentage shots by design, which torques their outshooting numbers -- but their shot prevention is the real freakin' deal. 2nd fewest SA/60 5v5 and 3rd fewest at 4v5.)

Before we get into parsing the table at left too carefully, what are the factors that aren't reflected here?
So, predictions: it sure looks like the Oilers and Coyotes will need to ride some great percentages to get in. Both have some young players who should be expected to keep getting better, but the underlying numbers are still pretty far out.

The Avs are average or slightly below average across the board. Note that they have *not* -- to date -- been done in by bad goaltending. Getting Paul Stastny (among others) back from injury would help a lot, and they need Budaj and Raycroft to keep it together. The Wild, it would appear, have no hope of sustaining the goaltending performance they've had so far. They are 24th in the NHL in PKSA/60, but have the #1 PK because their PKSV% is 0.932. Backstrom's a nice goalie, but that's no more sustainable than batting .400.

Dallas is the flip side of that coin -- 2nd best in PKSA/60 -- but have the #27 PK at 76.9% because of an .800 PKSV%. Marty Turco's recovery (or replacement) will ease a lot of that pain. That said, the Stars are no hell in any of the other categories, and will likely need the goaltending improvement at EV just to compensate for a drop in Shoot%.

Barry Trotz is a good coach, I think. A little more finish or luck at the offensive end going forward and the Preds are absolutely still in this thing. Maybe Steve Sullivan's return will be the ticket (or maybe, for want of a Radulov, a playoff spot will be lost). I've mumbled on about the BJs a few times this season, but their team health is just a disaster right now. What a kick in the balls for their ownership (and fans); they finally put together a squad that has a good shot at a playoff spot (maybe even a good seed), and the hockey gods send some lightning bolts down at various lower body parts and undisclosed areas. Damn you gods! Hasn't this franchise been punished for Doug MacLean enough!

And, the Kings. I have no idea. There are basically no subjective reasons to like them for a playoff spot. Too many young and Gauthier defensemen. No experience (or proven NHL talent) in goal. The absolute worst 4th line I've seen this season. Suspicions that they're tanking for Tavares. And yet, they're in the thick at the halfway point. The reasons to believe come down to:
Especially given that the Ducks have a head start, I think they make it. I don't think that what the Wild and Coyotes have achieved so far has enough sustain, so I think they're out. Same with the Oilers -- there's just not much there to look at and say, "Well that will surely improve in the 2nd half." (Not to mention that their best player is out indefinitely with a concussion.)

Which leaves the Stars, BJs, Kings, Avs, and Preds for the last two spots. It'd be awfully gutless for me to turn around now and not pick the Kings, so... the Kings! I'd take the Jackets too, but this injury business has me spooked, so I'll take the Preds instead. Short version is, I doubt their recent scoring struggles are as intractable as they appear.

[Letterman Disclaimer: This is for entertainment purposes only. Please, no wagering.]


You're back on form, good to see.

And this is off topic, but it truly fits with the tone of your article as well: Have you ever heard of a guy named Jim Albert? This cat is off the hook.

I've mined through the baseball sabrmetrics rubble before, and walked away shaking my head. Then just when you think it's nothing but clay, you hit a vein of gold. I was up until 4:30 last night reading this guy's stuff. Unbelievable.

It's like you or Tyler, but better math and more kindly relentless. His Todd Zeile streakiness thing is so similar to MC's Horcoff/Cole scoring streakiness analogy (rolling averages) that I suspect Tyler was copying, it would have been nice to know earlier.

There is so much shit there that is just downright inspired, I don't know where to start. And he also understands the gaming industry in a way that he shouldn't, his slang is British though. Odd that. Nobody should be able to come up with this shit on their own, so I suspect he didn't. Maybe out for a liver and Guinness breakfast in the East End and he pops into William Hill to throw a few bob on The National ... and some fucker tells him the shorthand version of how it works as he leans on the counter. And he understands.

And where he goes from there is amazing. Not so much "he's outside the box" as "he's right in the middle of the box, where the hell did everyone else go?".

You have to read this stuff, Matt. Seriously.


Very nice post. Even if its not so complimentary to the home team..


Great post. There is something interesting about the Kings, that may explain some of their success so far: the schedule.

If they keep the same pace at home and on the road, they will get 19 more points on the road, and 16 at home. That's only 35, and a season total of 75. That's not very scientific, but it just shows that a playoff spot is far from granted for the Kings.

Keep up the good work. I love those baseball standings posts!


Man, I didn't realize the H/R split so far was so massive. That was a, err, substantial oversight. Good thing I have my bets hedged with the Blue Jackets...