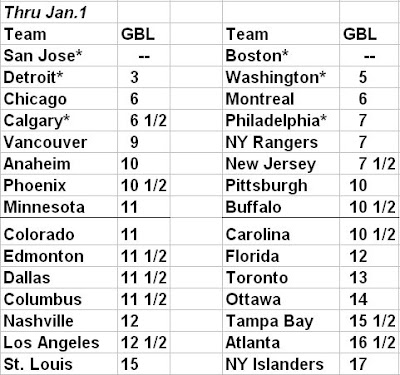 As it happens, San Jose and Boston are tied by this measure today (both 24 games over .500), so it's a good time to compare the two conferences.

The most interesting thing to me is that the West has a huge playoff bubble -- look at the number of teams close to the 'cut line' -- and the East hardly has one at all. There are already 3 (4? 5?) teams out of playoff contention in the East, while only St. Louis is effectively toast in the West.

So in terms of making the playoffs and winning a series, it's not a lost season yet for hardly anyone. There are 12 WC teams that could quite conceivably finish 6th.

The flip-side: in terms of going on a long run, and having a chance at a WC pennant and a Stanley Cup, it might be a lost season for just about everybody. San Jose is just not slowing down much, and if my goals involve beating Detroit, I'm looking at next season, not this one. Add in the Hawks, who are already really good, have a strong chance to improve internally, and will be able to use Khabibulin's money on skaters once they get over themselves and trade the guy.

Where the Flames fit into all this is a post for another day, I suppose. I'm thrilled that their record is as good as it is so far, regardless of the fact that it has been a bit home-heavy (they still have a couple of those mean road trips that the Canucks and Oilers already dusted off). I'm also thrilled that (notwithstanding the schedule) their record is legit: no unsustainable percentages, massive OT/SO success, etc. There are still numerous ways in which they could get better.

But, looking at the top end of the Standings is a splash of cold water to the face. In the nine games before the All-Star break, the Flames play the Sharks twice (one here one there) and in Chicago once. By the ASG we should have a better idea as to whether they are pretenders, or what.

If Iggy can get back to himself and Kipper keeps looking like he has (and Bertuzzi continues to not suck quite as horribly as he did before), I'm really quite optimistic.


Only 3 1/2 games behind Detroit is pretty honorable. I think it's still quite open in both conferences. With a good second half, and one or two smart moves before the trade deadline, almost any team can enter the playoffs on a roll.