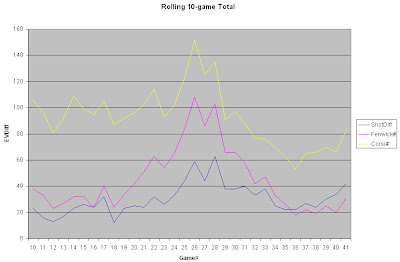 It's probably a bad idea to squint too hard at any of the peaks and valleys, because so much of the movement owes to Home/Road splits and strength of opponents. I put it together to see if there were any really broad trends (or what have you) that could be spotted. I'd say there's one, and it's that everything's positive (mathematically speaking).

There are probably ten teams in the league who wouldn't show up on this chart at all because my Y-axis doesn't go below zero, and another ten whose lines would drop off the bottom at times.


Rounding out the on-ice package, one can't say enough about the stellar play of goaltender Miikka Kiprusoff. Not only has he overcome his traditional slow start, but he seems to have relieved himself of carrying a cauldron of hate for head coach Mike Keenan.

That's just a tidbit from Jim Kelley's latest opus. Someone actually pays him money for this stuff.


I made the same comment at 5HF yesterday, but, I almost don't know what to say about takes like that. Kelley is not alone; both Kerr and Molberg on the FAN say that Kipper is the MVP so far this season.

Whatever. The silver lining is, I'm no longer terrified at the prospect of a Kipper injury.


It shows what shoring up the depth can do. Granted much of that has come from Boyd and Moss making giant forward strides (I've seen Boyd terrific btw, your boy Moss not so much, but the numbers are clearly there for both). And Bourque and Glencross certainly aren't world beaters, but as expected they've both covered the bet of their salary, and by a wide margin.

And Giordano has been a vast improvement over Eriksson by the numbers and by the commentary of Kent and yourself. Eriksson had gaudy counting numbers in CBJ two years ago based on being sheltered and a great PDO number. I was hoping that Sutter would keep betting on the same type of horse.

I think that's what's painful about being an Oilers fan. They are a pocketful of change from being in the second tier in the tough Western Conference. Thoresen, Dvorak, Reasoner, Torres, hell a healthy Pisani, and this team is right there. The Oilogosphere always loved the guys who oved the puck the right way, btw, long before I got here. Probably a lot of the appeal of the place at the time.

Of course that impact wouldn't be felt unless they are taking ice time from Nilsson, Brodziak, Gagner, Cogliano and Pouliot. You have to believe in the future and take the rough with the smooth, I suppose.


It shows what shoring up the depth can do.

That's basically the moral of this Flames season (I guarantee you that'll be my cowbell for years now).

Add Bourque and Glencross. Moss healthy. Delete Godard. And, Poof! Boyd & Lombardi are playing with better players (and are a year older), and the whole shmiel starts to function better.

Also, Langkow has been awesome. As you know Vic (and Earl, among others), making Bertuzzi look like a 5v5 difference maker is no small feat.


BTW: I love rolling averages. As I'm sure you know, they are en vogue with business assessment as well. And for good reason in my opinion.

Tyler essentially gave us rolling averages when he looked at the streakiness of Horcoff, Cole, Hemsky and Gagner a while ago in a post called Atom Balls. His mind works in such a way that we're subjected to tables instead of charts, but none of us are in a place to bitch about it. It's the same thing either way, though the interpretation gets affected.

If you compensated for opp quality with your averages (hell even if you didn't), and ran the average line down the middle ... the coloured the areas between the average and the average line would be the BLACK statistic (you can google for baseball, or use timeonice.com/blackstat.php if you have access to Tyler-style goal scoring streakiness data.)


I think that's what's painful about being an Oilers fan.

I won't lie, I'm basically revelling (once again) in the Oil's struggles (the Lowetide comment threads are *so* much more fun to read in the bad times!). But I do feel shitty for Hemsky w.r.t. his injury. It looked like he was emerging as a serious, top-tier, all-around player this year.

Assuming the health issues aren't persistent, I wouldn't be surprised at all if he's a better player than Iginla next season -- counting numbers, underlying numbers, the works.


Yeah, Hemsky is the real deal, so is Horcoff, so is Visnovsky.

And I can see them burning points on Gagner and Cogliano, Christ they're just boys. Where were Boyd and Moss at that age? ... without looking it up, I'll bravely guess 'nowhere freaking close'.

It's the ice time being burnt on Nilsson, Brodziak, Grebeshkov, Pouliot and others that chaps my ass. I mean it's not like any of them are likely to become world beaters, and just how much do you gain by fast-tracking this kind of guy? I dunno, but my guess is 'not much'.

I mean coaches play to win if you let them, but that's not the case here. Plus I like MacTavish, his wandering thoughts last spring on the split-second decisions of players on the ice revealing their character. Damn, there's more truth in that than any of us should think about.

For that matter there's more truth about humanity in a game of hockey than almost anywhere. Yet baseball gets all the great poets, go figure. Maybe because there is a lot of unpleasantness in the nature of people, and you see that in hockey without trying, but not so much in baseball. I dunno.


Can you two just keep talking to each other like this, please? I have a giant chubby right now.