With Chicago's win over Nashville last night, every team in the league has now played 40 games. Here is the traditional 2nd 20/1st 40 look at results. Note that Goal Diff includes shootout goals, empty-netters, everything: it's straight off the Standings page. 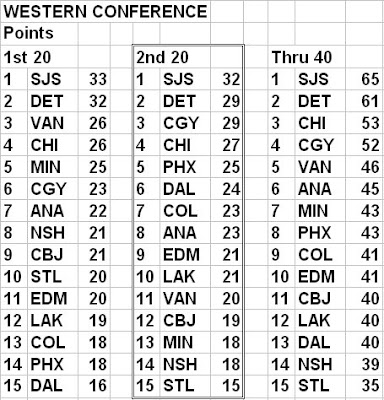 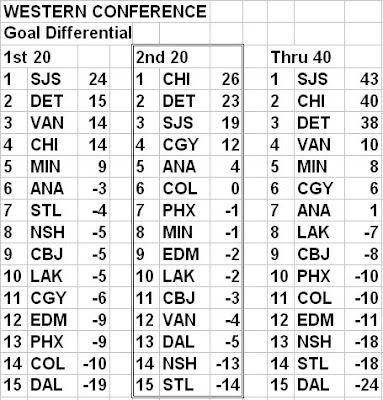 The Hawks had a handful of blowout victories that really goosed their GD (13-1 combined in 2 games vs. the Coyotes, plus that 9-2 beauty over the Oil). The flip side of that is that PHX would look as good in the GD column as in the Standings column if they had lost those two games by more reasonable scores. Again, we see that the playoff bubble sports a whole lot of teams that are very tightly bunched. 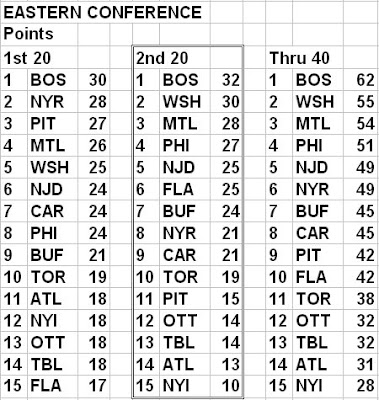 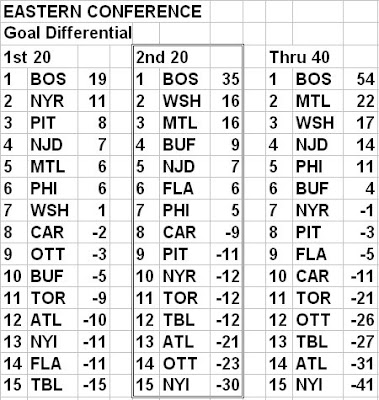 So basically, the four worst teams in the NHL -- by record and goal differential -- are in the Eastern Conference. If you're trying to compare the playoff teams from the East and West, this has got to be a huge factor.

JLikens takes a very interesting look at the Bruins and their percentages (concluding ~ 'even if they have better finish and goaltending than anyone else in the league, this can't last'). Here's another thing to look at. Records vs. the Flaccid Four:
I kind of cringe to post stuff like this, because no matter what neutral or complimentary wording you use, it sounds like you're saying, "Horseshoes!!! They don't deserve it!!!" And that's not the case. Beating lousy teams is better than losing to them. Getting great goaltending and a high SV% is better than not. Shooting at a high percentage is better than not.

In the very specific context of, "Can the Bruins sustain this level of success?", or, "Do they project to be a scary dominant playoff team?", the answer would seem to be No. That said, the fact that the Bruins have been outshot on the year has surely been influenced by the Score Effect (see the comments). Roughly, the shots battle will tend towards the trailing team, while the percentages (SV and Shot) will tend toward the leading team, for reasons that seem fairly straightforward: the trailing team sends more low percentage shots at the net because they need something to happen, while the leading team is more satisfied just to dump it in and change, plus the odd-man rushes etc. that you get counterattacking because the opp is cheating to score.

And lo and behold: while the percentages remain absurd, the Bruins do in fact outshoot the other guys when the score is tied. So they got that going for them, which is nice. For them.

Wonder why that could be...


The addition of Sundin?

Wonder why that could be...

No good reason. They played the Oilers four times in three weeks, FFS.