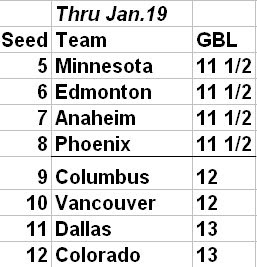 I'm quite certain that I haven't looked forward to a non-Flames regular season game as much as this one in ages.

For one, as noted numerous times in this space, the BJs are an intriguing and (IMO) good team.

Second, it's an interesting star matchup. Rick Nash and Ales Hemsky have shown spectacular offensive ability for quite a while now, but they've spent the last ~ calendar year establishing themselves as two of the best all-around forwards in the league. They take their shifts against the best players on the other team, and more often than not, they come out ahead.

It won't be reflected in the counting numbers this season, and believe me I'm not happy to say it, but it sure as hell looks like this season is seeing a changing of the guard. A year ago, there could be no debate about who the best RW in Alberta was. Today, there could be. And by this time next season, I suspect the debate will be settled, and the answer will not be the guy wearing the Flaming C.

Third and finally, there's the drama. The esteemed publisher of Lowetide has finally announced that he's sick of the bubble life (without looking it up, I believe that with the exception of spring & fall '07, the entirety of the Lowe/MacT era has been spent within a few points of 8th place one way or the other). If the Oilers aren't in 8th spot or better at the All-Star break (no ties), he's going to blog about less frustrating things going forward.

A win tonight and the Oil secures that spot. A loss, and they'll need some help.

Can't say that Iggy has given you much reason to doubt this conclusion this year though.

Still, I hope you're wrong.


It's nice see some support for the Jackets on the north side of the border! The Jackets have been playing almost every game as if it's a playoff game since the new year. In the words of Hitch "this team is dug in".


Still, I hope you're wrong.

I can't imagine being happier about getting something wrong anywhere ever.


I can't imagine being happier about getting something wrong anywhere ever.

And vice versa for me. By the way, how is it an Flames/Oilers blog that at one point had no less than four Oilers contributors on the masthead needs the resident Flamer to supply Oil-related content? And don't even bother mentioning that my Oiler-related blog has four writers on board, none of which who have so much farted in the Oil drops general direction in almost a month because that's totally different.


That depends, I guess. Yeah, Iginla's getting older, but it's not like he hasn't had a Jarmoe year before and come back the next year and been annoyingly awesome.

That being said, I like your vision of the future. Let's hope that Hemmer doesn't get his bell rung again before it can come to fruition.


I definitely should have put a disclaimer in there like "pending Hemsky staying healthy".

Or to use Terry Jones' phrasing, "If he can show up for work more often."


And by this time next season, I suspect the debate will be settled, and the answer will not be the guy wearing the Flaming C.

Or after tonight, for that matter.


Or after tonight, for that matter.

Iginla's had 4 and 5 point nights this season too... don't get ahead of yourself.


I'll put Hemsky ahead of Iginla only when the nightmares about Iginla stop (the phrase "sweet embrace of death" comes to mind). That said, Hemmer couldn't possibly have put together a more comprehensive answer to this post. That was a Larry Fitzgerald-esque show.


Ok, for a guy who's watched a ton of hockey since 1990, I'm having trouble remembering a performance by an Oiler forward to top what Hemsky did last night since the legendary Messier game 4 show against the Hawks in 1990.


That said, Hemmer couldn't possibly have put together a more comprehensive answer to this post. That was a Larry Fitzgerald-esque show.

Yep [shudder]. The description "4-point night" does no justice to it whatsoever.