We are past the all-important 29-game mark of the season; here's some delightful timeonice.com data for the Flames forwards to date.

Click to enlarge of course; there's some interesting stuff in there. The data for all but the last two columns are at this link. Jersey numbers are here. All numbers are for even-strength play when Player X is on the ice, 5v5 and 4v4 only (6v5, even though technically even-strength, is excluded).

The second last column refers to where the forwards are starting their even strength shifts (link here). Let's blow that up, shall we: 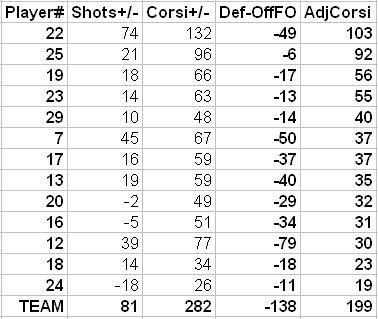 Because the Flames take about five more O-zone draws per game than D-zone draws, everybody is a minus, but you can still see the differences in how they are used. Mike Keenan -- to my eye and by these numbers -- is slightly indifferent about who goes out for D-zone draws, but tries very hard to get his skill players out for offensive zone draws. Which is why RW Jarome Iginla has been out for 79 more of those than the D-zone kind, whereas RW David Moss has been out for only 6 more of them than the D-zone kind.

The last column: once upon a time, I recall Vic noting that on average across the league, an offensive zone draw translates into ~ a net +0.6 attempted shots. (And the reverse for D-zone draws of course). I can't vouch for this calculation -- I can't even be certain I remember the figure correctly -- but it passes the sniff test. Lose the draw, usually get 0 shots, win it, usually get 1. And occasionally get 2, 3, 4.

All that last column is is, the Corsi +/- modified to account for that: 0.6 deducted for every 'extra' offensive zone draw.

QDC #1: The 4th line (#19 Primeau, #23 Nystrom, and #29 Prust) has been doing a nice job keeping it in the right end of the ice. I think that's all you can ask of a 4th line, really: sometimes they get stuck out against Thornton or the Sedins, so a minus in the +/- column on the stats page is expected.

QDC #2: Especially when you factor in how little success Iginla and Bertuzzi have had as a duo, it makes ten kinds of sense to play Bert with #22 Langkow and #25 Moss. Guys who keep the puck in the far end of the ice really well? Why yes, they do sound like a fantastic damn idea as Bertuzzi linemates!

QDC #3: While I haven't looked into the splits with and w/o Bertuzzi, Kent and anyone else paying close attention were correct about Iginla struggling early on at EV. He's the guy who should be popping out at the top of this table, well clear of the pack, not Langkow and Moss.

QDC #4: Let's get David Moss a new contract, shall we?

In about 4 minutes, it's Panthers @ Flames (RSN West). The Flames should win in a walk, but as we saw in the last two Oilers games, sometimes the hockey gods are not kind to the better team on a given night.


Hey, when did Matt start writing Flames posts too? :P