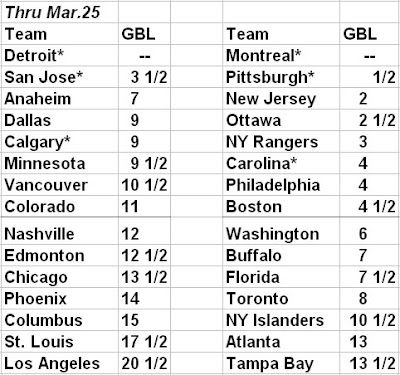 **I'm going to be away from the PC on Friday (and really, mere weekly updates are a bit inadequate at this stage of the game), so here's the state of the union this morning. By the way, Vic Ferrari -- whose work I hope to get to in more detail next week, perhaps -- has set up yet another useful link: baseball standings updated in real time, or as close as you're going to get.

**Yes, it's true: I went (with Mrs. Matt) to my first-ever Oilers game at Rexall Place on Monday, and it was the first time I had been in the building since the 1984 Canada Cup. Host David Staples (thank you very much again, David) gives a substantially accurate account of the evening; my only quibble would be that while Yes, the Oilers gave the Wild's goal light a workout early and often, I'm quite certain I was done my first beer well before they were up 3-0.

I approached the game with calculated indifference towards the outcome. If the Wild lost, that would be good for the Flames, but on the other hand, if the Oilers lost, then the Oilers lost, which has its own psychic rewards. (We described what we were cheering for as "good sportsmanship and no injuries".)

As it turns out, I couldn't get excited at all about the Oil taking complete control from the get-go, and when the Wild scored their 3rd goal to get to within 2, I surprised myself with a barely detectable but unmistakeable fist-pump. It would appear that my favourite NHL teams are ranked something like this:

**On the subject of The Building... this is Andy's wheelhouse, and my contribution to the discussion has been limited to the contention that it is morally reprehensible to take money from Joe Taxpayer (hockey fan and non-fan alike) and use it primarily for the benefit of an incredibly popular private business -- one where its customers are already stepping over each other to hand it money voluntarily.

There's another angle that Andy hasn't addressed directly in too much depth, but that Colby Cosh has been hammering for over a year. From his site last night:

I'm not too clear after reading the summary just what is wrong with the existing Rexall Place. I was looking forward to some clear public explanation of this, but all we've been given is a lot of wind about "downtown revitalization."

If there's one thing I took away from my visit, that's it. I have little doubt that a brand-new building would be "better" in all sorts of ways: a whole lot of design ideas have been road-tested in the past 35 years, and surely a new facility really would be a special landmark shrine gathering place. But jeez -- Rexall Place is pretty nice inside! Good place to watch a hockey game!

As part of my present vocation (~electrical engineer for buildings), I've been in a lot of places that are obvious or 'bubble' candidates for either replacement or complete (gut-job) renovation. They share one or more of a common set of problems: undersized utility services; uniformly failing/expiring finishes (i.e. the "crumbling"); failing building structure; obvious & intractable inadequacy for its current (or desired) use. At a glance, Rexall Place exhibits none of these problems. Sure, having to wait a few minutes to get to a urinal at intermission is a pain, but this isn't easily mitigated with a new building. And the cost-benefit analysis is an open question: personally, I don't think reducing pisser time by 2 minutes during peak demand is worth a penny over $150 million in public/private funds. $450M = too much!

At the very least, if one were to explore "inadequacy" as a tenuous replacement basis, you'd want to see at least some evidence that people have stopped going there. 45 sold-out Oilers games a year, and being the 12th-busiest concert venue in the world, is not it: it's evidence to the contrary, like it or not.

**Jean Lefebvre has put together the best-case/worst-case standings, from the Flames' perspective, based on how the NW-on-NW games could go tonight and Friday. My reaction to the worst-case was, "Hey, that's not that bad!" That's good. Go Flames.


Good stuff Matt. Hope you and the wife enjoyed the game.

As for the "what is wrong with Rexall" explanation? Well more than a few people have been looking for that (aside from most of the MSM). And, to be fair I think Andy has been banging that drum alongside Mr Cosh for quite sometime.

Good stuff on Cosh's site as usual today for those who haven't had a peek.


Apparantly - one of the reasons they've come up with for replacement is that they don't want to be left out of the "major concert" schedule like Calgary has. The reasoning has to do with the structural strength of the building and roof supports being able to accomodate the ever increasing load these elaborate concert shows bring with them. Turns out, we were only a few thousand pounds of capacity from not having a Justin Timberlake concert.........