Here is this year's edition of Sacamano's Western Conference Playoff Predictor. I'm sure there are better ones out there, but I had it ready, so I might as well post it.

As in the past, just enter in your predictions for the remaining games, and it will spit out the final standings. Alas, I'm not still not web-savvy enough to make it an online interactive deal, so you will have to download and/or open it on your own computer. If anyone out there wants to put it up in web format (if such a thing is even possible), you are more than welcome to do so.

As in previous years, I've still been too lazy to figure out an array formula that will take into account the divisional leaders, tie-breakers, etc., in the rankings. So, use your noggin to switch that up.

I've put in my best guesses for the remainder of the season. As MF likes to say, your mileage may vary. 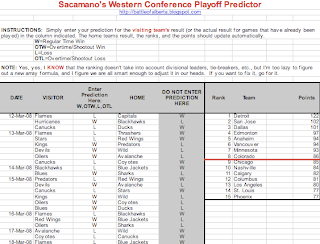 
I had a vison today, and Here it is.


The Oilers make a great run only to fall 1 point of 8th and finish 9th, every one is sad as the season is over and the playoff seeds are announced.......but then out of nowhere Oilers call a press conference to announce that they have discovered (with the help of the TV show W-5)that the ducks are actually over the cap by $2.09 thus making them ineligible to participate in the postseason, bumping the 9th place oil into the 8th seed. brian burke's head explodes soon there after.And we all live happily ever after.


Last night I had a dream that Penner scores 3 goals tonight.

But I also had a dream that I went to a Stampeders game for some reason...


But I also had a dream that I went to a Stampeders game for some reason...

Perhaps was it due to you dating one of their converted exotic dancers that are otherwise known as the "Outriders Cheer Team"?

If so, that would be considered an acceptable excuse. Either that or you went to the Labor Day game to watch Ricky Ray light up the Stamps' secondary. Either/or works....


Is it just me, or does anyone else expect one of those Outrider girls to pull on a Jodi Foster Wig and ride out on a Pinball Machine to be the centerpiece of one of those elaborate (and unbearable) Stampeders Touchdown celebrations....


I haven't really played around with the spreadsheet that much, but everything I have done suggests that the cutoff to make the playoffs is likely to be lower than usual - 90/91 points. Unfortunately, as an Oilers fan, this gives me new and no doubt misplaced hope, which is only going to make the inevitable 0-12 end to the season even more painful.


Wait - none of my scenarios involved overtime. That would probably explain it. Back to sweet, sweet hopelessness.


Actually, I just went back through and changed one out of every five games to an overtime game, and that still only gives eighth place 92 points, under the scenarios I've tried.


1 in 4 would be closer to the truth ... perhaps even 1 in 3 in meaningful games as sphincters tighten down the stretch.

See my comment about the distribution of Bettman Points in the "We don't see a lot of holes" thread below.


1 in 4 would be closer to the truth ... perhaps even 1 in 3 in meaningful games as sphincters tighten down the stretch.


I demand the East spreadsheet.


The East? Who gives a crap about the East?


Sac, try posting those sheets on Google docs. It should work.


I threw together an Eastern Conference version. Hope you guys don't mind the ripoff.


Ahhhhhhhh! I just posted one too. Thanks Sacamano, hope you don't mind.