The Flames host the Blackhawks tonight (7PM MT, RSN West), on the heels of the Dion's big contract extension. Have you been wondering what kind of options the Flames have for the forward depth next season enough yet? Here's one crack at it, and note, to count all the assumptions favourable to the Flames, you may want to take your socks off: 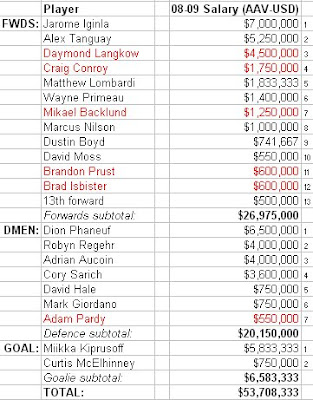 I made a couple of deadline deals, sending Rhett Warrener to the Penguins for impending UFA Jarkko Ruutu, and then picking up a temporary 7th D somewhere else (say Klemm or Dallman from the Kings) for a late pick.

Eriksson gets shipped out in late June to the Wings, who let Lilja walk and want a 1-year veteran bridge to Meech/Quincey.

Since there is no money with which to re-sign Huselius or anyone remotely as skilled, we go to our only organizational hope: 19-year-old Mikael Backlund jumps straight from Sweden to the big leagues.

Aucoin stays, because he has a NTC and frankly I think we'll need him. Primeau stays because there's virtually zero chance of dumping his deal (2 years left!) on another NHL team. Nilson stays because -- pending the next 25-50 games -- I'm not sure how far ahead you get by replacing him. And Tanguay stays because he's needed (or from another angle: the idea of getting rid of him would have to be to get better performance for the same money, or equivalent performance for less money, and neither is possible, to my way of thinking (and looking at the UFA/trading block crop)).

This could be worse, for sure, although I may have exceeded the cap by a few hundred grand. This results in a top 3 lines of (~) Boyd-Lombardi-Iginla, Tanguay-Langkow-Moss, and Backlund-Conroy-Nilson.


Is Backlund really that good that he could jump straight to the bigs? I saw him in the world juniors and he looked pretty good, but I wasn't under the impression that he was on any kind of fast track.

I heard the cap might go to 55 or 56, so that would give some more room to play with also.


Are you buttering Boyd up for a pump and dump? I know he's got some skill from watching his WJC go-around, but I can't see him being Iginla-line good.

Also, where's Nystrom fit in? Thought he had an extended stay in Flame-land this year.


if backlund WERE to jump to the bigs, is his cap # really that high ?? it seems an outrageously large sum for a firstyear, to me.

i think conroy would/will sign for less. he's made it pretty clear he wants to stick around.


haha...Brad Isbister. Where's Josh Green when you need him (again)?


Backlund: latest impressions are that provided he's sheltered a bit, sure! He's 5 months older than Gagner, dropped to his draft position because of injury concerns, and was by all accounts one of the best 18 year olds at the WJC. That's the same cap$ that Irving has, picked in about the same slot the year before.

Boyd goes on the LW with Iginla because I like keeping him and Tanguay apart (they're the only 2 who can drive results) and he seems like the best alternative.

If Nystrom was still under contract for next season, I probably would have put him on instead of Isbister, but he's not.

Conroy: that IS less.


Best hope for you guys is that the NHL passes legislation that only allows each team to employ nine forwards.

BTW, I'm asking because I don't know but has Langkow made enough money where he's just willing to settle for 4.5 mill a season? Cap's going up again and someone's gonna have enough room to make him an offer that trumps yours.


...has Langkow made enough money where he's just willing to settle for 4.5 mill a season? Cap's going up again and someone's gonna have enough room to make him an offer that trumps yours.


The big regret here is that even if Backlund signs in the summer he'll have missed the run to the Stanley.


Good prediction, Matt. Just got it in the wrong order. What happened?


Um yeah ... I just got back from from the Saddledome and I will never again have the three hours I just spent watching that steaming turd of a game. I would love love love to see this team score a goal in the first period and love love even more watching them play with a lead for a while. Because it's been a while since I've seen those things. Hoipefully Saturday night (fingers crossed)

And, only a 6 million dollar man like the Dion could have sketed through his own crease with the puck tonight like he did without notching an own goal. Shut up. I tell these lies to myself to make me feel good.


Calgary needs about 4 more guys before they'll be a threat this year, and contrary to what the MSM would have people believe, a number one centre isn't really any of them. They really need 2 more bottom sixers that can skate well enough to pressure other teams' defence. Lombardi and the 2 kids are OK, and Yelle can be spotted, but every other option (Primeau, Nilson, Smith and Godard) just can't move well enough to help against decent teams. It's just glaring in their own end, and on the back check.

Speaking of slow, the back line isn't exactly fleet either. I think most people that watch the Flames think that they have 4 guys that can play in Regehr, Sarich, Phaneuf and Aucoin. Only Dion is above average as a skater, and my sense is that this is a big part of the reason the Flames' PK struggles more nights than not. Teams that don't win races to loose pucks usually end up fishing them from their net. Sutter needs to find Dion his Brian Rafalski, and Aucoin needs a decent 3rd pair guy to work with.

Oh, and while I'm poking holes in them, is having two static shooter types on the PP such a good idea? Other than if you're Craig Simpson, that is. This isn't just based on tonight, BTW. 4 forwards on both PP units, with Phaneuf on one and Aucoin on the other, might be better, if for no other reason than having Regehr, Eriksson or Sarich out there is a guaranteed fail.

Peachy keen, other than that. They just have the look of a one round and out team.