Latest in a Series 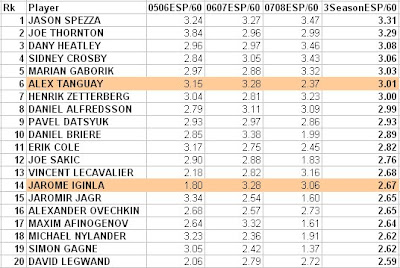 This is the Top 20 most productive even-strength scorers since the lockout. 224 qualifying forwards; each played at least 25 games each of the previous 2 seasons (so no Bertuzzi, Havlat), and is active this season (no Selanne) and averaging 10 EV minutes of ice-time per game. Some more players of interest: 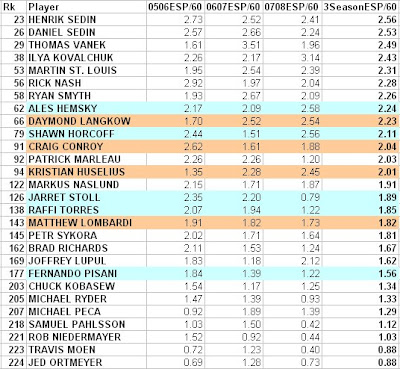 If you watched Bob McKenzie in the intermission last night, you'll know why I included Michael Ryder.


geez...I had no idea tanguay was THAT good.


The fan boards are alive with people thinking that Tanguay for Ryder is a GOOD move.


The saving grace here (fingers crossed) is the experience the Flames had with his brother... they gotta be gunshy about acquiring another Ryder who might not have his head screwed on straight.


It really irritates me that Tanguay gets now respect. It comes from being overshadowed by Sakic and then Iginla all those years, I think.


Shock on the bottom is brad Richards.