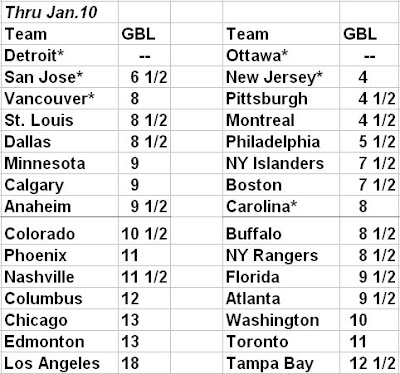 Everyone who put their Western Conference predictions in the shredder back in November might want to go looking for those little strips of paper. If there was a consensus pre-season, it was that the Top 9 teams should be pretty much the same, with maybe the Blues taking Nashville's place. Ta-da! On the other side, the Devils, Penguins, & Habs are really gaining some clearance from the playoff bubble, and the Capitals -- on the strength of wins against some really good (i.e. non-division) teams -- are definitely within reach of the SE title. The odds are that one of the Hurricanes, Panthers, Thrashers, or Caps will eventually take control with a good streak of H2H games. The Canes have the head start, but I'm sticking with the Panthers as my guess.

Also: the Flyers and Blues played their 40th games on Tuesday, so for some more apples-to-apples perspective, here are the quarterly results from Q2. 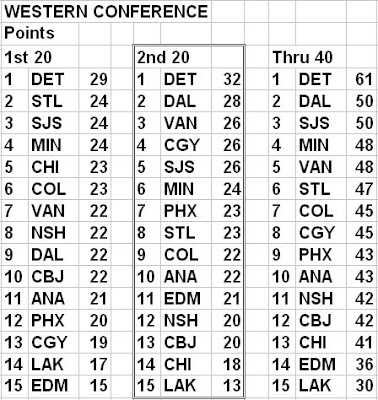 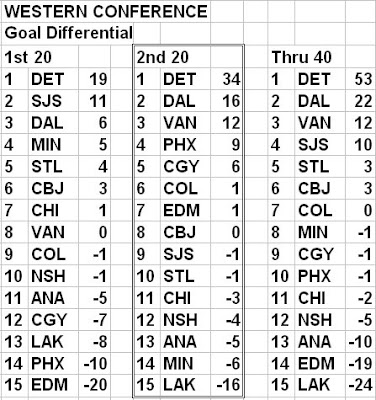 Not too much surprising here, I don't think, although the right-most Points column is the starkest possible illustration of how deep the Oilers' hole is (I'd agree with TB that it's all over but the finger pointing, except that the finger is already pointed at the injured list, and -- present company excluded -- most Oiler fans, media, etc. seem quite satisfied with that). 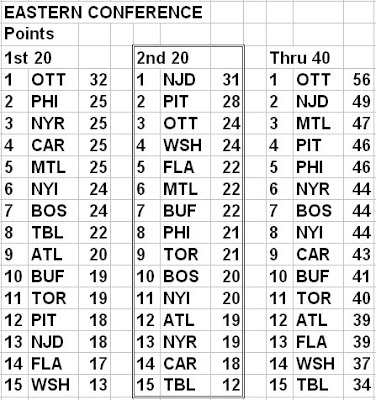 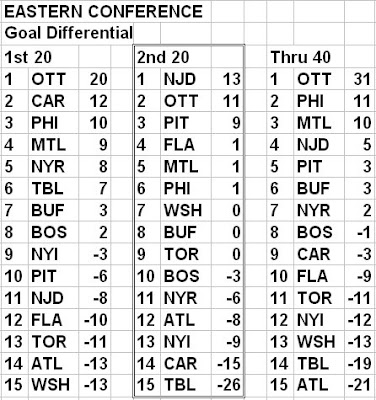 Lightning = Terrible. In fact, (news flash) SE Division = Terrible. Carolina had a good but not Wow first quarter; it's amazing that they could be that bad in Q2 and still have a clear lead.

Also evident here: just how badly a losing streak can kill you. The Leafs after 40 weren't in good shape by any means, but it could have been a lot worse: 4 points out, with a ton of games against the teams they're chasing. Now, having lost their subsequent 4 games, they look well and truly boned.


The change in the Oilers Goal Differential is pretty damn interesting.


Isn't that when they started playing Garon more and Roloson less?

All we need is a twenty game winning streak.


Well, between this and the thread on Tom Benjamin's site I've lost pretty much all hope of the Oil making the playoffs (hope I never should have harboured, but I'm the optimistic/delusional type).

However, I quit looking at the playoff line a long time ago. I prefer to look at league wide standings, as it is less depressing (ignoring games in hand we are above several Eastern teams). I just want to finish around 20th in the league, or at least ensure Burke doesn't get any balls in the draft lottery. Hell, if we need to be buyers at the deadline to make it happen then do so. I'm only half-kidding, I really hate Burke.


You want to know the really interesting thing? I've linked to Andy Dolphin's standings before but they're just amazing this year. He has what he calls an "improved" RPI. RPI is, if I recall, Ratings Power Index - it's big in US college sports. Anyway, by Dolphin's figuring, the Oilers are the 12th best team in the West - fair enough - and the 16th best team in the NHL! His numbers suggest that the East has 11 of the worst 12 teams in the NHL, which is beyond amazing. 4/5 teams in the SE are worse than the Kings...it goes on.

I can't figure out why the East is so bad.


I made a comment earlier, no idea where, that the Oilers would be a playoff team in the EC...

My theory is that stupidity is breeding stupidity out there, and the best example of that I can think of is the clear lack of interest in Pronger from the idiots out East...