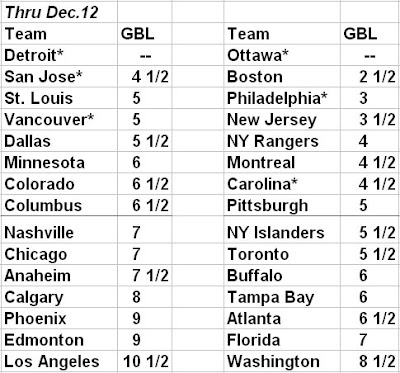 The Cavalier, in 16 HmGP, is 14G-17A-31Pts, +12, and seems to be doing it against the visitor's #1 line (looking at a number of their home games using Vic's H2H site, I'd say there's little doubt that Jarome and Vinny will be seeing a lot of each other tonight).

Although Marc Denis got the shootout win in Montreal on Tuesday, odds are that usual starter Johan Holmqvist will be in net tonight.

(Sidebar: my other idea for today's post header was from the same movie -- "Hey babe, I negotiate million dollar deals for breakfast. I think I can handle this Eurotrash." Also, I think I've blogged this before, but the biggest Hartford Wolf Pack fan on the internet once had this to say:

...the worst player in Wolf Pack history?-- Holmqvist gets my vote, hands down.

**Thumbs up to Jardine for getting the ball rolling on Olympic roster spitballing! Here's my guess, about exactly 2 years until the actual roster is named: 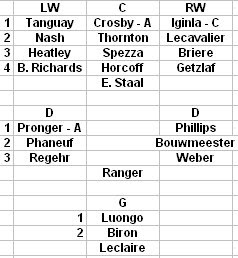 The main thought -- concern? -- I had in the 15 minutes I spent looking at this was that while Canada could probably ice eight excellent forward lines, it's quite likely that there will teams, with an 's', in Vancouver with a better defensive corps. Because right now we're looking at a field of Pronger, Phillips, and 25 guys with non-trivial holes in their games (based on Nov/Dec Phaneuf anyway; October Phaneuf could be pencilled in for 25 minutes a game).

**I admire Allan Muir's work at SI a lot -- I'd put him in the Top 5 of paid hockey writers -- so it is with both surprise and horror that I report: of all the terrible ideas suggested to "help" the NHL in the past several years, the one he is marketing in yesterday's piece is the. worst. of. them. all.

**Interesting data point on the quality of the 2008 draft: Canada's final roster for the World Juniors includes five draft eligible players, named to the squad ahead of:
Of the roster players who are drafted, none are prospects of the Flames or Oilers (or any Canadian team, for that matter)


Because right now we're looking at a field of Pronger, Phillips, and 25 guys with non-trivial holes in their games

I dont know. Bouwmeester is really starting to look like an elite all around guy to me.


That's fair enough -- I really haven't seen enough of the guy (or anyone in the EC) to say... I can only go off of numbers & reputation.

I think the general point holds though... the 4th line for every other country will be NHL role players (certainly not All-Stars anyway). But on D, just looking at a few other countries:

Not only does Canada not have any clearance, talent-wise, on the blueline, but the Czechs and quite likely the Americans will have a better crew.


Look out for Detroit.

Michigan would promptly annex the entire nation of Sweden to protect their pipeline. :)

(Seriously, I think it's a horrible idea as well.)


If Kipper keeps up his pace tonight, I'm ready to pronounce him cured. It's going to be tough, however. I think our best chance depends on our forwards maintaing pressure. Something similar to St. Louis period 2.

Oh, and not taking penalties is important. And unavoidable. Any bets on how many tripping/hooking penalties will be called as a result of bad clearing attempts?

If we win this game, I hope with Mackle the start tomorrow. If we lose, we'd be crazy to do so.


This isn't going to be a fun game to listen to.


And another reason for Phanuef's recent struggles: being paired with Anders Eriksson. What a gloriously stupid play he made to basically give the Bolts their second goal.

Lord I hate that guy.

Actually worth the money for a change.


metro: I think you went a bit light on your predictions.

I wonder if Denis will be any better?


metro: I think you went a bit light on your predictions.

I had it right for about 80 seconds.


Filip Kuba is at -3 right now. I like that we've taken 20% off his plus/minus in less than one period.

Wow, another mistake, another goal.


Phaneuf was picked on that last goal against. Like, hugely, obviously.


Phaneuf was picked on that last goal against.

Did he LEAP out of the way?


Did he LEAP out of the way?

Sadly, no. He should have Torres'd his way through it.


Crap. Another giveaway, another goal.


Worst game for Sarich as a Flame. He's given the puck up for no reason at least 3 times this period. The last one was an unforced, needless pass up the middle with his players leaving the zone. It was stunningly stupid.

This game's going to be ugly. Hale and Eriksson are weak enough, but the Flames don't have a prayer when one of their shut-down guys is playing terribly too.


We've been shutdown by replacement goal tenders before. We better not do that again tonight.

Nevermind, we finally get a hattrick!


Yeah, our defence is playing like crap, all around, except maybe Regehr. (I'm sure he has a giveaway or two coming up.) Thankfully it's not total goals, but goal differential. As long as Kiprusoff outplays Denis, and our forwards outplay theirs, we can still win this.

Kipper earned that last goal. Delay of game is a really dumb penalty. Right up there with too many men.


How is this game which we have waited 3+ years to see not on TV.

Oh right. Sportsnedmonton is carrying the Oilers and the Wings.


Rock on! Never a dull moment.

This is ridiculous. But in a good way.


Iginla is finishing some unfinished business.


I just got home from dinner and the Zoo Lights and all I can say is holy crap! 9-6?! Craziness.


+6 for Huselius, -6 for Kuba and Ranger. 5 assists for Phaneuf. This is the kind of game I would have happily paid $12 for.

Can we swap this game for the last one we played there?


Two hat tricks in one game. Huselius +6. Iginla shows up Lecavalier in his own barn.


Uglier than the Brind'amour-LeClaire lovechild.

I imagine some people will look at how bad our defense was this game and get worried. I say look at it this way: if November never happened, we would look at a game like this and say a good team finds a way to win even when some players suck.