Why wait until the middle of a cold dark night?


Six afternoons over the next week and a half are probably going to determine the fate of the Flames 2007/08 season. They need a 4-2-0, or a 4-1-1, or 5-1-0 mark, simply to reduce the distance between them and 8th place. And simply treading water until they get back home is no good, for two reasons: the first is that time's-a-wastin' (my motto's always been when it's right it's right), and the second is that their sked on this road trip is riper than their sked after they get home: the first 7 games after they get back (5 at home) are Stars, Devils, Canucks, Ducks, Canucks, Rangers, Sharks.

**The thing that gives me the most satisfaction about this site is the probability that hockey fans who read it are smarter for the experience. This is not to say that I know more about hockey than the people who make their living in it; I don't. Charlie Simmer knows a lot more about the game than I do, and just because he usually fails to demonstrate that in his capacity as a TV analyst doesn't change that fact. There are a million unquantifiable things about the game that I couldn't pretend to understand.

However, we do some things of value here (and in the hockeysphere in general), and I like the idea that regular readers can no doubt see through some of the familiar tropes of the paid media, as well as identify instances when they are just plain wrong.

In that spirit... last night Millions (who btw I think is good at his job) and Simmer had a doozy of a mercifully-brief discussion before the OT last night. Millions posed the question to Chucky: "What's the strategy here in an interconference game? Do you take a few more chances?" To which Simmer replied, "I've seen coaches use 3 forwards and 1 defenseman in this situation."

Shades of the anachronistic Guelph study! From 1999 to 2004, there was 4-on-4 OT but no shootout. If one team scored, they got 2 points and the loser got 1; if there was no goal, the game ended in a tie and each team got 1 point.

So: in OT games against a team from your own conference (with whom you were competing for a playoff spot), there was the obvious benefit of scoring a goal and gaining a standings point, but there was also a -- lesser, but non-trivial -- benefit to denying your opponent a goal and a standings point. A tie was a better result than an OTL.

But in games against the other conference, this second benefit did not exist: a tie was an identical result to an OTL, because who cares if the team in the other conference got an extra point. As such, the incentive to throw caution to the wind and go all-out to score in OT was much greater in these games (hence the idea of 3 forwards).

This calculus does not exist anymore because one team wins every game. NO TIES. There are no strategy implications whatsoever to conference v. non-conference opponent. Someone is going to win, so every team's best strategy all the time is simply to do whatever makes it most likely that it will be them. That may mean trying to last until the shootout, or it may mean trying to avoid it, but whether the opponent is a West or East team is entirely irrelevant. FYI.

**What the hell is going on with Dion Phaneuf? As MetroGnome noted in his Blues pre-game,

Phaneuf had one of the worst months of his professional career, on the heels of one of his best. Hopefully he settles somewhere in between.

True. Last night at times he looked frighteningly incompetent, and particularly later in the game he looked weak and tired -- my amateur eye tells me that whatever his problem is goes beyond possible confidence issues, or the ups-and-downs of a long season. Which leaves two things:
Millions used "Flat-footed" to describe Eriksson on the shortie, but how about Phaneuf on Malkin's PPG? 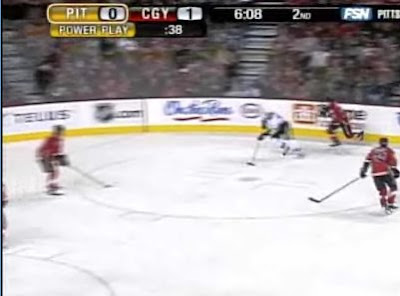 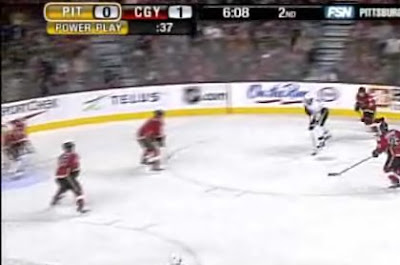 Feel free to watch the video at NHL.com, but thanks to the soccer-uni-like rink boards, we can see that Malkin is moving towards the net and cocking his wristshot, while Phaneuf moves approximately half a letter in TELUS. While defending the pass to, it looks like, Kipper. Oh, and the reason the Pens are in the Flames end is because of a half-assed Phaneuf clearing attempt around the boards. Considering Regehr is now out for ~ 4 weeks, this is really... bad.

**And I'm sure the O**ogosphere will get to this, but... BWAAAA-HAHAHAHA:

Forwards Jarret Stoll and Raffi Torres will be watching the game from the press box, while Liam Reddox will be penciled in for his first career NHL game.

Stoll and Torres were on the ice for the Penguins' second and third goals in the third period en route to a 4-2 Pittsburgh win over Edmonton on Wednesday. Zach Stortini, the other forward on the Oilers' shutdown line, will play tonight...

UPDATE: This is for Danny in the Comments, and also so maybe I can get this song out of my head by giving it away. Also, what did this dude do with his Lego before YouTube?


Too bad we're so low on defence, Keenan should put Eriksson in the press box for a game or two or three.


*When everythings a little brighter in the light of day*

I have nothing to say on the post, but I loved the title.


When I heard Regehr broke his foot last night, the very first thing that went through my head was Reverend Lovejoy -

"It's all over people! We don't have a prayer!"


In my opinion that's a bad example of flat footedness. Dion's already in a bad position (i'd have to watch the whole play again to recall if it was his error or bad luck) in that play. If he moves at the same speed as Malkin, Malkin will jump around him. Defenceman should pretty much never be going the exact opposite direction of the offensive player at a high speed, that's a recipe for getting beat. On the other hand, if Dion backs up, he's also screwed. From the starting position he was in, pretty much anything he did would've been the wrong thing.


Can't agree, although I'm not insisting that I'm right (and yeah, he's in an unfortunate starting position)... he has to try to disrupt Malkin there. For one, maybe he doesn't get beat! For two, even if he does, Malkin is not going in a straight line, giving another PKer a few more fractions to cover for him. And for three, where's Malkin going if the beats Phaneuf? Looks like he would be right on Kipper's doorstep, eliminating the shot option, giving Kipper a chance to pokecheck, etc.


Matt: I can agree with you, maybe Dion wouldn't have gotten beat, and maybe another PKer does come in - but if Dion does get beat, he looks like an even bigger idiot (and I gaurantee someone would ask what the hell he was doing in that particular instance). Also, in your other PKer instance, that could've drawn an even larger odd man assignment on Malkin, creating another open Penguin. And whether Malkin had a lot of room behind Dion or not, I'd still rather not have Malkin in behind every Flame on the ice.

Look, I'm not saying Dion didn't make an error, just that he had a lot of bad options and that you're only assuming he wanted to get to Malkin quickly instead of playing a containment style, and then you're drawing a conclusion about his overall footspeed based on that assumption. You could be right, I just don't think it's really strong evidence.