Oh...you hit Santy Claus! Just for that, no toys!

• Oilers and Canuckleheads tonight. I'll be watching the game with Loxy and Cosh, along with others. It will assuredly be a good time, especially once the Oil trounce Sanford & Duds.

• Tyler and others have already pointed this out, but I believe it's worth repeating. After laying it all on the line and calling the Edmonton Investors Group a "group of the all-time greatest guys in Edmonton history," in this story, Terry Jones attributes the following quote to Cal Nichols:

"It's all about the arena downtown. He didn't want to go there unless he owned the arena."
There's only one problem with that quote. It's wrong. Here's the correct quote, which appears in John MacKinnon's piece.

"He made it clear that he simply did not want to go there unless he owned the hockey team," Nichols said.

• Here's more Katz and arena coverage from the Edmonton Journal:

"Can the team owner stay offstage in a hockey-mad town?" (Keith Gerein)


• Pierre McGuire and Rudy Giuliani have more in common than just looking like George Costanza. Here's how I picture their ideal board at the beginning of Single Jeopardy. 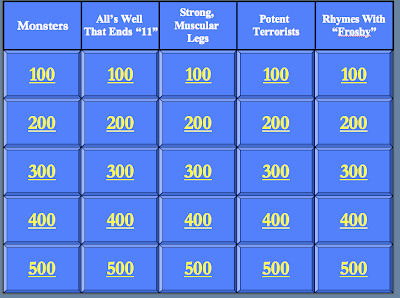 Prediction: 5-1, Oil. While "Three Blind Mice" plays in the background, Loxy rants about boys and how much she hates Canucks fans, I rant about the arena and the media, and an inebriated Cosh pulls a Moe and smashes our two heads together. Hilarity ensues, including me blocking Colby's devastating eye-gouge attack with the old vertical-hand-over-the-nose trick, followed by a "nyuk-nyuk-nyuk," a ""certainly, judgie,"" and a consequent slap of my face.


This Katz fella sounds OK: went to Ross Shep, has a law degree from the U of A -- puts him in pretty good company, with guys like Wayne Gretzky... and me!


Where are you guys watching the game?


Where on earth did you get the inspiration for that Jeopardy! board? Outstanding.


Don't you know they changed the rules a few years ago so that all clues are worth double now? Get with the times, Grabia. (That's how the NHL can increase scoring -- double the value of all goals.)

I think despite the fact that there's every reason for us to curb-stomp the Canucks, I think this will mysteriously find its way into a shootout, because apparently it's the only way we know how to fucking win. So let's go with an inexplicable 6-5 SO win.


Don't you know they changed the rules a few years ago so that all clues are worth double now?

I knew someone was going to call me on that.

Where on earth did you get the inspiration for that Jeopardy! board?

It actually came to me in one of those half-conscious dreams. Isn't that sad?


I would love to have seen a "Literally, Crush" heading in the Jeopardy image.

The link to Jones' story has mysteriously disappeared.


The link to Jones' story has mysteriously disappeared.

Ya? Hmmm. Weird. It's still up here. I'm fairly positive I double checked my link, but I could have messed up.


Link works in the main post now, too. Thanks for the heads up.

I would love to have seen a "Literally, Crush" heading in the Jeopardy image.

Ssshhh. I was planning a whole series of these. ;)


Well, if they are as good as this one
They're gonna help traffic.

Henrick and Daniel combine for 6 goals, Matt Cooke scores short-handed, and Trevor Linden bounces one in off Raffi Torres' head.

Drew Macintyre with the Shutout, and Temujin returns to the BoA comment section to arrogantly gloat. Let the drunken revelry begin!


Drew Macintyre with the Shutout

Who the hell is Drew Macintyre?


You're being a dink here. Maybe a chocolate sprinkle landed on the fucking page and Terry read it wrong.


Hey, Lupul got another hattie. The boy is on fire.


Is he implying Jones would like a sprinkle
JUST lying there?


Who the hell is Drew Macintyre?


The question is: Who Isn't Drew Macintyre

Although I'm sure you Edmonton fans are celebrating now that you have Vancouver in The Stranglehold with only 20 minutes to go, but I thought I'd share some news with you: Calgary is now on pace to be tied for points with Columbus for 8th spot . . . with Calgary having the edge in wins.


Mattias Ohlund, you beautiful fool, you.


This is statistically impossible.

Horcoff & Pisani, what can you say or do.


I think the Oilers are single-handedly making a convincing case for why the shootout has no place in the NHL.

without this farce of a ratings ploy by the NHL, the COIL would be in there rightly place: DEAD LAST in the league!


There may be a case for eliminating the shootout, but 'Edmonton wins an improbable percentage of them' doesn't seem like a particularly convincing one. But I'm a bit partisan.


I was joking about the Stranglehold comment. I should have known better.

Seriously, this needs to be added to the BoA glossary:

The Stranglehold aka Right Where We Want 'Em:

Edmonton with a third period tie.


Changing the rules to stop the Oilers? Gee, I wonder where I've heard that ditty before.

We deserved this one (and Detroit for that matter) in regulation. Too bad they can't fucking hold onto a lead.

Since this puts Calgary against Detroit in the first round, I consider these COMPLETELY UNACCEPTABLE.


Finishing above Anaheim would have to be considered a triumph for this season. Alas with the freakshow that is Pronger, Neidermayer, Schneider, and Beauchamin, followed by an O'Donnell and whoever is 6th filler, I don't see the Ducks NOT making the playoffs.


"I think the Oilers are single-handedly making a convincing case for why the shootout has no place in the NHL."

Why? Because we're good at it?

Here's the one part of the game that makes no distinction of size or time in the league. So if you have a few young, fearless hotshots on your team , how best can you use that asset?

My guess is that the Oilers practice the SO alot. And guess what? The goalies get pretty good at it too because obviously they're between the pipes during those practices.

They're playing by the rules and taking every advantage allowed them in the process. Just like every other team in the league.

I dunno. Sounds like pretty good coaching to me.