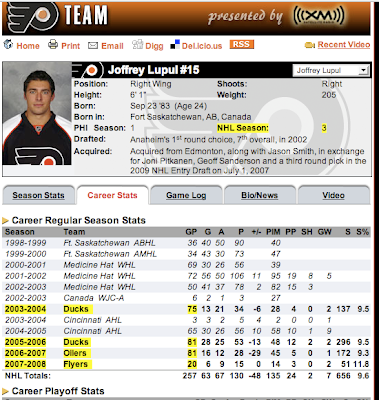 My Friday morning gift to Matt. It's still a head scratcher. Courtesy of the Flyers homepage.

Oh, and just for giggles, go take a look at Lupul's Quality of Competition and Corsi numbers. Suggestion: start from the bottom and work your way up. It will take much less time.

• Can anyone give me the breakdown for all the opposition Zoolander has points against this year? I mean specific players on the ice for Points For (Points Against would be neat, too). Vic?

• Another one for Matt. This one he'll like. On MacT and the shootout: "Each team sent out five shooters on Tuesday, and once again, MacTavish elected to let the visitors shoot first. His preference is to win it on a goal rather than a save."


I wish there was a comeback player of the year award, so that Lupul could win it when he finishes with 60+ points this year.


Don't worry. At this pace, he'll totally win the Calder.


There's no need to be jealous, Andy. Not every team can have talented players like Lupul. Philly is blessed.

I know. God. I'd give up Chris Pronger to get him, that's how awesome he is.


I know. God. I'd give up Chris Pronger to get him, that's how awesome he is.

Don't be silly. You'd need to be getting back something like 4 more assets for that deal to even remotely make sense.


At the risk of being a total dingus, and with all due respect to the Quality of Competition crowd, isn't the point of hockey to score goals, thus leading your team to victory? Hasn't Lupul done this for the Flyers. Didn't he do so for the Ducks?
Does it matter whether he runs up his points against the other teams' scoring lines or checking lines? Does that change the final score in any way?
Maybe the fact he didn't produce in Edmonton is because the Oilers are the problem. Just a theory. Again, with all due respect.


I guess if two and two make five, anything is possible.


with all due respect to anonymous. watching lupul last year was more painful than stabbing yourself in the eye with a stick. it became apparent very early on that my 4 year old niece could knock this guy off the puck. wait scratch that. my two year old niece could knock that guy off the puck (she's tougher and helluvalot feistier than her older sister).


I think Lupul is a players than can score goals if put into the right environment (weak opposition, low traffic, clear shot at net, etc.). That environment didn't exist in the MacT system and trading him was the right decision for us.

MacT plays best with 2-way forwards, not offense-only shooters who need a clear shot at the net


What's the save percentage behind Lupul and Briere? It has to be phenomenal. Regardless of the Corsi number, that line's getting brutalized on simple shots on goal. Minus 170. The second and third closest teams are ATL and BOS at -139 and -137, and then it takes a huge drop. For the sake of discussion, Edmonton is -75 and Detroit is +259.

Philly's shooting percentage is the highest in the NHL. If you figure that Corsi and SOG DIF represents puck possession then another oddity is that Philly leads the league in penalty minute differential.

The ceiling is going to cave in the Flyer's any second now.

Zoolander is also shooting a little higher (2 %), percentage wise, than in his previous two [/wink] seasons. Though I believe alot of his results are being driven by his linemate and their phenomenal luck so far this season. For instance, Briere is shooting at almost 25% this year. He's always been an excelolent goal scorer, but what he popping right now isn't sustainable.


At the risk of being a total dingus, and with all due respect to the Quality of Competition crowd, isn't the point of hockey to score goals, thus leading your team to victory? Hasn't Lupul done this for the Flyers. Didn't he do so for the Ducks?

The goal of hockey is to score more goals than your opposition, thus leading your team to victory. Whether you do it by putting in 6 to their 5 or 1 to their 0 is really irrelevant. In Lupul's case, he doesn't seem to have the defensive game to be an asset - he has to play soft minutes to be anything close to even, whereupon he'll score enough goals that you have to pay him more. If I'm going to have someone who can't eat soft minutes, I'd rather he scores 5 goals and allows 5 than scoring 20 and allowing 20 - 5 goals costs you less and the win contribution is the same.

I'm not sure which camp you're in regarding Thor, but his 21/24 EV numbers from last year are looking better and better everyday, no?

With all these talks about Philly being outshot and drawing way more penalties then they're taking, it sounds a lot like how we were all waiting for the Habs to collapse last season, ie they were living on their PP.

Seems they just can't count out in Philly. Probably too many blows to the head. Might even explain how Gagne was cleared to play a couple weeks back.


with all due respect to anonymous. watching lupul last year was more painful than stabbing yourself in the eye with a stick.

I think Oiler fans know which of these streaks represents the real Lupul.