**Caught a bit of a discussion on the radio yesterday afternoon about the position between Iginla and Tanguay, and while it was by no means fascinating, there was some food for thought.

The guys were talking about Matthew Lombardi's late-game turn as the nominal #1 centre against Minnesota, and whether it's time to give him a run in that spot on a semi-permanent basis. Dave Rowe was saying Yes, because (a) Conroy is not producing and (b) Lombardi's speed is wasted playing with Nolan and Nystrom (or whoever is on the 3rd line wings). His co-host -- recent convert from the dark side Dean Molberg -- was sort of inclined to agree with him, but brought up the fact that if Conroy is centering the 3rd line, then it likely becomes even more of an offensive black hole than it already is, since Lombardi's speed is the one and only thing that ever creates chances for that line.

My practical question -- which I really don't know the answer to -- is whether the advantages that Lombardi would bring to the Iginla line (the speed, and better touch around the net) would be cancelled out or even outweighed by the disadvantages, i.e. the ways in which Conroy might still be a better player than Lombardi. Specifically, Conroy is probably still stronger on the puck and better in the low cycle. While he's not creating a lot of scoring chances per se, he is still doing a nice job of keeping the puck in the other guy's end... and this is how plenty of Flames goals end up happening. Tanguay gets possession, Iginla moves to some open real estate, Tanguay exploits an opponent overcommitting or just otherwise out of position, pass, shoot, score.

The line would almost definitely be more dangerous in transition with Lombardi, and I think it's now safe to say that Lombardi is a more effective backchecker than Conroy, but what would be lost? Dunno.

**It's by no means a given, but, this weekend the Flames will presumably be starting a goaltender other than Kipper for the first time this season. They play the late HNIC game in Edmonton, and then again 22 hours later in Vancouver.

Matt Keetley has been manning the end of the Flames bench for a couple of weeks now, but if I were to guess I'd say that McElhinney will be called back up for this start.

It wasn't looking good for Curtis Mac a couple of weeks ago. He subbed in for Kipper late in the 2nd period of the San Jose game, and apart from allowing 1 goal on 2 shots, he looked very uncomfortable handling the puck. So after that game, he gets sent to QC to get some game work, and Keetley comes up. And the first game in QC? C-Mac allows 5 goals on 8 shots and gets yanked halfway thru the 2nd. Tres mal.

I'd actually like to see him start the Edmonton game (Garon! McElhinney! It's Hockey Night in Canada...). Even when Kipper has been at the top of his game he's struggled at Reachall; also, it removes the coaching temptation to change plans and start Kipper back-to-back in Vancouver if it looks like a must-win game... which they all do, always. 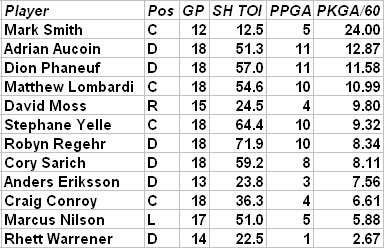 **Penalty Killing: I remain concerned that this will be a Flames bugaboo all year. They're allowing too many shots, too many high-quality shots, and Kipper isn't stopping enough of them.

As you can see at the left (*5-on-3s are excluded, **I reposted this table, the original left off the MIN game), while the defensive games of Phaneuf and Lombardi have been markedly better at EV this season, their PK results are still poor.

They've allowed at least one 5-on-4 goal in 13 out of 17 games this season. They had little choice but to look at their 4/5 success rate against MIN Tuesday as a small victory; meanwhile, Columbus(!) has killed something like 36 of their last 37 penalties at home.

If the PK is going to improve in any significant way, it will involve an improved Kipper. Here's his numbers by situation over the past few seasons:

That says a lot. His PKSV% is down 37 points from last season, when the Flames' PK was, as you may recall, also shitty.

**Finally, a decent little update on the minor league squad from Allan Cameron. I'm glad the coach has optimism to spare, because the stats page sure doesn't give me any.


Specifically, Conroy is probably still stronger on the puck and better in the low cycle.

Stronger on the puck, probably. Better on the cycle? Im starting have some serious doubts. There's been a number of instances recently where the forecheck has died whenever the puck has hit Conroy's stick...

Iginla will pass to Tanguay. Tanguay will pass it to Conroy. And then Conroy will lose it, mishandle it, or pass it to someone on the other team. It drives me insane. Notice how many of Tanguay's/Iginla's points have been Off The Rush recently?


I hadn't, but upon further reflection... yeah. I count 1 goal in the past 8 games that arose from Iginla's line occupying the offensive zone at EV (his deflection of Aucoin's shot in MIN).

What makes me most insane is when (usually) Tanguay puts it right on his stick -- or where his stick should be -- in scoring position, and Conroy doesn't even get a shot off, or direct it at the net. Surely Lombardi could convert a few more of those...


Yeah, you touched on something when you talked about how Iginla's lines works. I'm always struggling with why some guys can play togethers and why other's can't. For instance, Stoll and Hemsky don't mix like they should. They were put together as a soft min line in the '06 run, along with Samsanov, while the Horc and Peca lines took on all the tough opp, and they just didn't get it done, well outside of the third period in G6 vs the Wings. They were together for awhile though and nothing really happened. And in Sammy's time as an Oiler, he looked best when paired with Horc though it hardly ever happened unless we were playing four on four.

So, always interesting to wonder why and how lines work. As for Lombardi vs Conroy, I think there's something to be said for what role they can play. If say, Conroy go could down and do a job helping his third line brethern play some top six tough opp, then the Langkow line should be able to go nuts on the other team's third lines while the Iginla line plays the other tough opp. Note: in terms of having Iginla, you HAVE to use him against some tough opp. he's gonna fall into it anyway because of the amount of TOI but he's also so good that you have to untilize that particular weapon.

So, what I'd be looking at is I was a Flames fan, is there two guys you could partner with Conroy that could play top six tough opp, thus allowing your second line all the soft min?


Matt, wasn't this a problem at the end of last year as well? Conroy was decent after the trade, but he isn't the skater he was in '04. It really looks like Iginla in particular might benefit from a faster pace. As good as he is, there are occasions where he can't up the tempo on his own. If Lombardi can't help fix that problem, there are no other internal solutions.

As for the third line, the lack of speed/skill that the Flames have in their bottom six other than Lombardi is glaring. If Conroy is moved down, who helps him? David Moss is about it, and that's damning in its own right. Every one else on the roster is a fourth line plugger. It's not like there's a lot of high end talent on the farm. Short of giving a guy like Dustin Boyd a run with Conroy/Moss, what option that the current roster possesses gives a glimmer of hope offensively? Nilson? Mark Smith? Primeau? No to all, IMO.

I note that Dan Ryder is still T-5th in scoring for the Baby Flames, even though he played only 6 of their 15 games and has -- from the sounds of it -- quit hockey. Bright future! ?!?!?!


**It's by no means a given, but, this weekend the Flames will presumably be starting a goaltender other than Kipper for the first time this season. They play the late HNIC game in Edmonton, and then again 22 hours later in Vancouver.

How about the Oilers and Flames agree to play backup-vs-backup? That could be fun...


Matt, as I self-absorbed Oil fan who doesn't watch other teams enough, what's your take on the Flames defence compared to last year?


Mike, I'd say the biggest factor so far is that Regehr has underperformed... apart from the 4th line, he's the only guy on the team who is seeing more shots against than for when he's on the ice. That's pretty atrocious for a guy who I thought would still be a better (all-around) player than Phaneuf this year.

When he's good, which is most of the past 5-6 seasons, he's smart, tough, and executes well... gets beat wide once in a while, but that's about it. When he's bad, he looks slow and, uh, bad.

Phaneuf has been fantastic, Warrener has been a lot better. Eriksson has been doing a fine MAB impression. If Regehr gets back to filling the role he's paid to fill, the D overall should be excellent. If he doesn't -- like the season to date -- it's way too average for what they're being paid as a group.