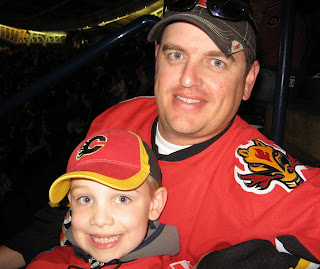 Being a Flames fan on the brink of the 2007/08 NHL season brings a faint sense of deja vu. A year ago, it was time for unbridled optimism. Two years ago, mostly the same -- maybe not quite the same level of certainty about the quality of the club, but hockey was back and the team was the defending WC champ. And for several years before the lockout, it was fingers crossed and wishes made.

Fall of 2007 as a Flames fan, though, is a lot like Fall of '93 or '94. You know it's a good team, but you don't know how it's going to work out in the end, and there is absolutely nothing to be done but watch and see what happens.

Last season the Flames got some fine, even outstanding, performances at all positions, and for whatever reason, it just did not translate into team success. There's little doubt that this season will once again bring some fine performances, but will they all come together and be reflected in their record? My answer to this is: ?????
----------
To guess what's going to happen this season, everyone uses the same basic method: start with last season's results and then make adjustments based on changes as you perceive them. For instance, Pierre McGuire likes Carolina to rebound and make the playoffs because Cam Ward has now been married for a year and is used to it, and will thus stop more pucks (I'm not joking).

To me, the first adjustment has to be for the elements of last season's record that are least likely to repeat in a way that favours or harms them: that is, how often they were tied thru 60 minutes, and how successful they were in OT/SO. This will be something to look at more mathematically after 2 or 3 more seasons, but as things stand now there is very little reason to believe that major variations from the following are anything but random:
If you play mostly in low scoring games, will you go to extra time more often than average? Makes sense. If you have a bunch of breakaway shooters who have proven themselves to be great at it, should you win the shootout more than you lose it? Makes sense. But: a great baseball team still only wins 6 out of every 10 games, and a lousy one still wins 4 out of 10. I don't care how ill-suited the Washington Capitals lineup is for a shootout; they are never going 1-11 in it again. And regardless of whatever inherent qualities the Canucks might have that advantages them in 4v4 OT, it would be ludicrous to assume they will put up another 12-3 record in that situation.

So... here's a little table of the NW Division standings from last year. The bottom part simply adjust the number of OT/SO games they played, prorates their success in the regulation games, and gives them a ~.500 record in the OT/SO. Has anyone mentioned that things look pretty tight here? 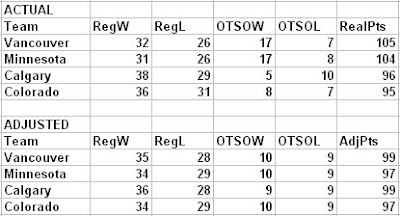 What this means to me is that these 4 teams essentially started this past off-season in a dead heat. Colorado would definitely seem to have improved their roster, so they should probably be the favourite. The Wild, Canucks, and Flames all have pretty comparable rosters to last season. We've all seen the stats on how much better Minnesota was with Demitra and Gaborik both healthy, so these figures might undersell them a bit too -- they should probably be favoured to finish 2nd.

I have no reason to believe that the Canucks will play any better or worse than last season, so whether they exceed this total this season or fall short is probably up to the hockey gods. And Calgary... we're back to square one. If Keenan can figure out a way to wring more success out of a comparable roster, then they'll clinch a playoff spot somewhat comfortably. If he can't, then they'll be fighting for 3rd in the NW and 8th in the conference. Again.
----------
Time to put away the calculator, and for that matter, the left brain. The Flames open the season tonight against the re-tooled Philadelphia Flyers (8PM MT, CBC).

I think I'm going to hold my breath and wince for the first couple of weeks. I suspect mixed results and tentative play in the two home games; a beatdown in Detroit; and perhaps some progress but mixed results next weekend in Dallas and Nashville. Then they have 2 days off and play the Avalanche in Denver on Tuesday the 16th, and I'm looking at this single game, #6 of 82, as a bellwether. My guess is that this is where the penny drops -- the Flames earn a convincing win, and they're off to the races, leading the charge for the NW title. If they get kicked... I don't really want to think about it.

UPDATE: My response to Chris! is this nice line from Leanne at Open Ice Hits:

Yep, it's been a long six months. Bring on the lame fire-themed puns.

so with that in mind I will call a 5-1 win for Philly with Hat Trick for Gagne.

(and how can you say with a straight face that the teams in 03 and 04 going in were good. The only reason the flames made the playoffs in 04 is because of the November pick up of Kipper)


Oilinator, what the hell are you talking about? You do realize that Dowd and Downie are different players, right?

Solid post, Matt. Good job one-upping me with the kid pic, too! :) It's not too late for us to bring him up here and raise him to cheer for the right side, by the way. Think about it.


Love how I got busted for picking Downie to score, but not Rathje or Eklund (Pelle, not the blogger).

That 'whooshing' sound you hear is something flying way over your head.


God, I missed the Downie thing myself. All I saw was Dowd. Me dumb.

...and suspended again by the AHL