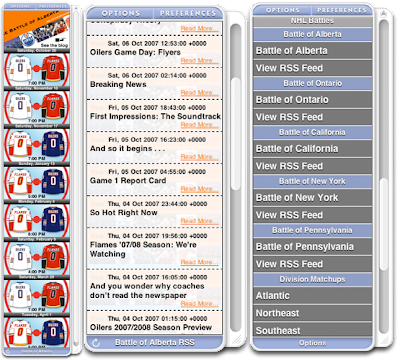 Widget lovers will be happy to know that the 2007/2008 NHL season is now available at Hockey Widgets.com. Kelly Phillips, who runs the site, has added a bunch of cool options and features this season; he's also incorporated the new Reebok jerseys into the mix. One of best new additions to this year's widget, at least to me, is the "Battle" option. Last season, Kelly only made a widget for The Battle of Alberta. This season, he has options within the NHL widget for all of Matt and Sacamano's "Battle" children. Fans of The Battle of Alberta, The Battle of Ontario, The Battle of California, The Battle of Pennsylvania, and The Battle of New York will now be able to have a widget for that site on their Dashboard (the new widget is not yet available as a Yahoo! widget). The Battle widgets will serve as an RSS feed for each site, as well as a scoreboard for all the matchups within each specific Battle.

Because BoA is the One Battle To Rule Them All, a specific widget just for us is on its way. But Kelly is tired after slaving non-stop for weeks on the main NHL widget, so it's is going to take a few days. In the meantime, please check out and download the widget he has already completed. Kelly builds these widgets because he loves the game of hockey, and he does it all for free. Kudos and many thanks to him for all of his hard work. 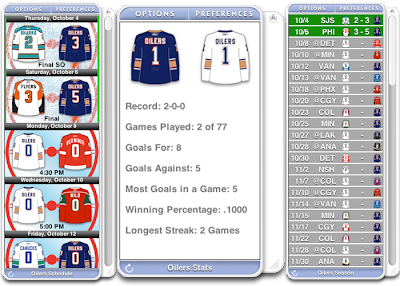 
I am still a bit short on the whole concept, but this much I have been assured: in this day an age, one simply cannot take over the world without the proper widgets.


I need some urgent help from the Oilogosphere.
I am a huge Oilers fan living in San Francisco. I have had the Center Ice package for 3 years now, but this year I find that I cannot record (DVR) the hockey games. Comcast says this is because the networks have added something to the digital feed that blocks the Center Ice games from being recorded. Has anyone else encountered this problem? Or is Comcast lying to me?
I work out of town and MUST record these games. I have missed every single game so far this season! I need a workaround!


Not sure if it's okay if I post this about the 'needing to see Oil games part", but this is what I do.
Mods, if you need to delete this, please do so, with my apologies as to my ignorance.