Falmes Coach Uses Cash Once in a While, Lets Wife Wear Pants 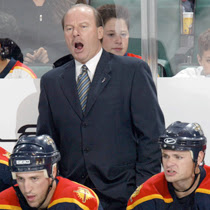 I'm not sure how I missed it, but four days ago Eric Francis finally published his hard-hitting interview with Iron Mike.

Entitled "Iron Mike Fans the Flames", the lede tells us that:

As one of the most controversial coaches in league lore, Iron Mike has raised eyebrows for everything from refusing to dress his players in gaudy third jerseys (St. Louis) to his penchant for pulling goalies. In the midst of introducing himself to players on his eighth NHL club, Iron Mike took time to chat about the perils of moving, what he hopes to change about the Flames and why he's become such a big fan of the New England Patriots. [my emphasis]

Does "Sun Media", which I assume to be Eric Francis' Korean pseudonym, deliver the goods? You be the judge.

Here's a sample of Mr. Sun's probing questions:
And what does Keenan hope to change about the Flames, you ask? Here is that portion of the interview in its entirety:

Sun Media: Biggest thing you'd like to see changed with the Flames?

Keenan: In a broad comment, it's to go deeper in the playoffs. But specifically I can't give you a fair comment right now ... I don't even know the players.

Whoooo boy -- it's a good thing that he's coaching now where you can "focus more on your team, your farm team and the teams in your division and conference" rather than still working in television where he would have to "stay on top of the league".

Labels: What? I'm coaching the Falmes? Who plays for them again?


Wow, haha. That interview is all over the place. I guess that's why Francis makes the big bucks, or something.


Did he ask him if he had an innie or an outie belly button? Albertans need to know this stuff!

Well, if my team had such ugly uniforms, I'd do the same thing