I want to talk today about assets and liabilities. YKOil put up a nice post early this month outlining the "asset classes" for NHL teams -- it's a solid primer. I chuckled at his conclusion:

All of this may also be patently obvious to everyone, in which case I apologize for wasting your time.

No, I think slightly clear to very few would probably be a more accurate assessment. Definitely no apologies necessary. Anyway, I'm going to focus on budget/cap dollars.

NHL GM is not an easy job. Yes, sometimes some of them do patently stupid things, but it is a major challenge as a whole. Not only do you have to fill a roster with a variety of players who can (as a group) score, defend, kill penalties, cash in on PPs, hold their own physically, and stop pucks -- and complement each other in doing so -- but you have to do it with a fixed and finite amount of dollars, all the while living with the consequences of your previous mistakes (or those of your predecessor).

Those dollars are precious. The successful teams are going to be those who have many players who outperform their salary relative to who you could hire with that same salary on the open market (via free agency, trade, what have you). There are certain types of players without whom you cannot be successful, but their value as an asset is heavily dependent on their contract situation. Extreme example:
In other words, depending on his contract, Iginla can be anywhere from a tremendous asset to an extreme liability for the Flames. Naturally, all of this is getting around to the big question: what is Darryl Sutter going to do with his roster over the next 12 months?

Iginla, Kiprusoff, Langkow, Huselius, Regehr, Phaneuf. 5 UFAs and 1 RFA as of July 2008, and all except Iginla will be getting multi-million dollar pay raises... from somebody. 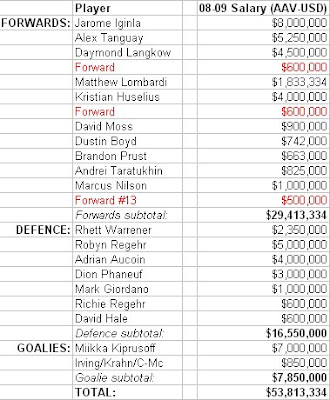 This here table is what the Flames' salary situation would be in 08/09 if the only thing Sutter did starting now was re-sign those 6 players to new contracts at near market value. No UFAs above the min this year, none next summer either. A $53.8M payroll. Hey, that might actually be below the cap next season, but clearly there is no chance that this is how things will go.

As noted, as this season moves on, the value of these players as assets (in the long-term, piece of the puzzle sense) diminishes. The flip of course is that (especially if the Flames are a strong team) their value also increases, in the short-term, we need premium performance right now to win the Stanley Cup sense.

It's a brutal juggling act, and difficult decisions will need to be made. If the Flames are good next year, more than one of the Six Players will end up walking in July '08. If they're not, some will be traded for lesser players with smaller contracts, signed to longer terms.

One thing I got out of Sutter's post-Rd1 presser was that while, yes, there were going to have to be decisions made going forward, he quite liked the bright side, which is that he has a bunch of terrific players signed to favourable deals for this upcoming season. I definitely did not get the sense that he's interested in dumping (say) Langkow for some younger prospects now simply because they probably won't be able to re-sign him later.

The one big thing I get from looking again at the salary table above is Seriously, why are the Ryan Smyth rumours so persistent? He's a terrific player, would make the team better, and they could afford him this year, but it's only plausible if the Flames have no intention of re-signing Iginla.

Iginla: signed to a long-term extension late this off-season. 4 or 5 years, 8-ish mill per year. His Flames debut pre-dates Kipper's by 3/4 of a decade, face of the franchise, still damn effective, only 30 years old, etc.

Kipper: man, have I gone back and forth on this one. Before the playoffs I was of the relatively firm opinion that Sutter was going to extend Iginla and roll the dice with Kipper (no trade, no new contract, nothing until at least mid-to-late season). Yeah, the playoffs affected me: Kipper was the team's MVP by an order of magnitude -- how could you not tie him up long term? Then once Rd1 faded into the distance, I reverted to my original opinion. Now having seen Giguere's deal, I suspect Sutter would agree to the same one ($6Mx4) if available. Dunno -- but I will stick with the guess that Iginla is a lot more likely to get extended, and sooner, than Kipper.

Phaneuf: No hurry here, in fact I doubt anything gets done before next offseason. I'll guess he signs one of those longish-term 3rd/4th year MLBer type deals, where he gives up some years of arbitration and free agency in favour of more security and a pay raise now. ($3Mx4? $3.5Mx4? Thereabouts.)

Huselius: Gone by July 1 2008 at the latest, with the hopes they can replace him internally.

Langkow/Regehr: no doubt the Flames would like to have these guys around well into the future, but it will heavily depend on what they expect to get paid. Sometimes guys are willing to accept less money to remain where they are; sometimes guys are willing to accept less money now (say in December) than they could likely sign for later (in July '08) because of the peace of mind. If both of these factors enter into their salary demands, and Sutter is certain enough that the demands are less than what it would cost to replace their contributions, then they get re-signed. If not, they don't.

Last thing: if the Flames sign even one big or semi-big name UFA (say Hannan), at least one of the guesses above is quite wrong. So when that happens, and a reporter asks how they can afford him past this year, and he avoids the question, what is the correct answer?
My instinct is that (3) is correct. Your mileage may vary.


Oilers fans will giggle at this because it will confirm their long-standing conviction that the Flames are essentially a mediocre (or worse) team without our top-notch goaltender, but, I'll say it anyways...

Im scared to death of losing Kiprusoff. I would rather lose any of the other pending big contracts - Iginla, Regehr, Huselius - than Kipper. I think his contributions would be harder to replace than any of those listed.

Also, I believe Langkow walks after his contract is complete. The Flames have a lot of centers in line behind him (although I wouldn't argue that any of them are ready to fill his shoes).


I thought the rumour around Smyth was that the Flames would then flip Tanguay to Montreal? That was what I saw on TSN, anyway. I don't know if that even works based on your spreadsheet, though.

Don't worry. Keenan will have ruined him by then.


Man, you're crazy if you think that they'll let Kipprusoff go. He's not going anywhere. Trust me.


Man, you're crazy if you think that they'll let Kipprusoff go. He's not going anywhere. Trust me

If the Flames didn't conceivably think they could win the whole damn thing next season, Regehr would be getting traded in the next week.

BUT, Regehr may be functioning like a rental player this season for the Flames, in some reverse fashion; depending on where they are at the deadline, do they trade him for whatever return is out there, or do they keep him, hope they get a pay-off by going deep, and let him walk?

That's the guy I think goes. He and Huselius.

And gnomer....no shame in fearing losing one of the three best goalies in the league. Look at the first sixty games of the Oilers 2005-06 season for the living body of proof that a good team with bargain basement goaltending is mediocre. I'd say a smart investment for the Flames (or the Oilers, for that matter) would be a back-up with starter potential. Hannu Toivonen anyone?


If Sutter has the chance to sign Kiprusoff for $6M/4, and doesn't, then the Flames might be improved by moving Keenan to GM. Hell, they could trade GMs with Edmonton's and be even, if Smyth truly could have been signed for 5.25 last summer.

The difference between an average goalie and an exceptional one is a goal every three games or so... an extra 9ish wins a season. Plus what a hot goalie can do in the playoffs. You should pay a lot for that.


The problem with Kipper, such as it is, is that the risk in signing him to a longterm deal is greater than that the risk with Iginla.

- Greater risk that Kipper is totally ineffective (i.e. can't even play him) at the end of a long deal

I'm not trying to oversell this, though. For fuck's sake: he's started something like all but 9 of the 120 games the Flames have played since he was diagnosed with a inflamed pelvis. Debilitating? Wat dat?


I think my position now would be that playing 161 games in back-to-back seasons makes it more likely, not less, that Kiprusoff will be capable of playing 80 more this year and maybe for several years to come. Major career interruptions are becoming pretty rare for these guys.

Martin Brodeur, for one, has now played 70+ regular-season games in 10 of the last 11 seasons. In the 11th, he played 67. Counting playoff games he once appeared in 192 games in back-to-back years (!) and didn't break down.


Point acknowledged for sure, but for once I'd like to see that argument made with Martin Brodeur excluded as an outlier.

I think it's more likely that Brodeur is a freak than the shining example of what new age goalies can handle, what with their offseason workouts and Gatorade.


Announcer: "Martin, how do you do it? How do you play so many games each season?"

Brodeur: "Well, you know, I stay in excellent shape by engaging in a great deal of vigorous sex with my sister-in-law."