As I've noted a bunch of times on this site, I'm not impressed with momentum as having any great predictive value. That said, at some point the past is the past, and shouldn't be given equal weight with more recent events.

So like I did last season, I'm posting the conference standings for games 21-80 for each team. Logic in prose form is at the link, but lest you believe this is completely arbitrary (I grant you, happily, that it's a bit arbitrary), here's my take:
Here's the numbers: 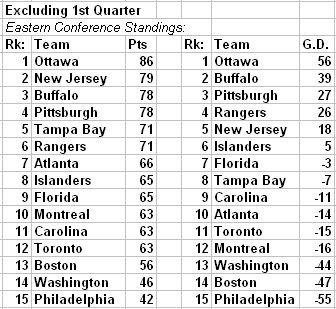 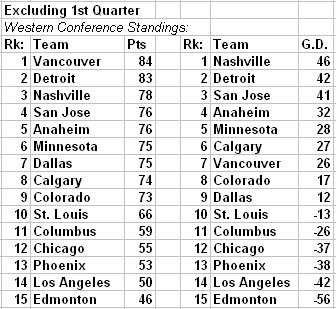 What does this tell us that we didn't already know? Dept.: In the West, very little. All the teams are good, and fairly tightly bunched at that. Vancouver's performance in the standings (and Dallas') are a bit out of proportion to their goal differential, which is relevant but shouldn't be over-interpreted; if you're playing lower scoring games as a whole, you need a smaller +G.D. to be successful. I have a separate post coming that tries to make a bit more sense of the West.

In the East, though, I think it's instructive. Hey, I might as well stick my EC predictions in here. Note: # of games is not intended to be taken literally; it's a proxy for how close the matchup appears to be. I'm pretty sure everyone does the same thing, but no one is explicit about it.

Buffalo over NY Islanders in 6. Some of the numbers really don't look too bad for the Isles. Both the PP and the PK are roughly a wash with the Sabres. The Isles are actually the 3rd best Even Strength team in the East, behind BUF and OTT. But per the table above, the Sabres have proven themselves pretty adept at outscoring the opposition. And if that sounds too clinical, then

New Jersey over Tampa Bay in 7. I wish they could both lose; they both deserve to.

The Devils won an inordinate number of 1-goal games this season (aside from their 13-9 record in OT/SO, they were 19-7 in 60-minute 1-goal games). They led the league in goals scored with Brodeur pulled (7!) despite being the 4th-lowest scoring team. Call me a numbers geek, but I don't see either of things as especially repeatable.

And then there's Lou. Little-known Law of Hockey Metaphysics: the maximum career number of desperation late-season coach-firings permissible by a GM without massive karmic implications = 1. Lou jumped the shark on April 2nd. I'll echo what Lowetide said: "I won't be cheering for New Jersey this spring. Then again, I never do."

As for Tampa Bay... they were a sub-.500 team in regulation (29-33-20). The G.D. above actually flatters them because of their 10-2 record in the shootout. J.R. Ewing gave his wives more respect than John Tortorella gives his goalies.

The Lightning could well win this series -- this prediction is the one I'm least confident about -- but if they do, they get crushed in Rd.2. The opposition would be a lot tougher, and unless they dispose of the Devils in 4 or 5 with no OT games, the high minutes of their top guys will start to wear.

NY Rangers over Atlanta in 5. They're about even 5-on-5, but the Thrashers' special teams stink. The ATL has spent the last half of the season hanging on for dear life; the NYR seem to have spent it getting better. Also, Bob Hartley is a dink.

Ottawa over Pittsburgh in 5. I'm definitely leaving myself open to accusations here of not giving the Penguins the respect they deserve. My response would be two-fold:
Bad luck for the Pens to draw the Sens in Round 1, but that's the way the cookie crumbles sometimes. Their road to the SCF still looks loads easier than that of any West team, roads which I will examine tomorrow. Yes, Go Flames.


Loved this quote from uni back in October.

I just don't see Sidney Crosby leading the league in scoring and being Hart worthy this soon...if ever. Phenomenal talent but could he outscore a line of Horcoff-Smyth-Pisani head to head?

haha, kool-aid was flowing back then wasn't it.


I wasn't going to give the ATL much love either until I discovered L'il Jon is a big fan. Now I'm 110% certain of a Thrashers cup victory. I can't wait to see him sitting in the stands during the finals, holding that blinged out chalice, shouting ha-yeaaah!!! everytime Hossa touches the puck.

I agree with you on the Sens-Pens. Sens dominate the series and will not choke. Fleury can't or won't win the Pens a series yet.


I'm like the only person to pick the Pens over the Sens, which is probably because there is no factual evidence to base it on. It's my pet pick. I just kinda like it.


Bob Hartley just totally seems like the kind of coach who could get goaded into some sort of incident with Sean Avery. Count on it.