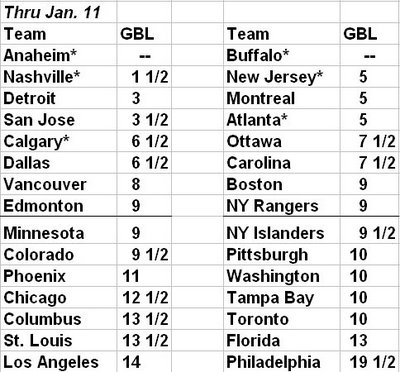 The compression of the NW Division standings is what gets most of the attention, but boy, the EC playoff race is tight: a 2.5 game separation between 5th and 13th. Five weeks ago, the same nine teams were separated by 2 games. As of today, the set of soon-to-be-UFA defencemen on teams that are clearly not going to make the playoffs looks something like this:

But hey, the trade deadline is still over 6 weeks away -- by then, more teams will be out of the running. And since hardly any playoff teams will be interested in blue line help, I'm sure it'll be a buyer's market! ...patience, K-Lo, don't be mortgaging the future.

Also, I don't wish to alarm anyone, but would you look at which NW Division team and their 27th-ranked powerplay is nevertheless up to 6th in the NHL in GF/Game?


At what point does it become relatively certain that the divisional representatives for the playoffs looks like this:

If Phoenix were, improbably, to maintain their run, surely Dallas would have to drop back as the 4th team in the division; and after the sacking of coaches, are the bodies good enough in St. Louis/Columbus/Chicago to make up the difference?

Thus, by the deadline, I think there is a very good chance you can make the following call: the bottom 5 (Phoenix, Chicago, Columbus, St. Louis, and LosS Angeles) are out of playoff contention, in any serious sense. And the NW is still a five horse race.


Worth pointing out that if you omit the Flames forte, empty net goals, they drop six spots in the rankings.

Considering the amount of stick that Flames fans have taken for their team's lack of offense in the past, they're going to want to cling to this though. Cue the "empty net goals are the most exciting plays in hockey!" arguments from the City of Cows. :)


Be honest Matt....things have gone about as well as can be expected for the Flames forwards, outside of the Iginla injury and perhaps Kobasew's "production" (how long until Flame fans start going Dan Cleary on this guy?).

As for the Oilers, you can put the Smyth/Hemsky injuries aside, throw out Horcoff and Lupul not producing, and disregard Torres and Pisani having issues with consistent offensive contribution. It all comes down to this:

It doesn't matter how much talent you've got at forward; if your defense is so inept that it cannot complete a 5-foot pass or clear the zone in a manner other than ringing it around the boards, you're going to have issues giving your forwards the chance to score a goal.

With that, my new montra for the next few weeks...

1) How many EN goals do the Flames have?

2) Is it true that Shawn Horcoff actually hit 8 posts so far this year? I saw that elsewhere yesterday and assumed it true. I know he's got at least 3 since New Years, and I know of at least 1 disallowed goal...

The 8 posts was from me, I read it somewhere (Riv?)

He definitely has 2 disallowed goals (almost identicle goals where he banged in a rebound when there shouldn't have been a whistle), plus the lost on assist on Smyth's goal against Dallas.

Posts off the top of my head right now are the 2 against Vancouver, 1 against LA and the one against St. Louis off the crossbar, so there's atleast 4 counted for ;)

Well, that certainly supports my thought that he's had awful puck-luck this year, crazy goal against Luongo in Vancouver in early December notwithstanding.


Empty net goals aren't the most exciting play in hockey, but they do matter (just ask Patrick Stefan).

They are also a pretty good indicator that you are winning a lot of games.

So yeah, I'm gonna cling to that. And the 11 shorties.


Not to mention the fact that if you eliminate the Flames en they you really should remove them from every team. You aren't pulling a Rory on this, are you?

That's for all the teams. I just cut and pasted the table that Matt linked to, then punted the EN goals for everyone and sorted them.

Not that it really matters, they're winning games. But anything that diminishes a Flames fans' enthusiasm, even a little bit, well it just has to be said.

It wasn't me on the goalposts thing. As you say, he's had quite a few lately though, plus the two wrongly disallowed goals. One of those years.

Last season the 94-10-83 troika had damn few posts between them at evens. I think Hemsky had none and Smyth and Horcoff just a couple each.