Potpourri for hundreds of millions of dollars please, Alex

**Andy and the commenters bring up a lot of good points about a new Oilers building. The academic papers that puncture the Economic Spinoff myth are recommended reading.

I would just like to, once again, raise the "moral" objection to public funding of a hockey rink in Alberta: a substantial segment of the population is willing to voluntarily part with their money to fund NHL hockey, so it is simply disgusting to force the remaining population to pay for it as well.

Even if I accept the turning of NHL trophies into commodities and even if I accept the idea that hockey leadership is an ability on a par with goal scoring, and even if we were talking about a dead Hall of Famer... Even if all that, I would not name an elevator after Mark Messier.
[...]
Not only was he an awful player in Vancouver, he was the worst ever captain of the Canucks "leading" them through what was the most divisive and disappointing three year period in team history. Messier floated through the games, he hid from the media after embarassing losses and he chirped on mates who were outworking him. He stole his $20 million. Yet the debacle in Vancouver counts for nothing. It has all but been erased.

**News Flash (unless you're fan of one of the Alberta teams, or alternatively, have been paying attention): Derek Boogaard is still only the 2nd-toughest fighter in the NHL. Eric has the video. 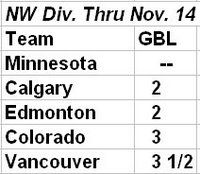 The Flames have now won 5 games in a row (all in 60 mins) and sit in 8th position in the conference, 1pt behind the Oil with a game in hand. The coach had a quote I liked after last night's game: "...I think that's a media creation, where we were way off in some place and all of a sudden we came out of the bush and found a trail. It's different than that."

I'd still like to see him project more optimism when things aren't going well, and the special teams have got to get better (a PPG and a SHG last night are a good start, obviously). But, congratulations and credit to the coach for getting the team back in it early. Also, if you didn't catch the highlights of the 3-0 win last night, and have scoffed at the Flames' skillz, go watch on NHL.com. Tanguay's 2 primary assists were Gold!, and Iginla's 2 secondary assists were the furthest thing from garbage points, especially the sick, tape-to-tape 50-foot pass through traffic on the opener. A few other Flames numbers of note:

**Lastly, at the risk of infuriating Roger Millions even further: I was semi-grumbling about his verbal quirks during the telecast last night, and Mrs. Matt suggested that a Millions-inspired drinking game might be appropriate. No doubt! I'm a bit rushed at the moment to structure the whole thing, but here's some of the elements I would include to serve as a signal to pick up your glass:
And the big one, if you're planning on getting plastered:
Please add your own in the comments. Have a nice day. And, Go Flames.


Laraque's a lefty? That definitely threw the boogeyman off a bit. Laraque's recovery was impressive though, I thought he had lost it at first.


The boogey man can't claim surprise, he'd already lost three fights against Georges before the Pheonix game.
You'd think he would remember the handedness of the fighter that's consistently beaten him.

What's the career standing now between the two?


Consider adding "can't find the handle on it" to the Roger Millions drinking game.


Also should add "in the new NHL" which he said repeatedly last night.


Bah, that's no Oilers Drinking Game, let me tell you. The Hemsky Rule alone can get you wasted in the first ten minutes.


And now William Houston of the Globe and Mail is weighing in. In his column posted last night (Nov.14th), he mentioned

He also took shots, on a blog posting, at the Calgary radio station The Fan 960, which is owned by the company that Millions works for, Rogers Media.

And he knocked Sportsnet's competitor TSN.

"[If you are] going to rip us, get the facts straight and cut the crap," he wrote on the fan blog Calgarypuck.com.


the squibble service!! That is rich. Who knew Watters had such a bon mot in him!


Matt said...
If you're looking for good underlying fundamentals in this streak, Voi-la.


Hmm... some of those underlying fundamentals also include being outshot by 42 shots combined in the last five games. I realize that Kiprusoff's an elite goalie, but I'm not sure the Flames need to try to prove it every night by being outshot by an average of 8-9 shots. Personally, I like that strategy. I hope they continue doing that. Might as well make it a nice even 10 shot deficit every night.

There is a PP TOI disparity of about 8 minutes there in those five games, but good NHL PP units do not generate close to 5 shots/min.


That "tale of the tape" thing on that fight clip is the most, as MacT would say, retarded thing ever. God, I hate all hockey broadcasters.