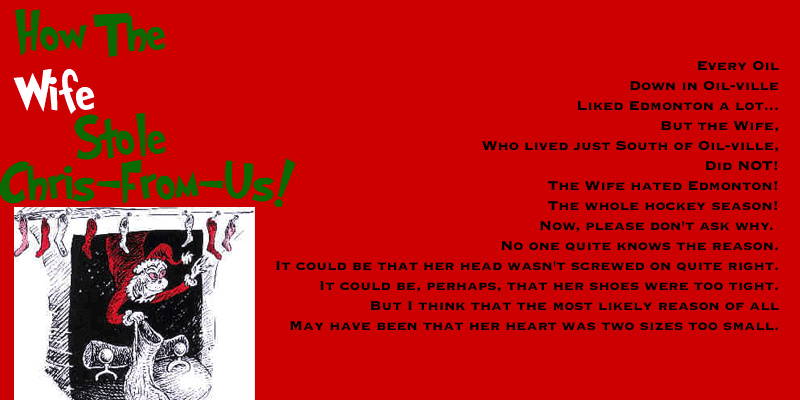 I actually don't blame Lauren Pronger for anything (nor do I feel I have reason to), and I stopped being angry at Chris Pronger about two weeks into July (although intellectually I find his handling of the situation cowardly and his catch-all excuse completely unsound), but sometimes, the Muses just take you places.


• Staios and Markkanen are out for the Oilers. Syvret and Deslauriers have been called up, and may draw in. Personally, I would have liked to have seen Tom "Brad" Gilbert get the call up over Syvret, but we all know MacT is going to go with the safe choice (i.e. previous NHL experience). Grinny and Spazzy are probably out for the Ducks, which means Michael Wall and David McKee will likely be the goaltending tandem. As long as the Oilers get more than 11 shots on them through two periods, they should be fine.

• While the Ducks seventeen wins are impressive, don't let anyone fool you with the "they've only lost twice" argument. They've lost six times in overtime. Plus, they lost to the Flyers, despite Philly only getting 4 shots on net over the last two periods. As Earl has pointed out, they also haven't had a very difficult schedule. The Ducks are a good team, maybe even a great team, but they haven't yet proven that they are an elite team.

• Anyone else getting a little tired about the Oilers players fawning over Pronger? I know you are still friends, and a player's loyalty to his city and jersey is mostly a thing of the past (if it ever existed at all), but could you guys at least pretend for a few minutes that he's on the opposing team and that that really bothers you? I'm just waiting for one of them to pull a Jeremy Roenick and tell us we are stupid.

• The Oilers of course traded Chris Pronger for Joffrey Lupul, Ladislav Smid, and two, maybe three, high draft picks. But the trade also freed up some cap space, allowing them to sign players like Lupul and Petr Sykora. Let's take a look how each team has fared with its new players, using some traditional statistics.

• For good measure, let's look again at how the Ducks have fared against the Oilers in the 21st Century:


• I've been good friends with a guy named Shane O'Bryan for eleven years. Little did I know he'd get beat up one day by Derek Boogard.

• The game is on PPV, but Kinger says it will also be available on TVU.

• Via Kukla, I see that the L.A. Times is reporting that "some fans reportedly plan to pelt him [Pronger] with pacifiers." That's news to me. I'd like the L.A. Times to tell me who "some fans" are.

• Thanks to Eric McErlain for giving us the shout out in his NBC article yesterday.

• John Mackinnon has a great take on Pronger's press conference, in his blog for the Edmonton Journal.

• Earl has some sound advice for the Oilers faithful: look for the name, not the number!

Prediction: 4-2, Oilers. Smytty, Horcoff, Lupul, and Hemsky. Plenty of boos and funny/caustic signs at Rexall, but no Edmonton Handshakes.

A new addition to the lexicon, perhaps?


Including the Sykora signing in order to even up the comparison is dishonest. He wasn't part of the trade and you know it.


Good call on the Oiler players fawning over Pronger. I want at least one guy to come out and say hey, what he did was wrong and we're still pissed off.

I just one thing tonight, okay two things: a win and someone to actually hit Pronger and smash his face into the boards. Too much to ask??

Damn it all to hell. I keep doing that, and I don't know why. I got it right the first time I wrote it. I'll fix. Thanx Jim.


You would think the players would feel a bit more betrayed. More like the poor fans that can't see this game on a national feed.

Here's hoping that the vitriol flows, someone nails Pronger, and the Oilers win big.


I've been thinking about this too... but really who is going to hit Pronger? A nice Matt Greene check would be good, but another defensemen (stay at home variety at that) ... not likely. Raffi could running after him... but Pronger would likely catch us out of position and throw out some break away pass to Selanne.

Likewise, Stortini did not stay up with the team.

I think we are better off just beating on the scoreboard. I wouldn't mind Hemsky dancing in around him for a goal though.

With no forwards called up, I guess Reasoner will be back in action yes?


With no forwards called up, I guess Reasoner will be back in action yes?

I would assume so. He participated in the skills competition on Sunday, and looked fine. Staios might be in, as well, according to the Sun.


Ya don't need to cleanly hit Pronger. As my wife says, a two-handed chop to the wrist is good enough ;-)

Seriously though, instead of simple boos, I'd like to hear a whip-crack sound on the loudspeaker whenever Pronger is lining up before a faceoff. He should understand what that means.


Oof. The worst thing about that O'Brien fight (AND the subsequent Fedoruk fight) was that the Ducks took instigator penalties each time just to get their spirits (and faces) broken. This at the time when Minny was sporting that league-best power play, too!


The Ducks have had a pretty soft schedule. It has been heavy on the home games at the very least. Despite the excuses, they've still been better than I expected. They slapped the Sharks around last week and I was convinced that was the best WC team coming into the year.


No one speaks ill because it's us against them and us is the NHLPA and them is management and the fans.

Pronger fucked the other guys on the team by asking for a deal and then Lowe forgot to leave their money on the nightstand when he brought in a 20 year old D and a 20 something forward who doesn't look the most intense or interested.

I saw Pronger talking about there's still a lot of youth left on the Oilers and there's still promise. That was a kick in the nuts because it brought back the point that for the 100th year in the row the Oilers are once again rebuilding and to paraprhase JS.Pronger has the primary assist.


Don't throw batteries at me, but I'm pretty sure it's going to be a blowout in favour of the Ducks...


The most disappointing thing about the lead-in to the game is the total lack of vitriol being shown by the Oilers players. Where is "that f***er abandoned us and we're gonna go out there and show him who the best team in the Western Conference is." Instead, I'm reading quotes from Lupul, Horcoff and Smyth like they've been elected directors of the Chris Pronger Fan Club. Its' sickening. Pre-expansion, players got fined for fraternizing with the enemy.


can confirm reasoner is playing... seems to have put oil up 1-0


Little quiet around here. Just got home, any comments on P1?

Is Hemsky being benched or did he get hurt or something? ESPN says he's only had 4 shifts so far, and 2 giveaways.


HWSNBN not on for either goal eh? And the crowd seems soft on him in P2?

And that Winchester kid sure makes it easier to forget Le GG.


19/15 have looked really good so far, IMO. Nice to see 15 show up in a big game. Aside from a few close calls I think we've very much carried the play. Roli has looked sharp as well.


Hemsky hurt is shoulder, done for the night.

Winchester put a beating on O'donnell after O'donnell tried to pick a fight with Smith.

No Greene is absolutley giving it to O'brien.


Wow, that Getzlaf shot was phenomenal.

Very exciting game, especially the sequence that saw the ducks take about 100 shots and miss the net every time while Rollie was doing backflips in the net.

The game had the feel of the playoff series, only the team that played harder actually won tonight.


Veryproudofya, do you happen to do colour commentary for the Ducks?


Fuck that was a Disney ending; I thought we were giving that storybook shit up.


what a weird game. Pronger seemed like he didn't want to play it...right down to the fact he skated off the ice along while his teammates celebrated the OT winner.

the fans started giving it to him in P1 but then almost totally laid off after that.

meanewhile the Oilers PPV crew hardly even played up the Pronger angle. they showed no signs at all and they had this lame ass "who's the biggest villian in Oilers history" and yes Pronger was there but so where the Flames???I mean who did they expect to win that one.

what a fucking weird night.


well earl...it woudl've been a different story if the Oilers had a full D corps. but we'll see how you guys deal if you get an injury or two.


I had a sinking feeling in the second intermission when Ethan Moreau said something to the effect of "We're up two-one and Roli's playing well enough that we can hang on to win." And then he uttered some crap about needing to play "situational hockey."

And so the typical second period suck was rolled out for the third period. Utterly disappointing given how much drive the Oil showed in the first, dominating the play and owning the shots (which were 11-3 at the end of the first, I think, before moving in Anaheim's favour at the end of the second).

Maybe in the spring we'll be happy for the point. But not now.

earl, how do you stomach ahler and hayward? anaheim play by play guy consistently gets his facts wrong- torres is local edmonton boy who led the team in scoring last playoffs with 14 goals. hayward and ahler sound like they have man crushes on the entire ducks team... and thanks for explaining what a scoring chance is to me.

oilers ended up getting what they deserved, unfortunately, but fuck, if you're going to lose in ot, at least get scored on with 7 or 8 minutes left to play instead of 20 seconds. fuck that rips my heart out. similar to the detroit game, i guess. perhaps that evens things out with the hockey gods.

any word on what's up with hemsky's injury? without him on the ice there is such a noticable lack of skill. bunch of guys with their tool belts on.

fuck selanne still has his wheels at 37. fuck the ducks looked fast and dangerous all night. why can't the oilers do that?

why do the oilers continue to suck every second period? fuck, put the boots to a team for once!!!

i am going to write "fuck" one more time. feel ripped off after tivo'ing the game and staying up 'til 1am to watch the game out on the east coast.


earl, how do you stomach ahler and hayward?

Tivo the game at six, and start watching at seven. Skip anything that sounds like useless analysis, especially if it comes between periods.