• Anyone else notice the tag at the top of mc79hockey?

• Mike W has a fantastic drawing of Anonymous up on Covered in Oil. It's been added to the Glossary.

• I went for a drink with Phoff from Puck This! last Friday, and we had a good talk about hockey in Montreal, amongst other things. I recommend checking out Phoff's piece on Guillaume Latendresse, Patrick Roy, and Guy Bertrand. I'll also add that I broke down NHL players by province ten months ago, the last time that silly idea was raised.

• Kinger has the Liles knee on Smytty up on Alwyas On The Road. I still can't believe he hasn't been suspended. Then again, why should I be surprised?

• YouTube and the NHL have joined forces. It's not surprising, considering the NHL's recent deal with Google Video, and Google's recent acquisition of YouTube. I'm sceptical about the deal, if only because it likely means the NHL will be hawkish about their content on the site. I really hope the NHL embraces the "viral revolution," and lets the fans help market the game.

• On the Forecheck has an amazing post on the "leading practitioners of hockey's Dark Arts." It's my early candidate for Hockey Post of the Year, if for no other reason than it reinforces my great dislike of Mathieu Schneider.

• Ingmar Bergman does some wonderful photoshopping. It might not sit well in this part of the continent, but I dig it.

• I received a nice email from Darren Krill at the Oilers today, asking me to donate our fundraising efforts to the Oilers Community Foundation. I will do so, and let you know when it has been submitted. Here's a screen capture of the email. 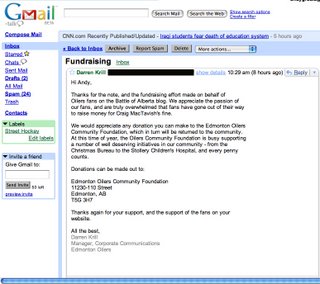 • "Blender," "Vaunted," and "Stempniaked," have all been added to the Glossary.


I noticed MC79's tagline the other day and almost choked laughing (I was at work). I also noticed that for a few hours, it read "Fire Crag Simpson". Funny stuff.


Re: Liles/Smyth -- Rob Kerr on the FAN960 has a phrase that I should probably start using more often, as it really captures the spirit of the thing:

"The Colin Campbell Wheel of Justice"


"The Colin Campbell Wheel of Justice"

Ya, it really makes no sense. It's one of the most obvious calls I've seen in a long time.


Did the NHL hire Maggie the monkey to do the wheel spinning?

Guess not, SHE probably would have go the call right.


Stempniak with the shot...


My God. When do we start the "Ryan Smyth for the Hart Trophy" campaign?


Did both teams take their make-our-defense-stupid pills tonight? Everything up until that Smytty goal was a gong show at both ends.

Is the Blender finally working? Lots of jump tonight.


"Textbook 5-on-3 hockey?" Is Ferraro on something?


Ah, when's the last time we crack open a beer and enjoy a 3-0 lead like this?


Ah, when's the last time we crack open a beer and enjoy a 3-0 lead like this?

No doubt. I haven't even felt the urge to gouge my eyes out yet. But I do hear the name "Stempniak" waaaay too often.


Tuesday? Oh, you probably weren't including "me" in "we".


I'd mention Smytty's goal pace right now, but I don't want to jinx it. Jesus Christ, you think this guy wants a new contract, or a Stanley Cup, or something?


That new NHL commercial with the Canes dancing makes me want to commit violent acts against my fellow man.


me want to commit violent acts against my fellow man.

Nice work on the fund-raising by the way.


Regarding our MacT fund: That sounds like a very good cause. I'm glad you received that email.


I'd mention Smytty's goal pace right now, but I don't want to jinx it. Jesus Christ, you think this guy wants a new contract, or a Stanley Cup, or something?

Will someone tell me again why Smytty isn't wearing the C? It's not like Captain Canada doesn't have the experience, talk more to officials on the ice during game play, or represent the Chi of the Oil more than anyone on the team. He even says, "Um, put the puck in the net" and "Um, 110%" more than anyone else on the NHL. It could have happened back when Weight left.


My girlfriend is very, very angry at whoever just hit Lupul in the face with that stick. She wants his face intact.


It seems that MAB doesn't like sitting out. Nice work Mac.


You tell Vanessa I'm with her. We may have hot Oilers, but Lupul's our only beautiful Oiler.


>We may have hot Oilers, but Lupul's our only beautiful Oiler.

No shit. He's the only guy that seems to be wearing mascara.

What's this about MAB sitting out? (start on the clock on Vic "correcting" me... ;-)

With this score, I can't believe Grabia's watching... ;-)

He was benched a couple days ago.

Hey, that Mayers fight sparked the Blues offence. That economist is a genius!


Yeah, MAB was benched for a couple games there. Vic contended it was in injury, as benching MAB made "no sense"...


Vic contended it was in injury, as benching MAB made "no sense"...

It wasn't injury. Vic is on crack.


Grabia - the PP has gone from 23rd in the league to 8th so far tonight. You need to give these things time.


Speaking of crack, Grabia. How 'bout that power play?


Grabia - the PP has gone from 23rd in the league to 8th so far tonight. You need to give these things time.

Coming from the guy with the "Fire Craig Simpson" header.

Speaking of crack, Grabia. How 'bout that power play?

One game, RiversQ. That sample size is insufficient. Stop being so message-boardy.


It's nice to see the PP finally run roughshod over another team. Even if it is a crappy team. Right?


That sample size is insufficient. Stop being so message-boardy."


This may be the week no one on the internet suggests a Schremp callup.

Shall we call it Christmas?


Man, we sure could use Robbie Schremp right now.

I was baiting you, there was really no choice on your part.:-)

I was baiting you, there was really no choice on your part.:-)


I believe the vaunt may have finally showed up!!;)


I believe the vaunt may have finally showed up!!;)

True, but it was the Blues. I'll wait and see how we do against the Wings, Flames and Ducks before I start getting too giddy. But tonight I can at least do a little dance.

As much as I hate the Oil (and that's a lot) I've always liked Ryan Smyth. Good Banff boy. I was glad to see the Liles hit look much worse than it was.

Says the guy whose team lost to the Capitals and the Bruins.


As embarassing as the Caps loss was at the time, they do have one of the best players in the world on their roster and they are (right now) a playoff team. So, there' no real shame in losing that one. Not like, say, getting creamed by the Coyotes would be.


So, there' no real shame in losing that one. Not like, say, getting creamed by the Coyotes would be.


I don't think the pain I felt at the end of an 11 round shoot-out compares with the pain I'd feel if my team got hammered by the Coyotes, but then I don't really know what that would feel like, so I can't say.

Seriously...there are lots of guys more skilled but does anyone want harder?

I wish this 94 had shown up in last year's Cup Finals because if that was the case then we'd be talking a lot more smack right now;)