• I erroneously added a loss to the Oilers in the standings in the sidebar. It has been corrected. My apologies.

• Your 1st place Edmonton Oilers play their third game against the Colorado Avalanche this evening. The Oilers have played all their Northwest Division rivals at least twice already this season, with the exception of the Minnesota Wild, who they have yet to face. I don't normally desire to see the Wild play anybody, let alone the Oilers, but this year is different. I'd like to see how the Oilers match up. The two teams don't actually meet for two more weeks, on December 14th.

• It remains uncertain how long Ales Hemsky will be out for, but it will likely be at least a couple weeks. The Oilers have called up Marc-Antoine Pouliot, who, unlike other call-ups before him, will actually see some ice time. The Oilers roster is pretty banged up right now, with Hemsky, Ethan Moreau, Steve Staios, Shawn Horcoff, Marc-Andre Bergeron, and Jussi Markkanen all either injured or ill. Joanne Ireland is reporting that Horcoff, Staios and Markkanen will all likely be in the lineup this evening, while Bergeron is still questionable. He apparently has pneumonia, so I don't even know why his playing is being considered. The Oilers should play Danny Syvret.

• The injuries mean that lines will be shuffled. Petr Sykora is going to have to find a couple partners to dance with, for example. I don't know what Craig MacTavish is going to do, since some of the others who were in slumps (Pisani, Horcoff, Torres, Stoll) have played much better of late, and probably should be left with their linemates. Then again, other than the first line (Smyth, Horcoff, Pisani) and the Hemsky/Sykora pair, it's been a blender all year. I suppose it will just continue. I'd put Sykora on a line with Stoll and Torres, myself, or maybe Stoll and Winchester. 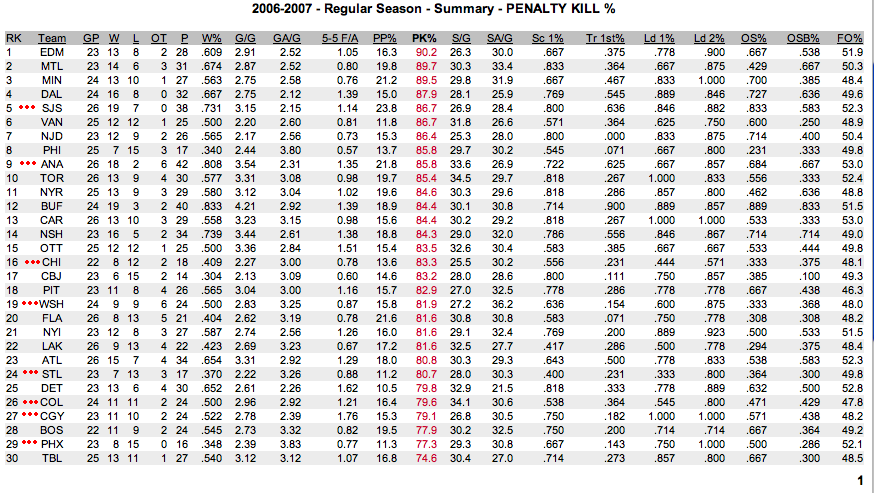 • The Oilers have allowed powerplay goals in 8 of 23 games. The breakdown is below, in red. Beneath that list is another, indicating who has scored on the Oilers, and where that team stands in the NHL's power play rankings. It's interesting, but perhaps unimportant, that of the 11 powerplay goals the Oilers have given up this season, 4 have come against the top two power play teams in the league. 6 have come against teams in the bottom 7 of the power play rankings. 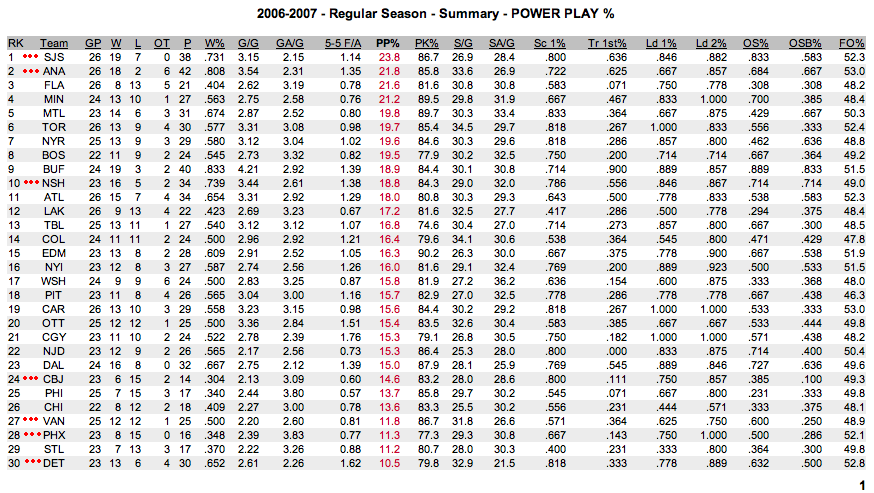 • I'm pretty sure there is zero value in what I just pointed out about the power play and penalty kill. I know I'm blurring cause and effect, for example, implying that the Oilers can only score against teams with a bad penalty kill, when in fact the teams may have bad penalty kill rankings because the Oilers scored on them. But I think if it was a stat followed over the length of the year, it might provide some insight into both special teams units. It would be like looking at strength of schedule, except for the special teams. Or I'm totally out to lunch. Vic? RiversQ? Tyler?

• Don't forget to vote today and tomorrow for The Battle of Alberta in the Canadian Blog Awards. We made a strong move yesterday, and need your help in securing a victory. Remember, only communists support basketball.

Prediction: I'm going to see 321 to -678, Oilers, then go back and change the score after the game is over. That has to be what Matt is doing, right? If not, I need him to buy me some lottery tickets.


The gap has narrowed to less than sixty. Amazing what happens when you actually advertise.

So is there a third, one-on-one, round?


Don't think so. I think this is it, so we need everyone to vote today and tomorrow.

Is it my internet connection, or is blogger being a pain in the ass this morning?


It's interesting, but perhaps unimportant, that of the 11 powerplay goals the Oilers have given up this season, 5 have come against the top two power play teams in the league.

Also you have one too many "e"s in Sykora's first name.


Shit. I thought Anaheim scored one in each game. Thanx, Earl.


didn't MAB get either pneumonia or mono that first camp that he was expected to make it? Wasn't he one of the guys that missed time in the conf finals with the flu?

somebody get that guy some vitamin c or something


Andy, that analysis of the PP vs PK was, as you suggest, absolutely useless.

I'm unsure if correlation could be made that there are some PP's that thrive on facing top PK units. Which is what I think you are trying to find.

Bottom line, if the Oiler's PP is currently getting away with gettings its GF versus the crap teams -- well, if it helps them win then that is all good.

If the PK is getting away with preventing GA against virtually all teams. Than that is going to help the win.

To my eye, the past 5 games have had more down-low options being tried on the PP. The point shots are from more "top of the cone" positions rather than at "top of the ice cream." It might become a bag of suck without Hemsky, but it is certainly doing a little more of what you want of it.


Ironically, it was MAP that got Pnemonia that camp, not MAB.


To my eye, the past 5 games have had more down-low options being tried on the PP. The point shots are from more "top of the cone" positions rather than at "top of the ice cream." It might become a bag of suck without Hemsky, but it is certainly doing a little more of what you want of it.

Agreed. I thought the PP looked pretty damn good against Anaheim, especially that last one in the 3rd. We just couldn't get the goal, damn it all to hell. And lots of down low attempts, which I am all in favor of.

I didn't get to point this out, because we choked on it, but it seemed to me like the "vaunted" Duck defence looked all kinds of Suck last game. They couldn't handle the cycling down low, especially the cycling by the Smytty line. Unfortunately, the Oilers decided to sit back for the last 30 minutes, and it disappeared. But in the 1st especially, they were toying with them.

I'm unsure if correlation could be made that there are some PP's that thrive on facing top PK units. Which is what I think you are trying to find.

I'm trying to determine if some PP's thrive on facing weak PK units. I agree that if the pp is scoring, it doesn't matter who it is against. But the same goes for wins, and yet we all like the strength of schedule analysis. Why couldn't there be something like that for special teams? I'm just throwing it out there, because that is all I can do. I don't have the data, or the training.

How did you see that, if you saw that it was sixty this morning? You can't see unless you vote, can you?


And Smytty wonders why the team's not giving him a contract? It seems like guys become awfully brittle all of a sudden when they get a long-term deal.


It seems like guys become awfully brittle all of a sudden when they get a long-term deal.

I wonder if you could corelate injuries vs 'just signed' or 'option year'. Maybe there is something to that, maybe you relax too much when the money's in the bank, and you've got your head on a swivel if you're in option country. I could definitely see point production being inversely proportional to contract status, but injuries..hmm.

translation: those guys get sick, we win.


I don't really know what to make of this one. Can Roli keep playing as well as he was before the Getzlaf OT goal? With 83 out and MAB sick and who knows what kind of shape Staios is in...this would be a bad time for Roli to backslide a little/.


Man, I forgot all about Liles. Then again, so did all of the rest of you.

And can they stop talking about the Ducks?


God I hope they don't trade for a veteran defenseman. THAT would be a mistake.


God I hope they don't trade for a veteran defenseman. THAT would be a mistake.

Didn't look like Roloson was much help. LT. 6 goals on 14 shots?

Roloson was poor, no doubt. But this team is so bad on the blueline that it needs to be addressed.

I do think the Oilers lose this game no matter what, they seem to have been skating in a fog early.