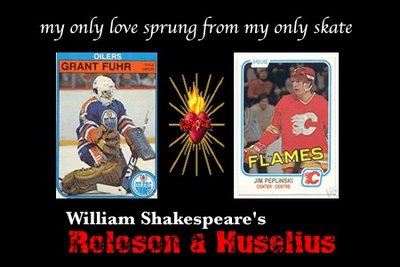 Two hockey teams, both alike in dignity,
In fair Alberta, where we lay our scene,
From ancient grudge break to new mutiny,
Where civil blood makes civil hands unclean.
From forth the fatal games of these two foes
A pair of numbers-crossed fans make their blog;
Whose misadventured piteous posts
Do with their sudden brilliance spark their fans strife.
The fearful passage of their death-mark'd rivalry,
And the continuance of their commenters’ rage,
Which, but their teams end, neither could remove,
Is now the steady traffic of their blog;
The which if you with patient ears attend,
What you shall miss, their site shall strive to mend.

• Huge game tonight, and I will be there. It's my birthday this week, and a good friend is taking me. YES! Between the game, the release of new Beatles and Jay-Z albums, the receiving of gifts, as well as my eventual birthday gathering--where I shall engage in meaningful conversation on Norse mythology and partake in a nunchuck battle with a deranged, drunken orangutan--it's going to be a fantastic week. My cup runneth over.

• The Oilers called up Zach Stortini Monday. The press release notes his points total for the year before his penalty minutes, but I'm fairly certain that the latter will be of greater import this evening. My guess is that Stortini will be in the lineup to protect Hemsky and others from Calgary's leap-happy defence.

• Andrew Ference has a new playlist up on ITunes. He's obviously a punk rocker, throwing out some Bad Religion, Face to Face, Offspring, Pennywise, Minor Threat and Vandals. But it was his Elliott Smith pick that impressed me the most.

• Brad Winchester is #9 on Mirtle's "Best Players You've Never Heard Of" list. I'm thinking "Winnie" is more Warren Young than Lowell Macdonald, but I'd be happy to be wrong. But the real question is how high Mägni Thöroson the Ëlectric Nörseman will be on Mirtle's list. I'd suggest that James put him in the top three. The Gods will not be mocked, my friend.

• RiversQ has some Even Strength numbers up on IoF. The general thrust is that Oilers haven't been very good at Even Strength. It's definitely worth a look. So too are Tyler's numbers. They take a look at Even Strength Strength of Schedule for the Oilers and Flames. Tyler suggests that both teams have been so-so at Even Strength because they have been playing really tough opponents. Some more traditional numbers worth looking at for tonight's game:

• Needless to say, the Oilers need to take advantge of the Flames weak PK.

Prediction: 4-2, Oilers. Smytty, Sykora, Pinto, and Horcoff with the empty-netter to seal the deal. Pinto gets three points on the night. Stortini fights Phaneuf, and I fight Phaneuf's mom. She wins, I dislocate my shoulder, and LT is forced to avenge my defeat by going all Gary Unger on her the next time the two teams meet.


I sense OT tonight, for some reason.

Anyways, 3-2 Oilers, Hemsky goes for 2G, 1A. Stortini beats up McCarty after Phrankeneuf refuses to oblige young Zach's overtures to drop the mitts and have at 'er...


What, no mention of the Flames calling up Giordano?

(Is it just me or does 'goilers' sound like some disgusting, hairy growth that you would need surgery to remove?)


Thou hast outversed me, my dear bard.

Good luck tonight on your venture; may we each find our way to drunken victory.

Terry Jones is fired up and ready to go!

Enjoy the game, and happy birthday to you.


Someone's in a good mood!

I think I read that former Sudbury Wolves' captain Zach Stortini is not going to play - they just wanted to reward him for his progress so far (?!)

Perhaps his mere presence in the building is meant to intimidate?

As for the anonymous linker...Staios signs for 10.8M


Wow, Terry Jones managed to turn an article about the Battle of Alberta into one about food. Who's surprised?


Black Dog said...
Perhaps his mere presence in the building is meant to intimidate?

Yeah, intimidate Pisani perhaps? There isn't much room on RW is there?

Andy, what is up with this multi-day/event birthday celebration? One would think you were Imelda Marcos or the Queen.

Bring your phone tonight- I'll try to buy you a 7.00, flat beverage at the game.

Sports Matters will also be in attendance at tonight's game. Well, a couple of us at least. We'll make sure Andy's drunk enough to get into a spat with Mick McGeough if he happens to be working tonight.


Have the numbers guys seen the Ireland article on Gator? They might want to email either her or Smith, just to give them an idea of why his +/- is so bad. Nothing about hard minutes. Nothing about going from #2 or #3 to #1 on the depth chart.
According to Ireland, it's because he played with Pronger last year, and Pronger had those "crisp outlet passes." I couldn't make this stuff up if I tried.


Yep AG...that's why the blogs are THE place to go if you want the real skinny on the Oil.

I was reading that Ireland piece and I wanted to see her mention how Smith was getting all the tough min and how a minus isn't just a minus but there was no mention.

And as for that Jones piece...I mean he must have written that tongue in cheek...or in this case piece of meat in cheek.

As for a prediction...I would't bet on the Oil in Cgy and I won't bet on the Flames in Edm either. Cgy has taken too many points out of Rexall the last few years and I don't believe that will continue.


The thing with the Ireland piece is that she didn't even say Pronger helped Smith out because of his strong defensive play, his ability to clear the front of the net, his eating up minutes, etc, etc.. It was because of his outlet passes. I'm sorry, but that has to be one of the most absurd things I have ever read in a sports story.

that and unless my eyes deceived me, the Smith-Pronger pair was not implemented until the playoffs.

the one correct piece of information was that 6 of those minuses came in two games. -4 in 18 games is a little less heinous. Against top opp. With forward lines that were still finding their legs.

Speaking of top opp, I don't watch many Flames games, but if I'm not mistaken the Flames turned their record around when they Phaneufed Dion back into the 2nd pair. I'm going to go look at some shift charts to confirm


yes indeed. Nov 1 loss versus Detroit was the last Phaneuf-Regehr paired game. They lost to CBJ in a shootout, went home and got the matchups they wanted and started winning.


I don't understand these comments -- unless you are using the contemporary definition of 'phaneufed' which means to shut down the other side, while delivering a truckload of hurt at the same time.

The Dion has been paired lately with Hamrlik (they are the top pair) and is playing 22-25 minutes a game and leads the team with a +10. And there have been no even strength goals against since before Remembrance Day.

Gonna be a good one tonight, go Flames.


I don't understand these comments -- unless you are using the contemporary definition of 'phaneufed' which means to shut down the other side, while delivering a truckload of hurt at the same time.

I guess -- unless you are using the definition of 'contemporary' which means early in the regular season and not in the playoffs when it counts.

Several drinks in, Sleek out.


Does anyone know where to watch this game on the internet? TVU doesn't seem to be carrying this one.


I just got home and was about to ask about TVU. Currently I am engaged in a staring contest with a penguin. Any help would be appreciated.


"Pinto's Revenge" my Flaming red butt. Where does that name 'Pinto' come from anyway? Is it Czech for 'giveaway'?

My man Jarmoe put up with a lot of (often deserved) abuse on this site last winter -- I respectfully submit that it's time to start abusing the most overpaid Oiler on this year's roster.

(typing this between the second and third period, I would usually expect Alice to exact some sort of karmic revenge on me, but I'm satisfied it's not going to happen tonight.)


The math guy on 630 CHED tells Rod Phillips that the Oilers are now #1 in the NHL on the PK.

And if the Oil can pot a 3-1 goal (Smyth, lets say), Rolli should end up with a better SV% in the month of November than a moron on the other end of the ice.


I can't believe I've actually stared at this penguin this long in the vain hope that the game would come on at any moment.


(typing this between the second and third period, I would usually expect Alice to exact some sort of karmic revenge on me, but I'm satisfied it's not going to happen tonight.)

Two assists, including one on the game winner. He's a high risk man, but sometimes they pay off.

Incidentally, Hemsky is still scoring at around the rates he was last year. Jarmoe not so much last year, despite it being the NEW NHL!


Special thanks to peter there. Two 1st assists for Hemsky and a win for the good guys. Jarmoe slinks back to Calgary with nothing. All is right in the world.

I'll be sad beyond belief when he leaves next summer.


Well, that was unpleasant. Sykora sure looks like a good pick-up for your side.

Jarmoe is way ahead of where we were last year at this time and created a lot of chances tonight -- there was just no finish (sigh). Even though Alice caused me some karmic pain in the end, I enjoyed watching him kack up the puck all night. Too bad my side couldn't cash in on all the chances he gave us.

Fun game to watch tonight, except for that unfortunate business near the end. New Years Eve should be a good one.


Andy, was there a Sportsnet camera in your face following Sykora's second? If so, I saw you!


What a crap game. Both teams looked like they were doing their damndest to lose.


ROLOSON CRUSHES ALL ONCE AGAIN.


Just got home from the game! What a weird game....boring at times, both teams played blah hockey but the Oilers had some moments of brilliance (hello Roli again! That man is a god). Also, it wasn't until the second period until I remembered, hey Iginla plays for Calgary. Really. He was beyond invisible tonight! Awesome.


Andy, was there a Sportsnet camera in your face following Sykora's second? If so, I saw you!

I have no idea. I had my orange jacket on, and I have a shaved head and one too many chins. Sound familiar?


Question for the floor: Kiprusoff's shiner? What gives?

Also, speaking of Sportsnet, did anyone catch Mike Brophy's explanation of why he supports the puck-over-the-glass penalty? I think it boiled down to "NHL players are skilled enough not to shoot the puck over the glass".

Huh? So... Staios put his team down a man while defending a one goal lead... on purpose? Gwa?


Most retarded rule this side of the crease rule.

Not that it hurt us this time, but I still have flashbacks to G7 of the ECF last year.


That play was Smid's fault. The puck never shoud have gotten to Staios. Smid curled back into his own end with the puck, when he could have curled out and pushed it out to centre of the Flames blueline.