Woo-hoooo!!! The lopsided rivalry continues! This will be the first of ten games between these two teams. Looks like only three of the Oilers regular forwards from last season are in the game, with Smytty, Hemsky, Lupul, Sykora, Tracktor Boy, Gator, and Gilbert sitting out. The Flames seem to be dressing all their regulars. Good to know. An absolute win-win situation for the Oilers. We lose, it doesn't matter. We win, and the Lames got beat by a bunch of kids.

For the Oilers, an interesting training camp has turned into an interesting pre-season. Personally, I don't know how the team can keep Winchester, Mikhnov and Schremp off the roster. And Gilbert and Thoreson continue to impress. What to do? I'd feel a lot easier about this situation if Schremp, Mikhnov and Thoreson could go down to a farm team together. But if they are sent down, they're likely to be split up, and receive ice time at another team's discretion. It's well known that I'm not one of those on the "we have to trade for a defenceman now!" bandwagon, but it does seem logical that if these guys continue to impress at camp, another forward is on the move. I mean, you look at this roster, and tell me how to make all the pieces fit. 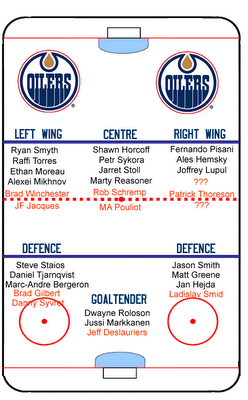 
Thoreson pots the winner in a 5-2 Oilers romp.


Read MacT's comments on Mikhnov's skating today - I owuldn't be so quick to write his name in pen yet.

Thoreson's the wildcard - how will he do now that the competition is stiffening.


What about Toby P.?

It sure seems like we haven't heard much from Pouliot and Jacques, so maybe that answers the forward question outside of the Petersen omission.

One thing to keep in mind though is that the rosters generally get better and the benches are managed with more of a purpose as preseason progresses. I think we've seen a few young guys hit the wall in the 2nd half of preseason in years past, so the tough decisions should probably wait until then. I think they'll sort themselves out pretty well.


I was going to make a comment earlier about who Brad Gilbert was, but I thought it was too nit-picky. Glad to see no one is cutting Grabia any slack.


Kudos on the "preview"


joninabox said...
I was going to make a comment earlier about who Brad Gilbert was, but I thought it was too nit-picky. Glad to see no one is cutting Grabia any slack.


Actually I'm usually the only jerk that does that.

I could use some company though. You could start by posting about how Grabia is completely bat-shit crazy for putting Thoreson at RW in his depth charts. (Whether Thoreson plays RW or not or if it even matters.) I don't know him really at all, but I can tell Andy relishes extensive criticism of his depth charts.


I know saying such in other places would be blasphemy, but what is the general opinion on dealing Schremp as the centerpiece of a package to land a d-man (other pieces I'd be willing to move would include ANY draft pick, Winchester, and Bergeron).

I think the guy COULD be very good, but this team COULD be a threat to go deep again if they can get that top pairing defenseman without breaking up the top-nine forwards they have in place.


I don't like the idea. Schremp could (and in my opinion will be) a top 6 forward, and the Oil will have him for 6-7 years before he hits unrestricted free agency. Unless you can get an all-star calibre defenseman - preferrably one who the Oil can lock up for 4-5 years (Brad Stuart, perhaps) - it's a gamble I wouldn't take.

You're right, the Oil could be a threat to go deep in the playoffs. But with the parity that exists, they could also be a threat to finish 10th in the western conference.


I'll beg a little forgiveness. I always get the name confused for some reason. Plus, my house was broken into today, while I was sleeping, and my wallet, phone, laptop and car were stolen. Needless to say, I could give a fuck about Gilbert's name or Thoreson's position right now.
I'm a little more worried about my car, all my work and writing on my computer, and the fact that some fuckheads could have killed me in my sleep.

Oh, and I'm ecstatic about the fact that I called the police four and a half hours ago, and they have yet to arrive at my place. Just ecstatic. All this time I could have been gathering up the broken pieces of my life, and Edmonton's finest have decided that they'd rather just make me wait for them all evening.

Oh, and I'm also ecstatic that there have been five break-ins in my building in a week, and neither the condo board or the property manager thought a) they should send a letter around to let us know, or b) that they should actually secure the building.


Sorry to hear that Andy. That sucks.


Graby — that was the wrath of Tom Gilbert. Now you know not to cross him again.


Graby — that was the wrath of Tom Gilbert. Now you know not to cross him again.

Not even the slightest bit funny.

I won't be back for awhile. Matt can lead the charge.


jesusallahbuddah that sucks man. Forget this blog and take care of your shit man.

Good luck, cause what just happened to you sucks.


yeah, take care of yourself Andy, don't worry about the blog till everything's back in order on your end. Have a drink or five....


Suck it up princess. The BoA pauses for nothing.


Suck it up princess. The BoA pauses for nothing.

You mean nothing other than Siberia, right princess?

Sucky tale...makes me paranoid and angry. You need a fundraiser.


I told you it was time to get the hell out of that town . . . the Steelers need some love too, ya know.


Hey Nice blog,
Just found it this morning, after listening to the game last night on the radio and hearing all the Flamer fans rippin' the Oil, it sure was nice to come to work and slam all these hopefuls around me.
Lates
JP


it was a bit funny.

break ins happen. hell, shit happens. someone broke into my car that was parked right outside my hotel room, stole all my clothes, ripped half the roof open, broke into the glove compartment using my souvenir dave matthews band pen. they caused almost 2 grand of damages and someone in some buttfuck town has my underwear. if you can't laugh at it, it just leaves crying.

there's always a positive. i mean they didn't slit your throat in your sleep.

and they were probably flames fan. heck it was probably matt thinking if he took your computer you'd stop kicking his ass on posts. drive down the road 2 nowhere and check out his dna.

and the oilers won.


That sucks, Grabia. Good luck with that...


Sorry to hear about that Grabia.

Here's hoping the punk gets hit by a bus.

But not while driving your car.


That totally sucks Grabia. Sorry to hear that happened. Hang in there. Karma and all that, the punk(s) will get what's coming to 'em...


Yikes, sorry to hear about the break-in...but at least you're all right...the other stuff is replaceable. And it's really inappropriate the cops are making you wait for so long. That's hardly the right time for a donut break.

We got broken into a couple of years ago...they stole our DVD player interestingly enough the batteries from our remote controls.

I don't know, maybe they needed it for their Discman or something.