The Oil has an awesome opportunity tonight to move into the NHL's Final Four, in front of the raucous home crowd. One can only hope that today's Oiler players take a hard look up at the rafters -- preferably during a lengthy pre-game interval from the comfort of the players' bench -- and gain some inspiration from the proof of success hanging there. 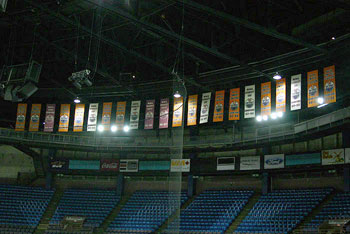 Add in the accumulated heart, guts, knowing-how-to-win, and 17 Stanley Cup rings of Lowe, Mac-T, Huddy, and Simpson, and how can they lose?

UPDATE: Cosh has photos from today's "support rally", which if nothing else demonstrate the upside of 30-degree weather for playoff hockey. He's characterizing it as a positive karmic development; who on earth am I to argue? The chances of the Oilers getting their "One more win" looks good.


You bastard. Why not throw in a Joey Moss reference too?


It doesn't count as a jinx if you do it in purpose, you jerk.


I know that your team got eliminated after similarly disgusting displays of hubris but it doesn't count if you're a fan of another team trying to jinx us.

We all live with terror and half-expect to blow the next two.


Sweet! Almost all the heavy hitters have weighed in. Now I just need Cosh to get back from the It's Not-A-Parade! It's a Moving... Car... Exhibition.


Now I just need Cosh to get back from the It's Not-A-Parade! It's a Moving... Car... Exhibition


I believe we are referring to it as a 'support rally'


Add in the accumulated heart, guts, knowing-how-to-win, and 17 Stanley Cup rings of Lowe, Mac-T, Huddy, and Simpson, and how can they lose?


It's a good point about not being able to jinx another team. And if you don't think I'm excited about the possibility of referring to the organization as the Edmonton Paraders for a couple of months, well, you haven't been reading this site long.


And Cripes! I somehow missed this the first time through Terry Jones' piece:

There's talk of another orange banner being raised to the rafters if the Oilers win another game.

"I think it would kind of be symbolic of a departure from the glory days," said Lowe.
[...]


Look Matt, we're all aware that some of the local yahoos are getting a bit dangerous. If you would just STOP FUCKING POINTING IT OUT, I'd greatly appreciate it.


Let the record show that Mirtle is a Canucks fan (or at the least not an oilers fan) and thus his Roloson jinx should be ignored by the hockey gods and Stan Weir.


Mirtle, bite your tongue! I was laughing while reading the comments then entered near panic after yours set in.

Matt, when's your next tee off time? Say hello to, what do you guys call him - jarmoe? - for me.


I was going to cheer for the Paraders tonight as a sort of karmic hex, but I did that on Sunday and it did not work out well for me. I think maybe what I really need is to wear a Paraders shirt and cap and maybe get a Paraders flag.

Were they selling any of those at the Parade?


Seriously, you're gonna look at the Roloson truck and tell me that was a parade? The English language is laughing at you.


According to the Press Release (put out by the Paraders themselves) it's not just a parade, it's a procession. If that's not shaking a big fat middle finger at the hockey gods, I don't know what is.


Damn, looking at those photos, I'm thinking that it wouldn't have been all that difficult to soup up my Hyundai to win the grand prize.


I didn't even shoot the pickup truck that won the whole thing (it's behind the dude in the hockey mask and overalls)--I didn't realize the dull orange colour had been applied specifically for the contest. In fact, I suspect Laforge may just have handed over box seats in honour of a coat of primer.


Why do I have the feeling that the beardy weirdy that Cosh has repeat pictures of in his slideshow is somehow a relative of his? Or maybe it's actually Cosh himself, in a deep stage of beard growth. Has anyone actually seen him since the playoffs started?


Seriously, you're gonna look at the Roloson truck and tell me that was a parade?

That picture right there pretty much sums up Edmonton better than any description could. If you could see an Ikea in the window reflection or something, we could pretty much use it as our coat of arms.


"I know that your team got eliminated after similarly disgusting displays of hubris but it doesn't count if you're a fan of another team trying to jinx us."

I think the attempted Joe Thornton jinx was evidence enough. The harder Matt tries to jinx the Oilers, the more he ensures their success.


Better yet, Kyprios just agreed with Fenwick that a pre-victory "parade" is a jinx.

For sure we are in the clear now.


And the Matt anti-jinx continues! It would only be fitting if all of Matt's efforts ended in an elimination of the team that knocked the Flames off.


The funny thing is, Matt's post now appears to the casual reader to be entirely in earnest. He really should have concluded it with "No doubt the Oilers will give my thumbsucking Flames yet another lesson in how to play when you're up 3-2 in a playoff series."


Good to have you on the bandwagon, Matt. ;)


I think the Calgary half of The Battle of Alberta is sufficiently in the fetal position now, Oiler lynch mob.