Boy, there's a lot I want to get to by Friday, and I barely know where to start, so how about this. As part of the ongoing series, here's the standings for the "4th Quarter" of the season. I know throwing out the last two games is a bit capricious, but most of the 81st/82nd games of the season involve at least one team for whom the result is unimportant, so there you go. Anyway, The East: 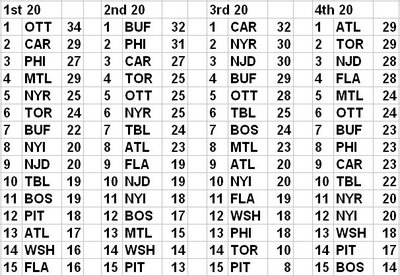 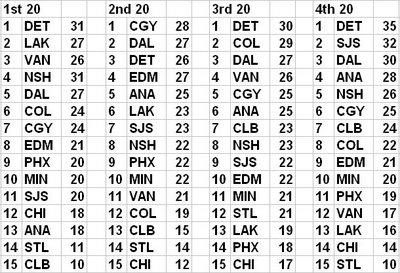 Detroit's 35 points in the 4th quarter is the best quarter by any NHL team this season. If the Leafs had had a merely poor 3rd quarter, they'd be in the playoffs. Offseason moves are a total wildcard, but the early favourite for a breakout team next season has to be the Blue Jackets. Give the credit to Joe Thornton for the Sharks' surge if you like (Joementum!), but their 4th quarter was WAAAY better than their previous 40 games, when Joe was also in the lineup. Related: be careful about handing a 1st-round victory to the Sharks too quickly. You'll note that Nashville had 26 points over the 4th quarter; what you may not know is that in their last dozen box scores, only one features Tomas Vokoun as the Winning Goaltender. There's ample reason to dismiss the Preds' Cup prospects, but they are not a Bad Team.


Interesting note for Detroits strong 4th quarter. 14 of their 20 games were against non-playoff opponents, and 9 of them were against St. Louis/Chicago/Columbis. I won't take anything away from them, though. The Oil will be hard pressed to get through them.


Seems like Calgary has been consistently better than Edmonton throughout the year.


Yeah, Calgary never had a quarter where they were much better but they were slightly better all year. That was your point, right?


My point was that they were better each and every quarter.

To take it further, the Flames also won more games than the Oilers, and won the season series. The Flames won the division title and is sitting pretty in 3rd in the west, while Edmonton has to play the best team in the league because they barely squeaked into the playoffs only after Vancouver and LA completely collapsed down the stretch.

But my point is just that the Flames were a better team throughout the year than the Oil, that's all.