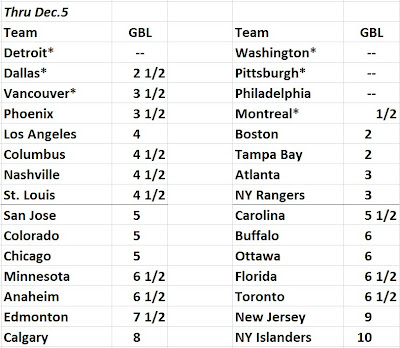 
I think I wrote somewhere awhile ago that going for it was certainly a sensible mater plan for Sutter to employ.

But by god has the man ever bungled things.


"What gives you the best chance of being at or near the top? Having a bunch of guys outplay their contracts."

So true. But I'dd suggest incomplete:

You also need guys who outplay the opposition's best, and one doesn't necessarily need to be the other.

Leveraging every dollar available to you is more like it. You pay Laraque 1.5 mil, you just burned 1.5 mil and a roster spot. You pay Gomez 7.3 mil (an overpay, sure) and he threads water when everything goes wrong and actually outscore top-tier opp the rest of the time; say this is worth 5 mil... You are down 2 mil, but you still have the "hold even with the opposition's best" figured out and then your contract out-performers are to be, say, able to outplay 2nd tier or 3rd tier opp.

I wrote Gomez but Horcoff might be another example. My point is: what makes the Oilers (and made the Blackhawks) so precocious is that their kid on EL deals might turn into tough comp out-scorers in said deals.

That, to me, means they must be careful not to put some Laraque on their rosters; paying for quality is fine, especially RFA quality. Hell, you may even over pay a bit, you still have a beast on your roster. Just don't pay 2.3 mil for Vandermeer.

Anyhow, it's a stream of consciousness rant, hope my point comes across...


The 12-13 season has the following possible resigns:

Considering we have ~13M in space right now and no big signings next year I consider 12-13 to be fairly safe from a cap perspective. The only problem is you may have to make premature decisions on Penner and Hemsky if the rooks look like good bets to get big pay days.

Recently Chicago did it with Toews and Kane on the last year of their ELC, and the Pens did it with Crosby on 4 and Malkin on 3.