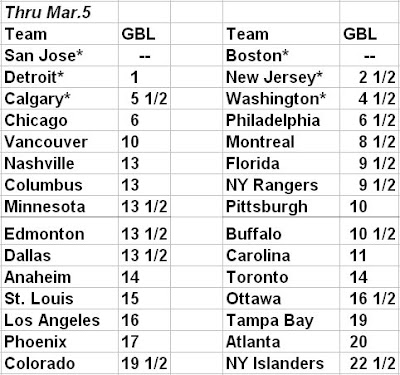 **Including tonight, there are 38 days left in the season. Pittsburgh really saved their season with this 5-game win streak (4 on the road). Now, not only are they (slightly) in a playoff spot, but they only have 16 left to play. By way of comparison, the Hawks have 20 to play, 6 other NHL teams have 19, and a bunch more have 18. That's a fairly big rest difference over the next 38 days. (And come to think of it, something to consider when handicapping Chicago's Rd1 series.)

**Predators! Arrows! Steve Sullivan! Nashville! Young defencemen... hitting their stride! Jason Arnott! Coaches... with no necks! I like it, I love it, I want some more of it! [/Steve Armitage Voice]

**So just in case this wasn't the case before, I assume we're all hoping that the Ducks wither away without much of a fight. Why would anyone (aside from their primary fans) hold any vaguely warm feelings about them at this point? They just won the Stanley Cup, and now were sellers at the deadline, a week after the GM gave a giant MEH to 7th/8th place.

**Think the Canucks and Blackhawks are going to have scouts at each other's games much over the next month?

The PPV last night was very enjoyable. I like Kerr in the PbP role, and the production of these things has just advanced a thousandfold in the past 2 seasons.

Tonight, with Peter Loubardias on the mike, the Flames face Erik Cole for the 5th time this season. The first four times, he was probably the best player on his team. With the lads playing part two of a B2B, I'll take Calgary 4 (Iginla in OT, Phaneuf, Aucoin, Moss) Carolina 3 (Cole, Staal x2). Go Flames.


Agreed on the PPV quality. If Kerr could calm down just a bit on goals and fights, he'd be a pretty solid play-by-play guy. And he seems to draw the best out of Chuck Simmer (though that's not saying much).


I found the whole idea of the bit funny - and it still made me laugh - but I didn't think the guy did a great job on Armitage.